Objective To evaluate the joint association of sodium and potassium urinary excretion (as surrogate measures of intake) with cardiovascular events and mortality, in the context of current World Health Organization recommendations for daily intake (<2.0 g sodium, >3.5 g potassium) in adults.

Consumption of sodium and potassium is essential to health, as neither are produced endogenously and both are necessary for critical physiological processes.123 Maintaining homeostasis requires a mutual interdependence of sodium and potassium, meaning that their relation with health is necessarily linked.123 Despite these fundamental physiological considerations, current public health policy adopts markedly opposing guidance for sodium and potassium intake, with the World Health Organization recommending an extremely low sodium intake (<2 g/day, whereas the current average intake is about 4 g/day) but high potassium intake (>3.5 g/day, whereas the average intake is about 2 g/day) in the entire adult population.456 International data on the percentage of people with very low intakes of sodium and simultaneously high potassium intakes7 and the joint effects on health outcomes from large international epidemiological studies are limited.4589

A morning fasting midstream urine sample, collected from each participant, was frozen at −20ºC to −70ºC and shipped to a central laboratory in Canada, China, India, or Turkey. The samples were shipped at ambient temperature using the STP 250 ambient specimen shipping box (see supplementary appendix for a description of the methods used for performing urinary analyses). We used the Kawasaki formula to estimate 24 hour urinary sodium and potassium excretion from a fasting morning sample, and these estimates have been validated previously versus measured with 24 hour urine collection.3031 An international validation study reported an intraclass correlation of Kawasaki formula to actual 24 hour urine collections of 0.71.31 Therefore, we used the estimates derived from fasting morning urine as surrogates for sodium and potassium intake in the study. (The supplementary appendix provides summary details of validation of this approach.)

Standardised case report forms were used to capture major cardiovascular events (myocardial infarction, stroke, and heart failure), cancer, and death at follow-up, which were adjudicated using standardised definitions.32 For the current analysis, we included all adjudicated outcome events in the PURE database up to September 2017. The primary composite outcome was all cause mortality or myocardial infarction or stroke or heart failure. Secondary outcomes were individual components of the primary composite outcome, and new diagnosis of cancer on follow-up.

Baseline differences in characteristics between study participants in different categories of estimated sodium and potassium excretion have been reported previously (see supplementary appendix).25 Restricted cubic spline plots were used to explore the shape of association between estimated sodium and potassium excretion and outcomes, fitting a restricted cubic spline function with four knots (5th, 35th, 65th, and 95th centiles).34 Our primary outcome measure was the composite of all cause mortality and major cardiovascular events (cardiovascular death, stroke, myocardial infarction, and heart failure). Secondary outcomes included individual components of the primary outcome.

No patients were involved in setting the research question or outcome measures, or in the design and implementation of the study. 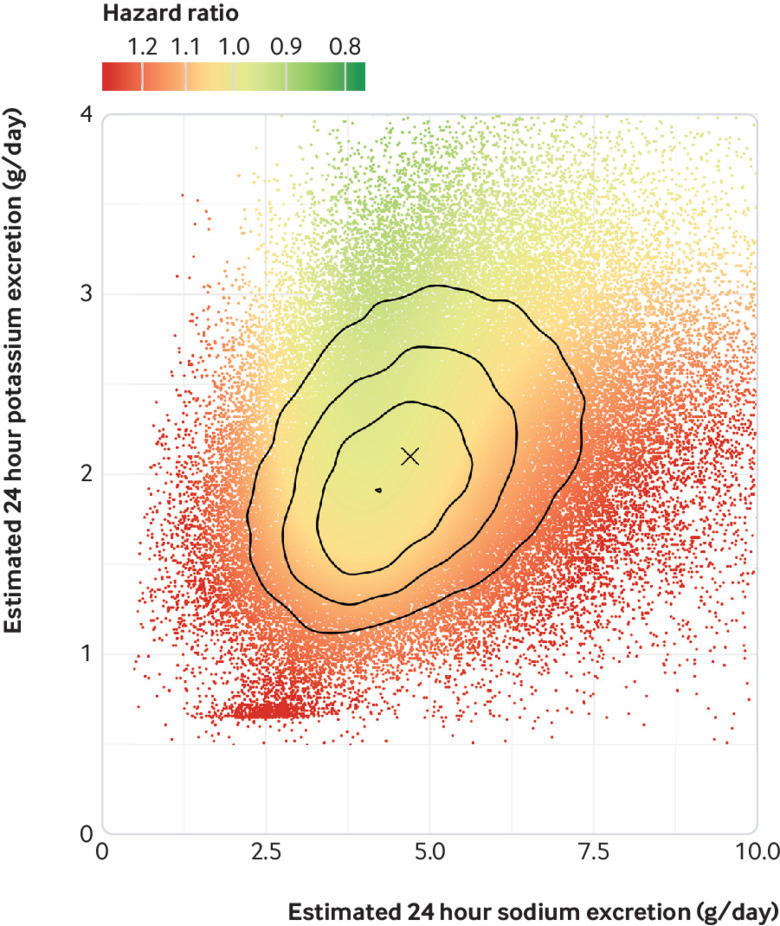 Heat map of risk for composite of cardiovascular events or death showing lowest risk in region of moderate sodium intake 3-5 g/day and higher potassium intake and highest risk in region of extremes of sodium excretion and low potassium excretion. The reference hazard for these hazard ratios was set at a value of sodium daily excretion/intake of 5.00 g and potassium daily excretion/intake of 2.25 g (median excretion of sodium and potassium), marked as X. The overlaid lines represent joint distribution quartiles; each region contains a quarter of the analysed participants. r=0.34

Figure 5 and table 3 report a stratified analysis by mAHEI thirds, which suggest a lower magnitude of risk for the association of sodium excretion with mortality and cardiovascular events among those with higher diet quality scores, although P for interactions were not significant (P=0.87 for below median excretion and P=0.30 above median excretion).

Exclusion of participants who had events in the first three years of follow-up, and excluding those with baseline cardiovascular disease, cancer (or cancer in first year of follow-up, diabetes, and current smoking), did not materially affect findings. (table 1) Supplementary figure 1 reports the association of “usual” 24 hour urinary sodium excretion and clinical outcomes.

Guidelines for dietary recommendations, targeting the entire population, should be both feasible and based on clear high quality evidence of improved health outcomes.45 Our results suggest that a combined strategy of low sodium intake (<2.0 g/day), while simultaneously increasing potassium intake to >3.5 g/day, is unrealistic, as only 0.002% of the population were in this range (0.2% for potassium excretion of 2.62 g/day, if we assume that about 75% of potassium is excreted in urine35). These estimates are consistent with reports from studies in the United Kingdom (0.1%), United States (0.3%), Mexico (0.15%), and France (0.5%).7 In each of these studies, estimates of sodium intake were based on questionnaire, which is known to underestimate intake, meaning that the proportion of the population achieving actual target may be lower than reported.7 This finding also meant that we were unable to evaluate the association of these joint dietary intake levels with health outcomes, as numbers of participants were insufficient despite the large sample size. We observed a linear relation between increased sodium and potassium intake, a consistent finding of other studies.720 These findings question the feasibility of increasing potassium intake while achieving very low sodium intake of populations through modifying diets. While small phase II clinical trials, such as DASH-Sodium,40 have achieved these targets in the short term, they required complete control of dietary intake, which is impractical in free living populations. In contrast, the PREDIMED study,43 which promoted increased intake of potassium containing foods (fruit, vegetables, nuts) with greater adherence to the Mediterranean diet, without focusing on low sodium intake, reported a statistically significant reduction in cardiovascular disease and mortality, and adherence to a Mediterranean diet has an inconsistent correlation with sodium intake.4445 In addition, a recent analysis of the NHANES study reported that sodium intake >2.3 g/day was associated with better diet quality, compared with diets of less than 2.3 g/day, meaning that improving dietary quality is likely to be easier to achieve within a moderate sodium intake range.46 These considerations raise considerable doubts about the feasibility and assumed cardiovascular effects of current recommendations to reduce sodium intake to very low levels (<2 g/day), which may counteract achieving other dietary targets and improving overall dietary quality.

Our estimate of sodium intake was based on a baseline measurement of sodium intake, derived from fasting morning urine samples, rather than repeated 24 hour urinary collections, which would be considered the reference standard for estimating usual sodium and potassium intake. However, our approach has been validated in an international study, against actual 24 hour urine estimates of sodium and potassium excretion.31 Other formula based approaches have been developed for estimating 24 hour urinary sodium and potassium excretion, and one study reported that the Kawasaki formula was associated with the largest bias compared with actual 24 hour urine collections. In that study by Cogswell et al,47 however, a non-fasting spot urine sample was used, which would be expected to produce biased over-estimates since the Kawasaki formula was developed and validated for a fasting urine sample, best reflecting basal excretion. In another study,48 which used an appropriate fasting sample, the Kawasaki formula approach was reported to be associated with least biased estimates (versus other formula) compared with actual 24 hour urine. Further evidence of the construct validity of our approach is the relation of estimated 24 hour urine estimates of sodium excretion to blood pressure (2.11/0.78 mm Hg/g increase in estimated 24 hour urinary sodium excretion), which are consistent with estimates reported in randomised controlled trials of sodium reduction.25

Relating a single time-point estimate of sodium and potassium intake to long term follow-up of death and cardiovascular events might be problematic if there are interval changes in dietary intake over time, and where repeated dietary measures are required to reduce the risk of regression dilution bias. Our approach is consistent with many other large epidemiological studies of sodium and potassium intake and analogous to epidemiological studies relating blood pressure, glucose, and cholesterol to clinical outcomes. For example, the correlation of office blood pressure and 24 hour ambulatory blood pressure and of fasting glucose to glycated haemoglobin (HbA1c), is similar to the correlation we report for formula derived estimates.31 We chose this practical approach to estimating population level sodium and potassium intake in the PURE study, which includes a large representative population of participants from high, middle, and low income countries. We deemed actual 24 hour collections to be unfeasible in many low income settings and expected to have a greater risk selection bias due to non-completion of 24 hour collections. For example, in a recent NHANES study,49 completion rates for 24 hour urine samples were about 75%, and completers differed from non-completed for age, sex, ethnicity, body mass index, and hypertension status. For these reasons, WHO suggests50 the use of formula derived estimates of sodium and potassium intake in population level studies monitoring intakes over time. Among studies reporting on temporal changes of sodium intake over time, there is stability in mean intake of countries,651 especially those with mean sodium intake in the moderate range (3-5 g/day), whereas some countries with high mean intakes (>5 g/day) have reported reductions in mean intake levels (eg, China, Finland),52 which means that interval changes in sodium intake are less likely to influence our findings in the low to moderate range of sodium intake but could reduce the magnitude of association in the higher sodium intake range.

Reverse causation has been a criticism of prospective cohort studies evaluating the association of diet and clinical outcomes, which may also occur when people reduce their sodium intake because of illness or based on medical recommendations. Alternatively, it may occur when people with a history of cardiovascular disease or risk factors, who are at increased cardiovascular risk, reduce their sodium intake on medical recommendations. In the PURE study, a few participants had previous cardiovascular disease, and our findings were not materially altered with their exclusion. Moreover, in the current analyses the exclusion of participants with cancer or diabetes or who were current smokers or those who had events in the first three years of follow-up did not materially alter findings. Additionally, we did not find an increased risk of death due to cancer with low sodium intake. Finally, given the observational nature of the study, residual confounding is a potential limitation. However, we adjusted for all major confounders of the association between sodium and potassium intake and cardiovascular events. Strengths of our study include the large representative international population in the PURE study, completeness of follow-up, rigorous approach to measurement of baseline variables, and adjudicated outcome clinical events.