Objective To determine whether restrictiveness-permissiveness of state gun laws or gun ownership are associated with mass shootings in the US.

Exposure An annual rating between 0 (completely restrictive) and 100 (completely permissive) for the gun laws of all 50 states taken from a reference guide for gun owners traveling between states from 1998 to 2015. Gun ownership was estimated annually as the percentage of suicides committed with firearms in each state.

Main outcome measure Mass shootings were defined as independent events in which four or more people were killed by a firearm. Data from the Federal Bureau of Investigation’s Uniform Crime Reporting System from 1998-2015 were used to calculate annual rates of mass shootings in each state. Mass shooting events and rates were further separated into those where the victims were immediate family members or partners (domestic) and those where the victims had other relationships with the perpetrator (non-domestic).

Conclusions States with more permissive gun laws and greater gun ownership had higher rates of mass shootings, and a growing divide appears to be emerging between restrictive and permissive states.

We used the 1998-2015 edition of the Traveler’s Guide to the Firearms Laws of the Fifty States to obtain the independent variable of interest, an annual restrictiveness-permissiveness scale of US gun laws for each state.16 This report is published annually by legal professionals as a reference guide for gun owners traveling between states and gives a rating between 0 (completely restrictive) and 100 (completely permissive) for the firearm laws of all 50 states. The report considers more than 13 factors in developing the score, including: standard firearms ownership and permit requirements; if semi-automatic, high capacity magazines, machine guns, and suppressors are permitted or restricted; if the firearms laws across the state vary widely; if the state employs a right to self-defense, ability to conceal, ability to open and vehicle carry, ability to conceal carry in state parks, or whether a gun permittee can carry in a restaurant serving alcohol; whether there is a duty to notify law enforcement of permit status; and if one can keep a gun in their vehicle at colleges and K-12 schools (primary and secondary schools).

We included the following annual measures of state-level characteristics in our analyses: median household income, percent high school graduation, percent female headed households, percent in poverty, percent unemployment, incarceration rate, and percent white. We took all covariates from the American Community Survey at the United States Census Bureau,26 except incarceration rate, which was obtained from the Bureau of Justice Statistics.27 We included year in all analyses as a fixed effect to account for other time varying factors.

We used the Supplementary Homicide Reports from the Federal Bureau of Investigation’s Uniform Crime Reporting System (1998-2015) to obtain counts of mass shootings by state.28 We compiled these data in line with the most commonly used definition of a mass shooting: one event in which four or more individuals were killed by a perpetrator using a firearm and the perpetrator themselves did not count toward the total number of victims.2930 These mass shooting events were analyzed in total and stratified as to whether the mass shooting was domestic or non-domestic in nature. Domestic mass shootings included instances where the perpetrator committed the act against an immediate family member or partner. Non-domestic mass shootings included all other types of relationships, such as acquaintances, employees, employers, friends, neighbors, strangers, extended family members, and others. Florida was excluded due to non-participation in the Uniform Crime Reporting System program.31

Data were analyzed by using generalized estimating equations with a negative binomial distribution and natural log link to determine the association between state gun laws and annual mass shootings. We chose this regression specification because of estimated variances exceeding conditional means. Repeated cross-sectional time-series measures were calculated as state-per-year. We used an offset of state population and, in the fully adjusted model, median household income, percent high school graduation, percent female headed households, percent in poverty, percent unemployment, incarceration rate, and percent white were included as covariates. These variables were chosen according to suggestions in the Supplementary Homicide Reports documentation,28 as well as other studies that examined state laws with different firearm outcomes.67891032 We included year as an indicator variable in all analyses. A compound symmetry working correlation structure was assumed due to its best fit of the data as shown by consistently lowest quasi-likelihood under the independence model criterion among the datasets.

Fully adjusted models included all covariates and an indicator variable for year. Partially adjusted models were calculated by including confounders that changed the association between the restrictiveness-permissiveness score and the rate of mass shootings by more than 10%, a common method for confounder selection.3334 Partially adjusted models also included an indicator variable for year and avoided inclusion of less influential covariates that added limited information to our models. Restrictiveness-permissiveness score and incarceration rate were lagged by one year to account for reverse causation. Because restrictiveness-permissiveness of state gun laws and state gun ownership were highly and significantly correlated (Pearson’s r 0.79, P<0.001) and interdependent, we did not include them in the same regression models.

Neither patients nor the public were involved in the planning or execution of this study.

The average restrictiveness-permissiveness score of state gun laws showed an overall shift toward permissiveness from 1998-2014; for each additional year that passed, scores on average became more permissive by 0.16 units (P=0.005). From 1998-2014, there were 344 mass shootings incidents as reported by the Uniform Crime Reports. A total of 263 (76.5%) of these events were classified as non-domestic events, the remaining 81 (23.5%) were classified as domestic. The variability of restrictiveness-permissiveness scores over the study period was limited in most states. Massachusetts was found to have the most restrictive and Vermont the most permissive state gun laws over the study period (see supplementary fig 1). 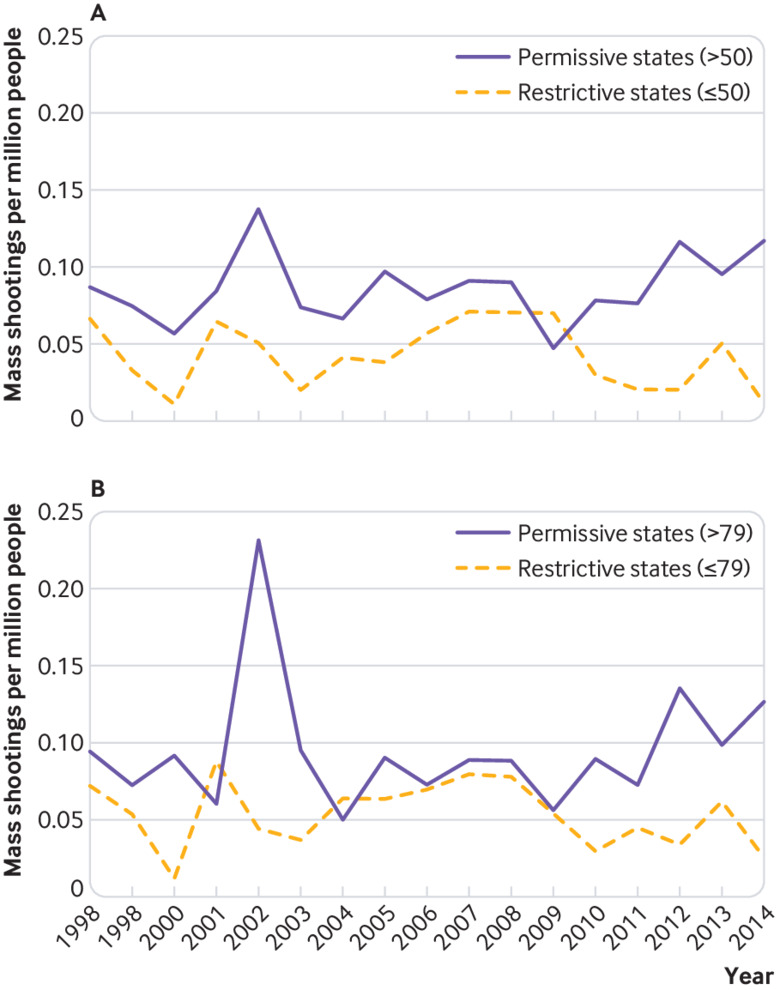 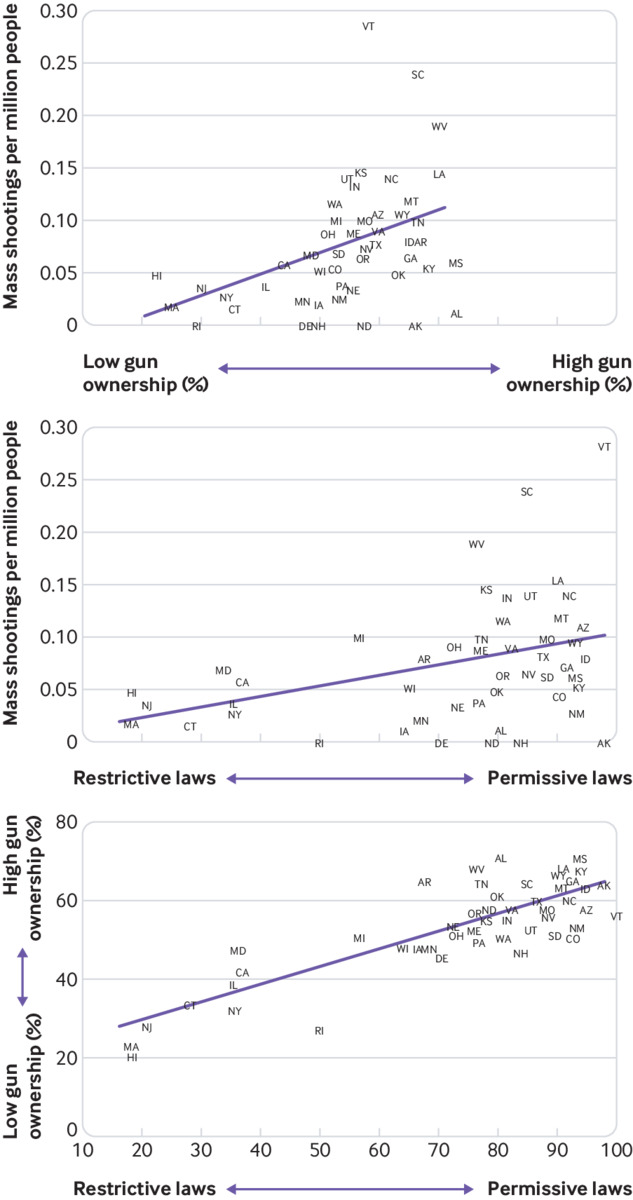 In partially adjusted models, an indicator variable for year was included in all analyses, in addition to only covariates that changed the relation between the exposures of interest (restrictiveness-permissiveness and gun ownership) and mass shootings by greater than 10%. For state gun law restrictiveness-permissiveness, only median income fulfilled this criterion. For state gun ownership, no covariate changed the relation by even 5% so only year was included. Table 1 shows that a 10 unit increase in state permissiveness was associated with a significant 9.2% (95% confidence interval 1.7% to 17.2%, P=0.01) higher rate of mass shootings. A 10% higher state firearm ownership rate was associated with a significant 36.1% (20.1% to 54.2%, P<0.001) higher rate of mass shootings.

These associations between state gun laws, gun ownership, and mass shootings are analogous to what was found in previous research for other types of gun injuries.678910 To develop effective state gun laws, the underlying cause of the association with rates of mass shootings needs to be identified. Perhaps as a result of outside pressures, relatively few specific gun laws have been scientifically studied, much less proven effective, for gun violence outcomes in general, and mass shootings in particular.235 Domestic violence and suicide are commonly connected to mass shooting events, so state gun laws involving restraining orders and extreme risk protection orders may be valuable first opportunities for scientific evaluation.3637 Non-legislative approaches, such as environmental modifications, policing practices, and bystander training, could also be worthy of evaluation in potentially preventing and reducing the tragic impacts of mass shootings.38394041 As with other large-scale, population-wide solutions to relatively infrequent mass health threats, both legislative and non-legislative approaches should be carefully studied for their potential beneficial effects as well as any unintended consequences that could emerge. This caveat is applicable here given the low rate of mass shootings compared with daily shooting events, although certain solutions could benefit both events.4243444546

There are several limitations to our study. Our study design incorporated a time series component, lagged variables, and multiple covariate adjustment strategies, and was primarily able to show broad associations between state gun laws, gun ownership, and mass shootings. The potential for omitted variable biases and reverse causation remain and future analyses are encouraged to build on our work by testing the before-and-after effects of enactment or repeal of gun laws in specific states, or both, alongside appropriately matched control states.

In addition, the state restrictiveness-permissiveness score we used has not been validated. However, this score had a wide range (0-100), was determined by legal professionals for use by actual gun owners, had nearly two decades of consistent data, and was highly correlated with other similar state-level scales that had been previously used (r=0.85).6 State gun laws and the enforcement of these laws can be difficult to separate and our measure of state gun laws might not reflect differing levels of enforcement among states with comparable restrictiveness-permissiveness scores.

There are concerns about potential under-reporting in the Uniform Crime Reporting System Supplemental Homicide reports due to some states failing to consistently report. However, these under-reported data would likely bias our results toward the null. If errors were randomly distributed, then there would be non-differential misclassification, leading to an underestimate of our association. Alternatively, if there is differential misclassification, evidence points to it being among more permissive states (such as Alabama, Nebraska, and Florida) most likely leading to, if anything, underestimation in the associations we found. Despite this, improved reporting systems for mass shootings, including better tracking of whether mass shooters legally possessed their firearms or crossed state lines to obtain their weapons, or both,4748 are needed to further improve the accuracy and detail of future analyses. 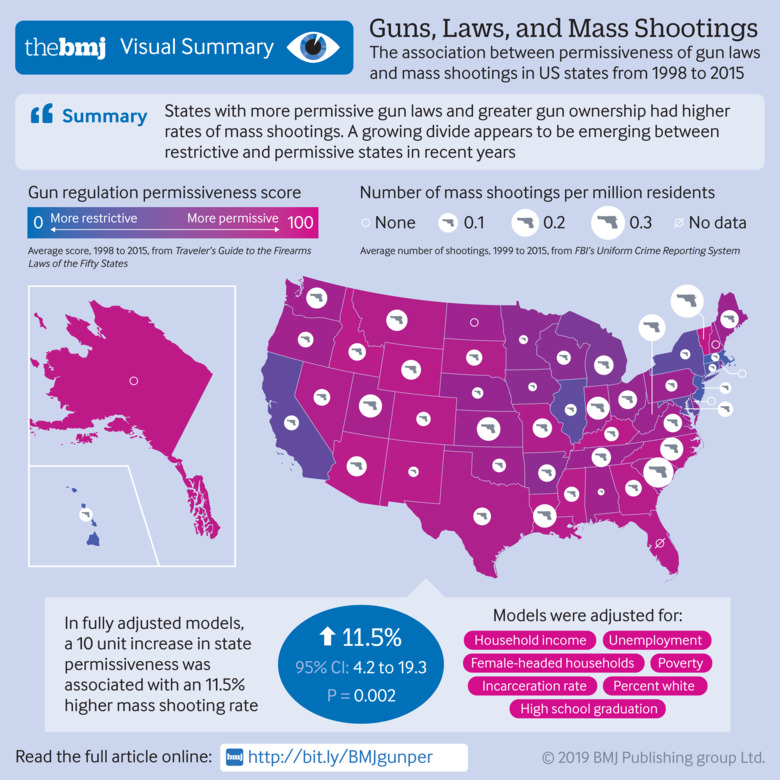