Malnutrition and unhealthy diets are important risk factors for non-communicable diseases. Francesco Branca and colleagues call for changes in both what and how food is produced, marketed, and consumed

Cardiovascular and respiratory diseases, cancers, and diabetes are responsible for 71% of global deaths (41 million) each year.1 Around 85% of premature deaths from non-communicable diseases (NCDs) now occur in low and middle income countries,2 where people also bear the greater burden of undernutrition and infectious disease.1 In wealthier countries, NCDs disproportionately affect vulnerable and disadvantaged groups.2

Malnutrition is a key risk factor for NCDs.3 Globally, nearly one in three people has at least one form of malnutrition,4 and this will reach one in two by 2025, based on current trends.5 Malnutrition includes nutritional disorders caused by deficient intake of energy or nutrients, such as stunting, wasting, and micronutrient deficiencies. It also includes excessive and imbalanced intake, leading to overweight, obesity, and diet related NCDs. Both categories of malnutrition are caused by unhealthy, poor quality diets, and they can be linked. Undernutrition in childhood, in addition to affecting survival, growth, development, health, and educational or economic outcomes, is a risk factor for overweight and NCDs in later life.6 Around 151 million children whose stunted growth is caused by undernutrition and 38 million children under five who are currently overweight are at increased risk of NCDs in adulthood.4

How unhealthy diets and food systems relate to NCDs

Unhealthy diets, malnutrition, and NCDs are closely linked. They are the logical consequences of, among other factors, today’s food systems, which have changed dramatically in the past 50 years. A focus on efficiency has seen an increase in the availability of inexpensive, high calorie foods, often from staple cereal crops, which has reduced hunger for many. This has, however, often been at the expense of diversity and has displaced local, often healthier, diets. Access to diverse, micronutrient rich foods—such as fresh fruits, vegetables, legumes, pulses, and nuts—has not improved equally for everyone, and unhealthy foods with salt, sugars, saturated fats, and trans fats have become cheaper and more widely available.3 Furthermore, global demand for and supply of meat, dairy products, sugar sweetened drinks, and processed and ultra-processed foods has increased dramatically.3

A variety of drivers and policies (or the lack thereof) shape food systems (fig 1). Food systems worldwide face major challenges, such as population growth, globalisation, urbanisation, and climate change. Agricultural, economic, trade, environmental, and international development policies create incentives, and disincentives, for the production of particular types of food. Rural development, urban planning, and transport policies affect what food reaches which consumers and at what price. Many factors influence consumers’ dietary behaviours, from personal—such as culture, knowledge, skills, dietary preferences, and time for food preparation—to economic and political—such as the cost or availability of food. Information about food, whether through education or marketing, also influences choices. Marketing, labelling, and policies that impact on price all affect consumer demand. Economic and social protection policies determine whether vulnerable populations can access healthy and sustainable diets. The nutritional quality of the foods available in the places we live affects the health of people and the planet.

Food systems and how they affect diet and nutrition. A food system is defined by the High Level Panel of Experts on Food Security and Nutrition of the Committee on World Food Security as including “all the elements (environment, people, inputs, processes, infrastructure, institutions) and activities that relate to the pre-production, production, processing, distribution, preparation, and consumption of food and the outputs of these activities, including socioeconomic and environmental outcomes.” Food systems are influenced by sociocultural, economic, political, and environmental contexts. There are many different types of food systems—from long chain, high value, and industrial to short chain, low value, traditional, and rural—and different systems may exist within a country at the same time. The food environment can be defined as “the interface that mediates people’s food acquisition and consumption within the wider food system. It encompasses external dimensions such as the availability, prices, vendor and product properties, and promotional information and personal dimensions such as the accessibility, affordability, convenience, and desirability of food sources and products.”7

Today’s food systems are broken and do not deliver nutritious, safe, affordable, and sustainable diets; worse, they undermine nutrition in several ways, particularly for vulnerable and marginalised populations. Good nutrition—particularly in the 1000 days from conception to a child’s second birthday—is critical, but aggressive marketing of formula and baby foods compromise breastfeeding ­and feeding practices in early childhood. Diets lacking a range of nutrient rich foods are a major cause of stunting: two thirds of the world’s children are not eating the recommended minimum number of food groups and only one in six children is receiving a minimum acceptable diet.8 Billions of dollars are spent annually marketing foods high in calories, fats, sugars, and salt, and intake has increased globally, including in low income countries. Meanwhile, more than a quarter (27.5%) of the world’s population are now insufficiently physically active.9 The prevalence of adult obesity has nearly tripled since 1975 and, by 2016, more than 1.9 billion adults were overweight or obese,10 while there has been a ten fold increase in overweight and obesity among children and adolescents over the same period.11 In 2014, 422 million people were affected by diabetes, up from 108 million in 1980.12

The burden and true costs of malnutrition and diet related NCDs

Maternal and child malnutrition and poor diets are the two major risk factors for disease burden—as measured by disability adjusted life years (DALYs)—worldwide, according to the 2017 Global Burden of Disease data (fig 2).13 Poor diet, as defined by a cluster of dietary risks, is the leading cause of death (fig 3) and is the first or second biggest contributor to NCD disease burden in all six World Health Organization regions.13 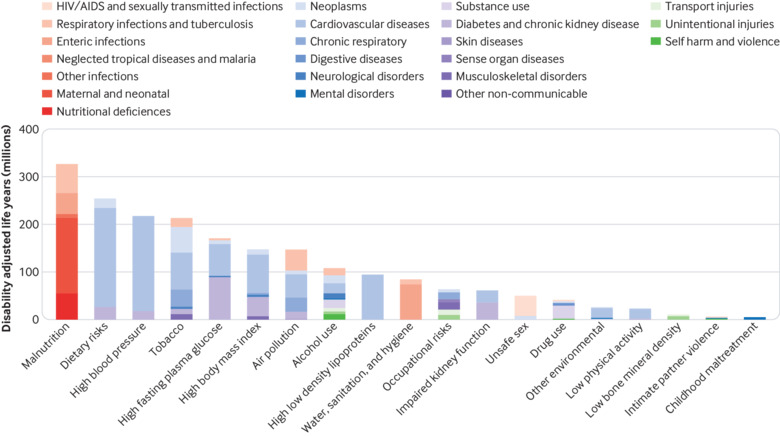 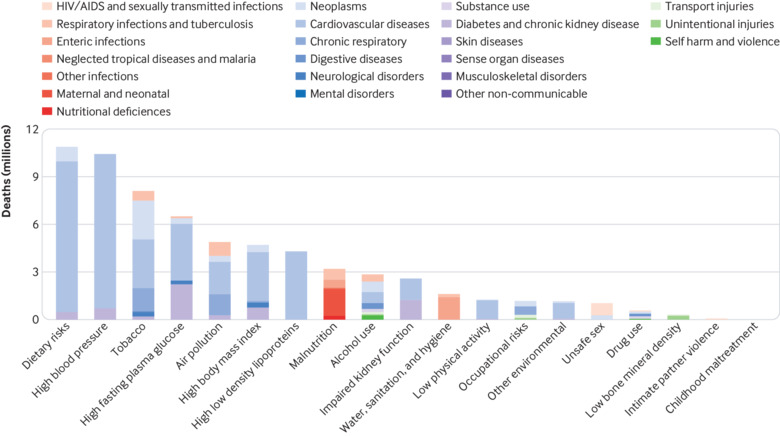 Of these dietary risks, the biggest contributors to the global burden of disease in 2017 were diets that are low in whole grains, high in sodium, or low in fruits, nuts and seeds, or vegetables (fig 4). Additionally, there is an effect of higher body mass index on disease outcomes.13 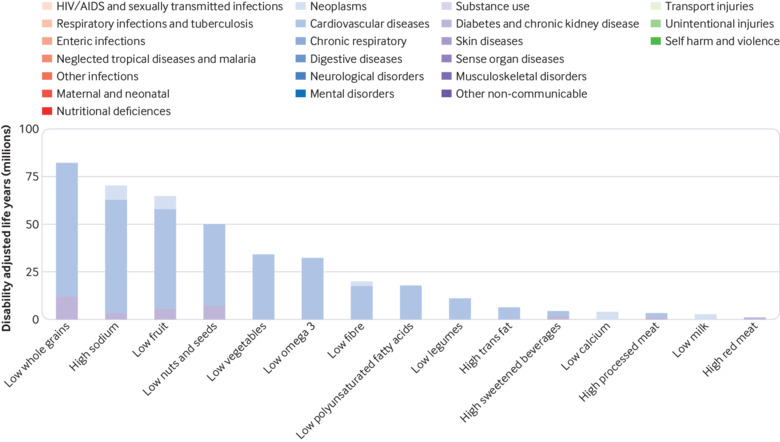 As well as human loss and suffering, malnutrition and diet related NCDs pose a substantial economic burden (fig 5). Countries face the implications of a workforce that never reaches its full productive potential, as well as the costs of treating and managing long term NCDs. Families are affected when wage earners cannot work or healthcare costs push households into poverty. 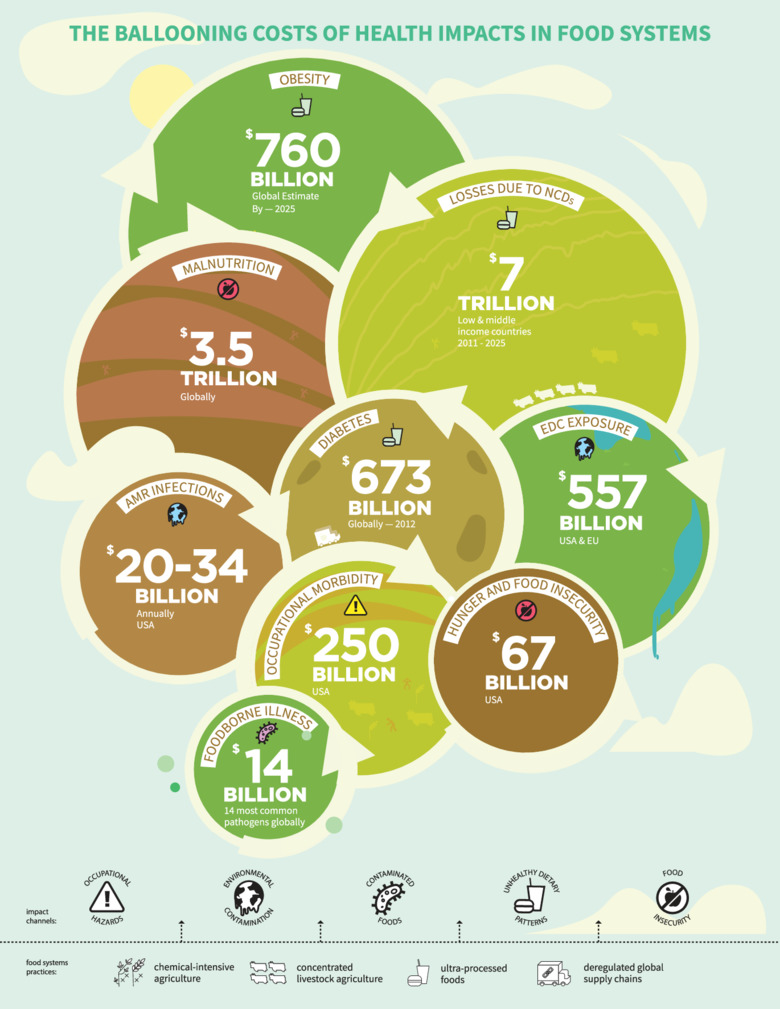 The ballooning costs of health impacts in food systems. Recent estimates of the costs of impacts associated with food systems14 IPES-Food. Unravelling the food-health nexus: addressing practices, political economy, and power relations to build healthier food systems. Global Alliance for the Future of Food and IPES-Food, 2017

Yet, even the numbers in figure 5 do not represent the true costs of modern food systems, whose heavy environmental impact threatens the health of the planet and future generations. Global food production, responsible for up to a third of greenhouse gas emissions, is a major source of soil, air, and water pollution, while accounting for more than 70% of freshwater use and 40% of land use, and contributing to biodiversity loss.1516 These effects could rise by 50-90% by 2050 unless food systems are transformed.17 The type of food produced is also important—the impact of ruminant meat production is around 100 times those of plant based foods.15

Real progress to prevent diet related NCDs across the life cycle requires radical food systems transformation so that nutritious, safe, affordable, and sustainable diets are available to all.

Food systems and the infrastructure on which they depend must be restructured. Reforms to the supply side of food systems in order to improve the availability of healthy sustainable diets are needed—from research and production through to processing, storage, transportation, marketing, and retailing.

Investment must be made in green transport, storage, and distribution infrastructure to give access to perishable, nutrient rich foods, such as fruits and vegetables. Measures that affect demand for certain foods—what we buy, how we prepare it, and what we eat or throw away—are urgently needed. These should include actions to create healthy food environments, supported by nutrition education, especially in schools,1819 to ensure that even the most vulnerable people can access healthy diets. Taxes and subsidies—along with regulatory measures on food composition, marketing, labelling, and nutrition standards for food in schools and other public institutions—are among the tools available.

Although it is increasingly clear what needs to be done, less than a third of countries have fully implemented measures recommended by WHO—such as restricting marketing of unhealthy foods to children, taxing sugar sweetened drinks, or banning industrial trans fats (see box). Commercial interests, including the agri-food and drink industries, have large budgets to use on a variety of tactics—from lobbying decision makers to stirring public resistance—to undermine public health policy.20 Mechanisms are needed to protect governments against vested interests and ensure partnerships are in the interest of public health.

The challenges of achieving policy coherence and implementing multisectoral action across governments—in the face of competing priorities and budgetary constraints, short term political gain, and lack of accountability—should also be acknowledged, along with the challenges of collecting reliable data to inform policy and report on progress, or its lack. The role of activists in advocating for strong nutrition action, building public support, and holding government to account on their commitments is vital.

To accelerate progress, the United Nations Decade of Action on Nutrition (2016-2025), along with the 2030 Sustainable Development Agenda and Goals, and the Paris Agreement, present an unprecedented opportunity to transform food systems, eliminate malnutrition in all its forms, prevent diet related NCDs, and realise the human rights to food and health.2122

While most countries report having dietary guidelines, labelling legislation, media campaigns promoting healthy diets, or nutrition counselling through primary healthcare,23 they could do more to create healthy food environments.

Structural actions to improve the food environment include—among others—implementing a ban on industrially produced trans fats; effective restrictions on marketing of unhealthy foods and beverages to children; ending inappropriate promotion (to parents) of foods for infants and young children; taxing sugar sweetened beverages or unhealthy foods; mandating simplified, interpretive front-of-pack nutrition labelling; and introducing nutrition standards for food served or sold in schools, hospitals, and other public institutions. These types of action are much less common—not one of the examples given has been implemented in more than a third of countries.23242526

We thank Karen McColl, Lina Mahy, and Jørgen Torgerstuen Johnsen for their contribution to this paper.