Neonatal sepsis, a systemic infection in the first 28 days of life, encompasses bloodstream infections, meningitis, and pneumonia. It is the third most common cause of deaths among neonates, accounting for 225 000 deaths globally every year.1

South Asia and sub-Saharan Africa have the highest burden of neonatal sepsis in the world. Of the total sepsis related neonatal deaths in 2013, 38.9% occurred in South Asia.12 Poverty, low coverage of effective interventions, including facility births, and gross inequities in delivery of healthcare3 contribute to this situation. We review the available literature (box 1) to draw attention to the burden of neonatal sepsis, the pathogen profile, and the extent of antimicrobial resistance in South Asia, and propose priority actions for policymakers and health professionals in the region.

We searched PubMed and Web of Science for literature published between January 2000 and August 2018 using the search terms: (newborn OR neonate) AND (sepsis OR infection OR antibiotic OR antimicrobial). The results were filtered for South Asian countries. Bibliographies of full text articles and published systematic reviews were also searched to identify additional articles.

We identified 2699 and 220 articles from PubMed and Web of Science, respectively, and 19 additional articles from reference lists of identified articles. After removing duplicates, we screened 2768 articles and reviewed 223 full text articles. Finally, 109 studies were included: 69 from India, 16 from Pakistan, 7 from Bangladesh, 14 from Nepal, 1 from Sri Lanka, and 2 multi-country studies (Young Infant Study4 and Aetiology of Neonatal Infections in South Asia (ANISA)5) covering Bangladesh, India, and Pakistan). Because the datasets belonging to different time periods and/or different patient populations in a given study were considered unique, we had a total of 123 datasets from 109 studies.

Two authors (SS and SC) extracted information from the relevant studies. Most studies were hospital based, single centre studies that reported data on neonates with suspected sepsis or laboratory based studies reporting bacteriological profile and antimicrobial resistance of cultures received from neonatal intensive care units. We identified only eight relevant community based studies. Random effects meta-analysis was done to pool the results, if applicable, using the “metan” command in Stata 15.1 (StataCorp, College Station, TX). Pooling of rates was done separately for the hospital based and community based studies. See appendix on bmj.com for details of the methods and studies included.

We found no data on neonatal sepsis from Afghanistan, Bhutan, Maldives, and little from Sri Lanka. While the neonatal health indicators of three of these four countries are reasonably good,3 the paucity of data from war torn Afghanistan is a cause for concern.

More importantly, the data from the four countries with the highest burden of neonatal sepsis (India, Pakistan, Nepal, and Bangladesh) are of poor quality. With the exception of studies such as the Young Infant Study,4 ANISA,5 and the multisite study from the Delhi Neonatal Infections Study7 collaboration, most studies are retrospective, lack rigorous methods and standard definitions, and have used passive surveillance to identify cases. There is therefore an inherent risk of underestimating the burden of sepsis in the region.

The pooled incidence of culture positive sepsis in hospital based reports from South Asia is 15.8 per 1000 live births (95% CI 12.7 to 18.8, n=15 reports). This is about twofold to fourfold higher than that reported in high income countries such as England and the United States.89 The incidence does not seem to have declined in the last decade.10 About a third of neonates with culture positive sepsis died as a result (median case fatality rate 34.4%). Table 1 presents incidence and case fatality rates by country.

Neonatal sepsis is classified as culture positive or culture negative, depending on isolation of pathogen(s) from blood or other sterile fluids. Based on the available data, this review focuses on the burden of culture positive sepsis, which forms only part of the total number of sepsis cases. Because of the difficulty in obtaining an adequate volume of blood in preterm neonates and the low levels of bacteraemia, blood cultures tend to be sterile in many neonates. The culture positive versus culture negative sepsis ratio ranges from 1:6 to 1:16 in high income countries.11 The ratio is likely to be more skewed towards culture negative sepsis in South Asia, given the poor microbiological laboratory support in most units. The burden of total neonatal sepsis is therefore likely to be much higher.

The proportion of neonates with culture positive sepsis in community based studies was lower—12.3 per 1000 live births (95% CI 8.4 to 16.2). However, this was influenced by the ANISA study,5 which used a statistical model incorporating the results of molecular assays to estimate the incidence of bacterial sepsis. If only conventional blood culture positive results are included, the pooled risk of sepsis was much lower—5.5 per 1000 live births (95% CI 2.4 to 8.6).

The predominance of Gram negative pathogens in South Asia suggests that the transition from Gram negative pathogens to Gram positive organisms such as group B streptococci that happened five to six decades ago in developed countries10—largely because of improved aseptic routines, including hand hygiene in neonatal intensive care units—is yet to take place in South Asia.

The common pathogens from hospital based studies uniformly exhibit a high degree of resistance to first line drugs recommended by the World Health Organization—namely, ampicillin, gentamicin, and third generation cephalosporins such as cefotaxime (table 2).6 However, most were susceptible to WHO classified “watch group”6 antibiotics, such as meropenem (see suppl table 1 on bmj.com). About half (pooled proportion 46.5%; 95% CI 41.9 to 51.1) of S aureus isolates were meticillin resistant, but most remained susceptible to watch group antibiotics such as vancomycin. The varied pathogens with high resistance patterns preclude the use of intrapartum antibiotic prophylaxis to prevent vertically transmitted infection. In contrast, the antimicrobial resistance profile in the community based studies was not so high: although resistance to ampicillin was high, resistance to gentamicin and third generation cephalosporins was low.

If the apparent dichotomy in antimicrobial resistance between the hospital based and community based studies is real, health facilities in the region should review their antibiotic policy to prevent misuse of antibiotics. The high antimicrobial resistance brings into focus the overuse of antibiotics in neonates with culture negative sepsis. The ANISA study showed that many neonates with negative blood cultures had viral infections.5 The low case fatality in neonates with culture negative sepsis (only one fifth of that of culture positive sepsis) in the multisite study from Delhi7 also suggests that many of these neonates either had viral infections or did not have sepsis at all. More reliable and accurate point-of-care diagnostic method(s) are needed to rule out sepsis, thereby preventing indiscriminate use of antibiotics in neonatal intensive care units.

Quality of care and antimicrobial stewardship in hospitals

Most health facilities in the region continue to be the “hot beds” of infection transmission in sick and vulnerable neonates.10 Lack of essential equipment and supplies including soap, sinks, running water, and disposables; overcrowding and understaffing; and suboptimal disinfection practices increase the risk of horizontal transmission of infections from the labour rooms or neonatal intensive care unit.10 The twofold greater risk of sepsis in hospital based studies compared with community based studies suggests that horizontal transmission—that is, healthcare associated infections—plays a major part in the high incidence of neonatal sepsis in the region. Selective referral of high risk neonates to hospitals may also account for this. With increasing rates of facility births, the burden of neonatal sepsis is bound to increase unless radical measures to improve the quality of care are implemented.

Antimicrobial stewardship programmes must be implemented to rationalise antibiotic use. Policy makers and other stakeholders should develop guidelines and toolkits to facilitate implementation of these programmes across health facilities at different levels of the health system. Steps should be simplified and continuous monitoring and auditing done to inform healthcare providers of the progress made. Figure 1 depicts a simplified model of antimicrobial stewardship programmes for use in health facilities in the region.121314 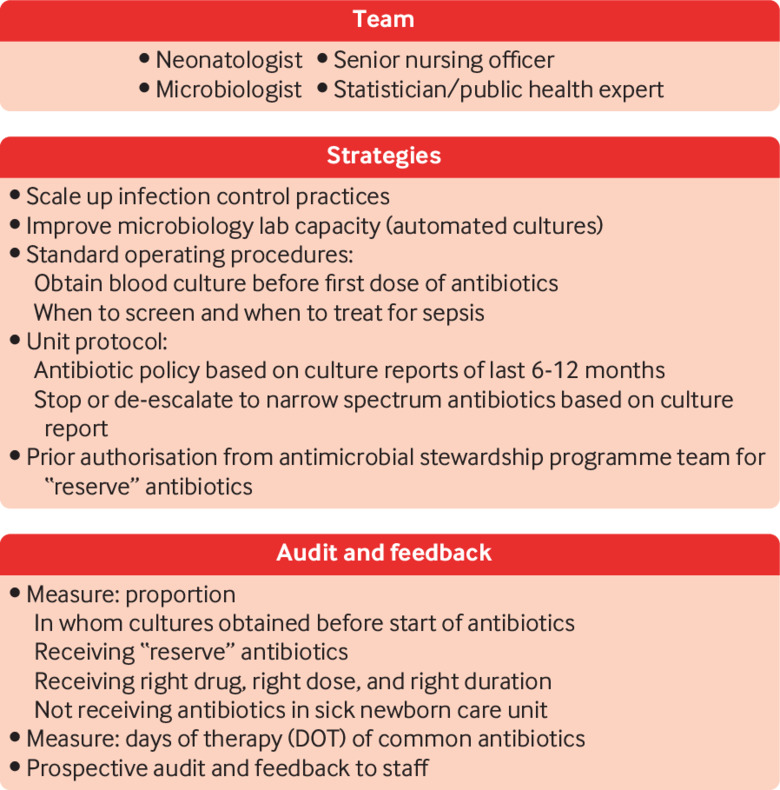 The Every Newborn series on quality of care at birth identified that scaling up of evidence based interventions could reduce infection related neonatal deaths by 84% globally.17 This is likely to have a major impact in South Asian countries3 because the existing coverage of these interventions in almost all countries is low, except in Maldives and Sri Lanka. For example, the proportion of pregnant women receiving at least four antenatal visits in Afghanistan (18%), Bangladesh (31%), India (51%), Nepal (69%), and Pakistan (37%) is low. The proportion of births attended by skilled health workers is 51%, 42%, 81%, 58%, and 55%, respectively.18 The median coverage of clean birth practices is 33.9%,3 and of the first postnatal check-up in the first two days of birth is 31% in all countries except Maldives and Sri Lanka.18Figure 2 lists key interventions that could reduce the high burden of sepsis, sepsis related mortality, and antimicrobial resistance. 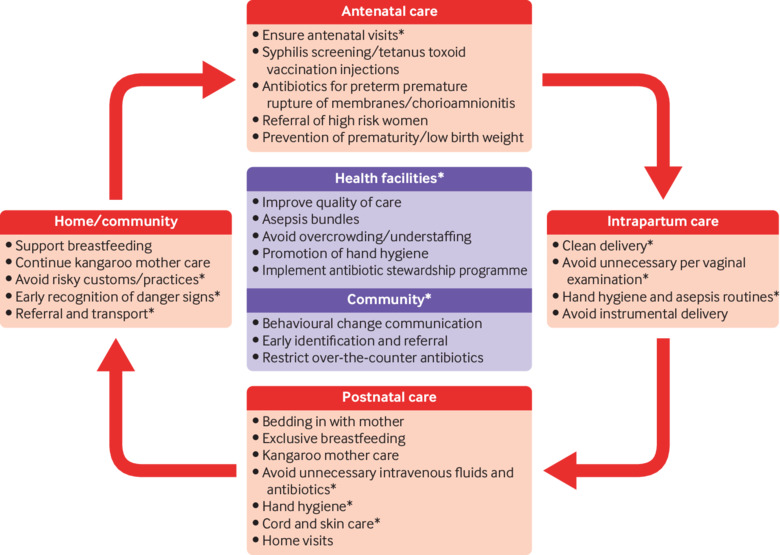 Key interventions to reduce the burden of sepsis and antimicrobial resistance in South Asia. *Indicates interventions that are more relevant to the region

Concerted efforts at national and regional levels to identify health system related issues resulting in high incidence of sepsis and antimicrobial resistance, to improve the coverage of known interventions, and to implement context specific solutions that are simple and effective, along with a strong political will, will go a long way to reduce the burden of sepsis related mortality and morbidity in the region.