Eliminating visceral leishmaniasis in South Asia: the road ahead

Devastating epidemics of visceral leishmaniasis, also known as kala-azar, have been recorded on the Indian subcontinent since the early 19th century,1 most commonly affecting poor people.2 The three most affected countries in South Asia are India, Bangladesh, and Nepal. Sporadic cases have been reported in Bhutan and Sri Lanka. Box 1 describes key features of kala-azar in South Asia. Efforts to control the disease have had limited impact.3 Until recently, these countries accounted for more than 50% of the global disease burden.4 Sustained elimination efforts have led to a steady decline in recent years. However, some transmission continues and outbreaks in non-immune populations remain likely. As the number of kala-azar cases becomes negligible, newer tools and strategies will be required for diagnosis, treatment, and vector control.

Key features of kala-azar in Bangladesh, India, and Nepal

In 2005, the governments of three endemic countries in South Asia—Bangladesh, India, and Nepal—jointly established a regional alliance to eliminate kala-azar, supported by the World Health Organization.56 The kala-azar elimination programme is the only regional collaboration globally to tackle this disease. It set a target to decrease the incidence of kala-azar to a level at which it was no longer a public health problem by 2015. That deadline has now been extended to 2020.7 The development of the oral drug miltefosine8 and a rapid diagnostic test based on the rK39 antigen9 have had a critical role in early diagnosis and providing effective treatment to reduce the disease burden. Additionally, the programme has focused on vector control and improved surveillance to reduce transmission and improve case detection. Figure 1 depicts the strategy with the key outcomes in this initiative to achieve the target of less than one per 10 000 population. 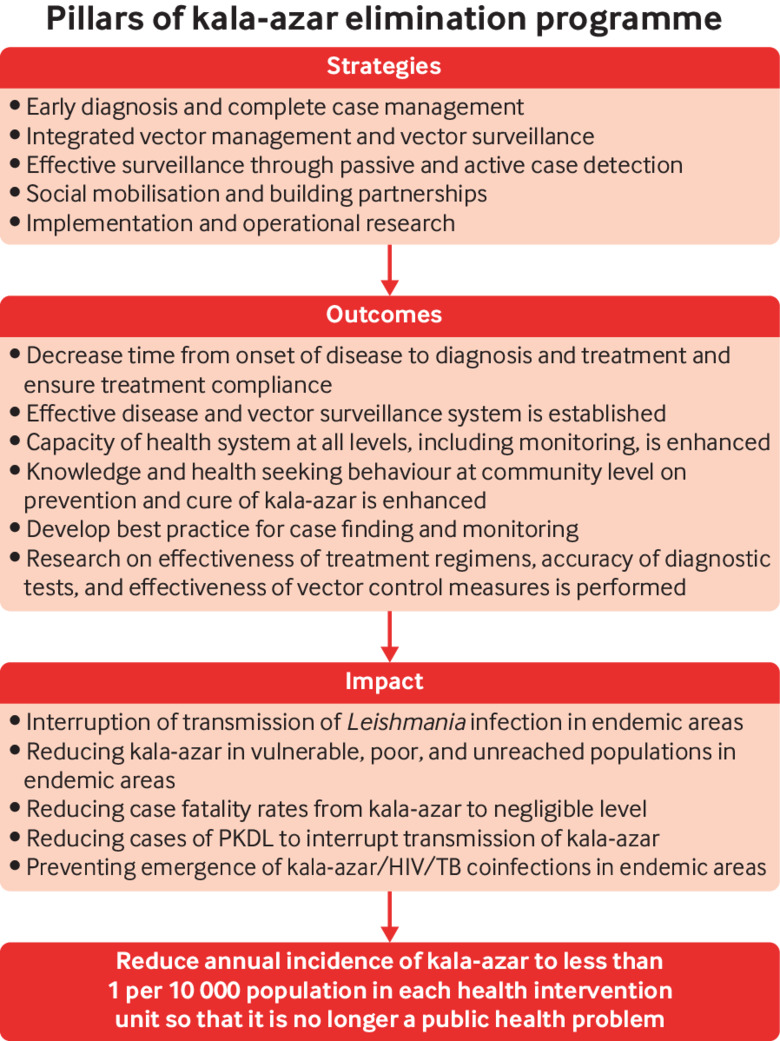 Strategy for the kala-azar elimination programme in India, Nepal, and Bangladesh (adapted from WHO regional strategic framework for elimination of kala-azar42). PKDL=post-kala-azar dermal leishmaniasis

The impact of the kala-azar elimination programme has not been systematically evaluated, but it is likely that sustained focus and collaborative efforts through the programme have contributed to the declining incidence. Moreover, the level of reporting has improved, providing a more accurate estimate of the disease burden. Possibly, the free treatment offered by public health services under the programme has led to better notification of the disease. In India, for example, under-reporting declined to a factor of 1.2 in 2015 from a factor of three to eight observed in 2003 and 2005.13141516

Caution is needed as a resurgence of kala-azar is possible. The programme did not target “elimination of the pathogen” and thus some transmission continues. Figure 2 shows that the number of cases in India seems to follow roughly 15 year cycles. This makes it difficult to assess the effect of interventions to control the disease, as the downward trend may be the result of the “natural” fluctuation of the disease.17 Communities that had some herd immunity in the past may gradually be becoming fully susceptible.18 The rising trend in post-kala-azar dermal leishmaniasis19 together with the emergence of coinfection with HIV is concerning.20 Patients with these conditions may serve as reservoirs of infection, perpetuating transmission even when the elimination targets are reached.2021 Treatments for both conditions are far from ideal.1920

In the post-elimination phase, surveillance needs to be maintained while detection and control strategies will need to be modified.

The current rapid diagnostic test detects antibodies against rK39 antigen. To confirm diagnosis and start treatment a positive result must be interpreted in conjunction with clinical features—that is, fever for two weeks and a palpable spleen. On its own, the test is not specific for the acute stage of the disease, and is also positive in latent carriers and in cured patients. The combination with a clinical case definition induces a delay of two weeks before the patient is diagnosed. Decreasing the time between onset of symptoms and diagnosis might help reduce transmission.22

The kala-azar elimination programme has benefited greatly from this diagnostic test for detection of cases. However, the test may become inadequate in the post-elimination phase as its positive predictive value may decrease rapidly when near elimination is achieved. Many patients with a false positive result risk being given treatment for kala-azar while the actual cause of their persistent fever (brucellosis, rickettsiosis, tuberculosis, etc) is not dealt with. A more specific test will be required, preferably based on antigen detection.2324Table 1 lists some diagnostics test under development that might overcome the limitations of the current test and be more appropriate in the post-elimination era.

The current drug regimens, while allowing progress towards eliminating kala-azar, will probably be inadequate for the post-elimination phase.25 Based on WHO recommendations, the kala-azar elimination programme replaced miltefosine with a single dose infusion of liposomal amphotericin B (AmBisome) as first line treatment in 2013. AmBisome has shown greater efficacy and improved compliance, but it requires a strict cold chain. AmBisome has been used successfully in the attack phase of the programme in India. However, the entire programme (ie, primary kala-azar, relapses, post-kala-azar dermal leishmaniasis, and HIV-kala-azar cases) is now reliant on a single medicine produced by a single manufacturer. Relapses have been observed with this treatment.25

Paromomycin-miltefosine combination therapy is recommended as an alternative where a cold chain cannot be ensured. This regimen includes 10 days of injections with paromomycin. Miltefosine is potentially teratogenic, which limits its use in women. Current trials in India and Bangladesh (CTRI/2017/04/008421, CTRI/2015/05/005807) aim to evaluate the efficacy of different regimens of the AmBisome-miltefosine combination to reduce treatment duration, relapses, and toxicity in patients with post-kala-azar dermal leishmaniasis and HIV coinfection.

Most of these trials are using repurposed drugs developed for other indications and not according to a target product profile reflecting the requirements of a sustainable elimination programme. Ideally, a new drug should be able to be taken orally and combine high efficacy with an excellent safety profile for deployment in remote areas with poor health infrastructures. Half of all patients are children, so drug development should take this into account. An optimal drug combination would have a short (<10 days) treatment duration, different mechanisms of action to offer protection from resistance, a good safety profile, and no interaction with other drugs commonly used in these areas, such as antimalarials.

Several pharmaceutical research groups have invested heavily in discovering a drug targeting Leishmania parasites. Six new chemically diverse drugs, targeting five different molecular mechanisms, are in the late stages of development (table 2). All of these are oral drugs and reduce the parasite load by >95% in animal models of kala-azar when given for up to 10 days.25 Given the typical attrition rates in the drug discovery process, one or two compounds could be registered by 2025, providing a completely different treatment for the post-elimination phase. Strategies must be developed to ensure compliance with these new treatments, similar to the directly observed treatment short course used for tuberculosis, to prevent emergence of resistance. Monitoring the safety and effectiveness of these treatments and emergence of drug resistance will be required.

Measures to control vectors have primarily been indoor residual spraying of insecticides in endemic villages reporting kala-azar cases in the preceding three years. A toolkit for monitoring and evaluation of entomological interventions was developed within the kala-azar elimination programme.27 Pyrethroid spraying has been shown to be effective in reducing sand flies in carefully controlled experiments.28 However, field studies suggest that the level of vectors has not declined significantly in villages treated by indoor residual spraying.29 Spraying also requires a lot of equipment, is expensive, and is often not easily acceptable to communities, making it unsustainable in the long term.

In view of these drawbacks, researchers looked for alternatives that were cost effective, had a longer period of efficacy, and were easy to use and sustain. Trials in Bangladesh, India, and Nepal have shown reduction of sand fly density using reimpregnated commercial bed nets and longlasting insecticide treated bed nets.3031 However, they have not been shown to confer protection against visceral leishmaniasis in a cluster randomised trial in India and Nepal.32 A comparative study in endemic villages in Bangladesh showed a greater decrease in the incidence of visceral leishmaniasis in one area where people slept under bed nets impregnated with a slow release insecticide, KO Tab, compared with the control area.33 Durable wall lining has also shown promise in controlling sand fly density, although the initial cost is high.34 Other tools being evaluated include wall paint containing three insecticides, including a larvicide, and an insecticide repellent combination for canine leishmaniasis.35

We must complete our knowledge of vector bionomics and behaviour to allow for better designed and more effective tools for vector control.36

Epidemiological surveillance of kala-azar has improved considerably under the kala-azar elimination programme, and under-reporting is now minimal. As the incidence of the disease declines, awareness and knowledge of the disease will probably fall in both patients and clinicians. Active screening for case detection will stop. To be effective and sustainable in the post-elimination era, systems for case detection, notification, and surveillance will need to be redesigned.

People affected by kala-azar continue to present at a late stage to primary health centres, and diagnosis is often delayed.223738 Furthermore, these primary health centres are poorly resourced, making it difficult to provide good quality care. Kala-azar control programmes are largely organised vertically and are often disconnected from the reality in the field. At primary healthcare level, physicians, nurses, and other medical professionals deal with patients presenting with a wide spectrum of complaints.39 An integrated approach is required for the surveillance and management of fever at primary care level in kala-azar endemic settings to ensure that no cases are missed. A syndrome based approach to clinical management of fever must be adopted. This would include kala-azar as a differential diagnosis and allow systematic testing with a rapid diagnostic test for kala-azar and other conditions in patients with fever for more than two weeks.40 Cooperation with the private health sector will be crucial to ensure that all patients are reached.

New tools and strategies are required for epidemiological surveillance in the post-elimination phase. These include tools for detection of kala-azar and post-kala-azar dermal leishmaniasis when their incidence is very low, an adequate response strategy to an outbreak, and proxy markers for sand fly infectivity.11 Population based serosurveillance is a powerful tool to examine trends in infection rates and gauge the effect of the kala-azar elimination programme. Established health and demographic surveillance systems41 in the region can contribute by monitoring trends in kala-azar incidence and seroprevalence over a longer time.

Continued vigilance will be required to sustain the gains achieved through kala-azar elimination efforts. The programme will need to evolve and realign strategies to meet the requirements of this post-elimination phase. This will necessitate proportionate investments in research and development of new tools, training of health workers, and logistics and infrastructure to improve the quality of primary care. Commitment to eliminating the scourge of kala-azar from this region and globally must continue.

We thank Isra Cruz from the Foundation for Innovative New Diagnostics for reviewing the diagnostic table.