The recommendations in this clinical practice guideline are based on a linked systematic review1 triggered by a randomised controlled trial published in the New England Journal of Medicine in August 2018.2 This trial and the linked review found that dual antiplatelet therapy (DAPT) with clopidogrel and aspirin (acetylsalicylic acid) during the first 21 days after the index event reduced the risk of recurrent major ischaemic events compared with aspirin monotherapy.

This Rapid Recommendation aims to quickly and transparently translate evidence for working clinicians and their patients in adherence with standards for trustworthy guidelines and the GRADE system.345 A panel free of financial conflicts of interest, and including patients, drafted the recommendations. We have managed intellectual interests.

Box 1 shows all of the articles and evidence linked in this Rapid Recommendation package. The core infographic provides an overview of the absolute benefits and harms for DAPT compared with aspirin monotherapy.

Single antiplatelet therapy with aspirin or clopidogrel is an effective intervention for both short and long term secondary prevention of stroke and transient ischaemic attack after an index event. Clinicians sometimes use alternatives of cilostazole or a combination of dipyridamole and aspirin, both referred to for this recommendation as single agent therapy.6789

Aspirin and clopidogrel have synergistic action to inhibit platelet aggregation. So it is plausible that the two drugs together may provide better secondary prevention of stroke than one. However, they are not in widespread use for various reasons:

Table 1 outlines how international guidelines vary. A minority make a weak recommendation or suggestion for short term DAPT. It also shows some international variation in the single agents that are recommended in the long term. The NICE guideline favours clopidogrel over others, and combined aspirin and dipyridamole over aspirin, whereas most guidelines consider all three as equivalent options.

Current recommendations for antiplatelet therapy for secondary prevention of stroke

This guideline was triggered by a randomised controlled trial that compared dual antiplatelet therapy (DAPT, clopidogrel plus aspirin) with aspirin monotherapy given within 12-24 hours of symptom onset in patients with high-risk transient ischaemic attack or minor stroke.2 This added to a previous DAPT trial published in 2013.15 The Rapid Recommendations team thought that the results had the potential to change practice.

The scope of the recommendation and the patient-important outcomes were defined by an international guideline panel consisting of three patients with lived experience of stroke, one adult who cared for someone with a stroke, five stroke neurologists, one vascular surgeon, one health research methodologist, five general internists (four who are also methodologists), one nurse, one physiotherapist, and one critical care physician (who is also a methodologist) (see appendix 1 on bmj.com for details of panel members). The panel judged death, non-fatal stroke, major extracranial bleeding, functional ability, and quality of life as critical outcomes. Myocardial infarction, recurrent transient ischaemic attack, and minor extracranial bleeding were judged less important.

The panel requested a systematic review and meta-analysis of RCTs examining the benefits and harms of DAPT versus single agent antiplatelet in order to inform the recommendation. The panel then met online to discuss the evidence and to formulate recommendations. In our judgment no panel member had relevant financial conflicts of interest; intellectual and professional conflicts were minimised and transparently described (see appendix 1 on bmj.com).

The panel followed the BMJ Rapid Recommendations procedures for creating a trustworthy recommendation,2021 including using the GRADE approach to critically appraise the evidence and translate it to recommendations (see appendix 2 on bmj.com).4 The panel considered the benefits, harms and burdens of DAPT versus single antiplatelet therapy, the quality (certainty) of the evidence for each outcome, variations in patient values and preferences, as well as acceptability and feasibility.22 Following the GRADE based approach, recommendations can be strong or weak for or against a specific course of action.23 The recommendations take a patient-centred perspective that de-emphasises public health, societal, and health payer points of view. Healthcare systems can adapt these recommendations by including costs and other key issues of relevance, contextualised to national and local circumstances.

The linked systematic review1 found three RCTs examining DAPT versus aspirin alone reporting on a total of 10 447 patients.21516 Figure 2 provides an overview of the RCTs and RCT participants. Overall, patients included in these trials were similar to those seen in everyday practice. Mean age varied from 62 to 68.1 years. In the FASTER trial 1/6 of the patients were older than 81 years; in CHANCE 1/4 of patients were over 72; and in POINT 1/4 were over 85. Just over half of participants (52.8-66.2%) were male. 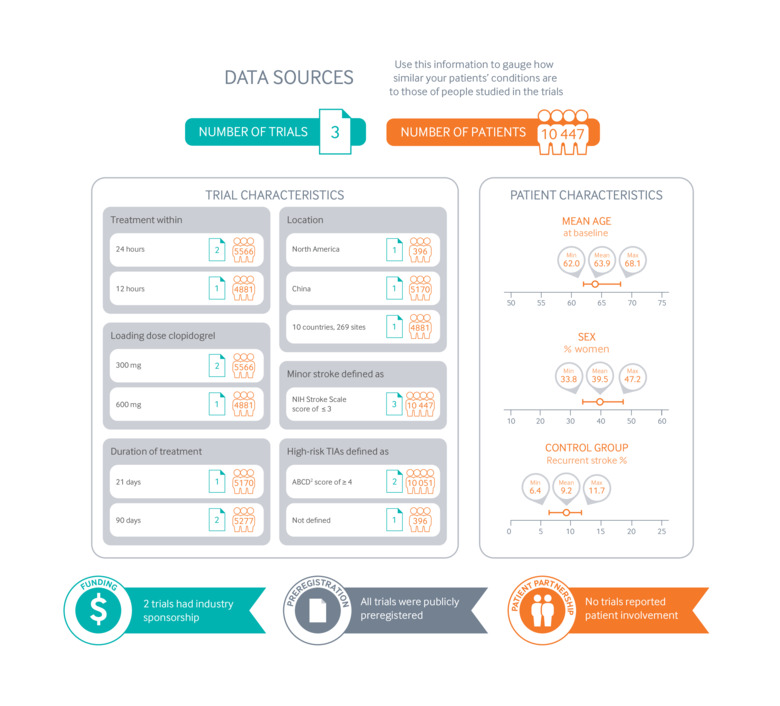 The RCTs varied from 396 participants to 5170; the two largest trials contributed 10 051 patients. One trial was conducted in China,15 one in North America,16 and one, the POINT trial,2 in 269 study sites from 10 countries worldwide. The POINT trial2 included a diverse population and may therefore be more generalisable than the CHANCE trial, which included only Chinese patients.15 All trials defined minor stroke as a National Institutes of Health Stroke Scale (NIHSS) score of ≤3 at the time of randomisation (scores range from 0 to 42, with higher scores indicating greater deficits). The two large trials defined high risk transient ischaemic attacks as an ABCD2 score of ≥4 (see box 2 for details) at the time of randomisation.17 In all trials, patients had undergone computed tomography (CT) scan or magnetic resonanceimaging (MRI) to exclude the presence of cerebral haemorrhage or alternative explanations for their symptoms. Enrolment had to take place within 12-24 hours of onset of symptoms.

The infographic provides an overview of the recommendation, the benefits and harms, and our certainty in the evidence. Estimates of baseline risk are generated from the control arm of the POINT trial because it was a multinational study and so the population was more diverse.

Patient-important functional disability was defined as modified Rankin scale score of ≥2 as defined by the panel (see table 2).

Definitions of the modified Rankin scale

Duration of DAPT with clopidogrel and aspirin

The panel was confident that DAPT given for 10-21 days compared with 22-90 days results in:

The maximum benefit occurred in the first 10 days.

The panel discussed how patients might weigh the benefit of reduced stroke with DAPT against its harm of increased bleeding. The panel believed that most patients would consider a stroke considerably worse than a bleed and so would choose DAPT over single agent therapy. There was no published evidence to support this from patients considering DAPT, but this view is consistent with a systematic review of values and preferences in decision making for antithrombotic therapy.18 In that scenario patients considered non-fatal stroke (thrombotic or haemorrhagic) to be two to three times worse than serious gastrointestinal bleeding.

The panel believed that all or almost all patients would choose 10-21 days of therapy rather than 22-90 days as shorter therapy is associated with equivalent benefit and less harm. 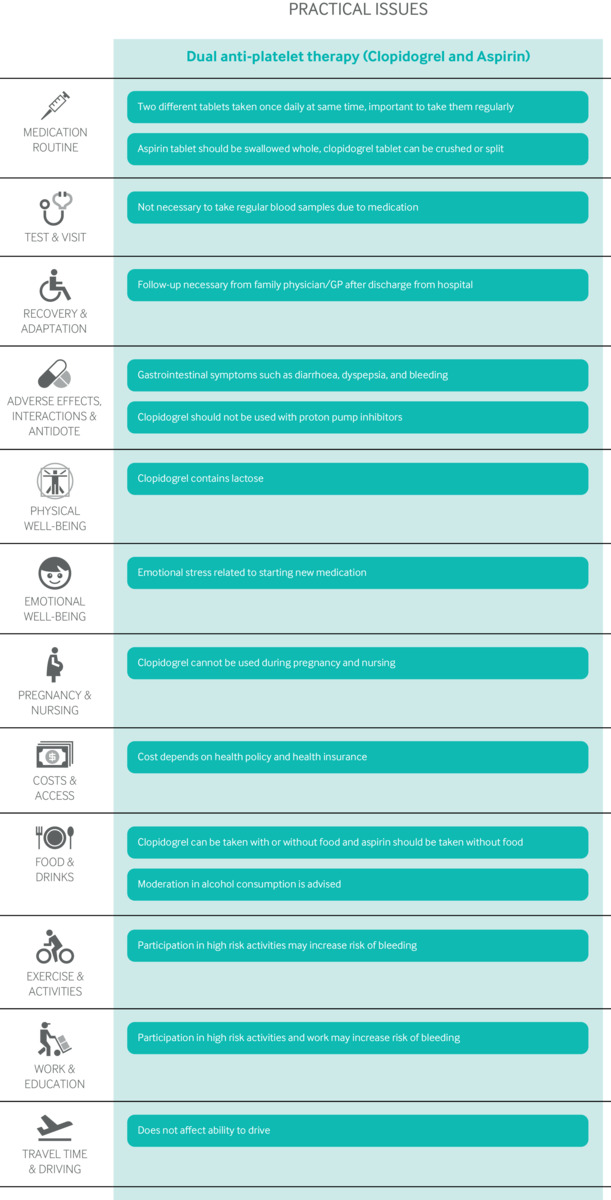 When should patients begin their DAPT?

How should patients respond if experiencing adverse effects of DAPT?

We are most confident of the stroke reduction with clopidogrel in the first seven days after commencement. If adverse effects are minor, patients may be well advised to continue until at least seven days.

There were no head to head comparisons in the studies to give clear guidance on what loading and maintenance dose to offer. However, the following considerations may be useful:

The addition of a second agent, likely clopidogrel, adds to the immediate cost of treatment. This drug is, however, widely available and relatively inexpensive, and the duration of use is short. Moreover, the cost savings related to stroke reduction are likely to be as much or more than the costs of clopidogrel administration.

The following remains uncertain for clinicians and patients:

Table 4 shows evidence that has emerged since the publication of this article. As new evidence is published, a group will assess the new evidence and make a judgment on to what extent it is expected to alter the recommendation.

Three people with lived experience of stroke, and one person with lived experience as a carer for a patient with stroke, were full panel members. They identified and rated outcomes, and led the discussion on values and preferences. The patient partners rated all included outcomes as important to them. Although these values may not be shared by all patients for all outcomes considered, the panel expected little variation in how much importance other patients would place on the critical outcomes of recurrent non-fatal stroke, moderate to major bleeding events, all-cause mortality, functional disability and quality of life.

Patients and carers were instrumental to this guideline in weighing the benefits and harms of DAPT. They clearly articulated the consistent view that avoiding recurrent stroke is paramount in those with transient ischaemic attack and minor stroke and that most would be willing to risk extracranial bleeding to achieve this.

We thank them for their time and valuable input.