Universal health coverage means that every person everywhere should have affordable access to good quality essential health services. The governments of South Asian countries have embraced the goal of universal health coverage, which is the centrepiece of commitments to deliver the third health related sustainable development goal (SDG). Universal health coverage is linked to other SDGs related to poverty (SDG 1), education (SDG 4), gender (SDG 5), equality (SDG 10), and partnerships (SDG 17).1 Its association with SDG 11 focused on sustainable cities and communities, is comparatively overlooked.

An impediment to achieving universal health coverage is rapid urbanisation. A powerful engine of social and economic growth in the region, urbanisation also brings uneven development and hampers efforts to protect the health and access to healthcare of the urban poor and disadvantaged in South Asian cities. The complexities of scale, rapidity of change, and the diversity of urban dwellers upend typical approaches to financial protection and overwhelm the capacity of urban health systems.

A review of grey and published literature strongly indicates that these urban complexities and the growing health disparities they produce require an urban sensitive approach to universal health coverage. We suggest a simple framework that identifies three areas of priority intervention that are necessary to achieving universal health coverage and greater health equity in South Asian cities (fig 1). We describe the realities of each of these areas and suggest priority actions based on this framework. 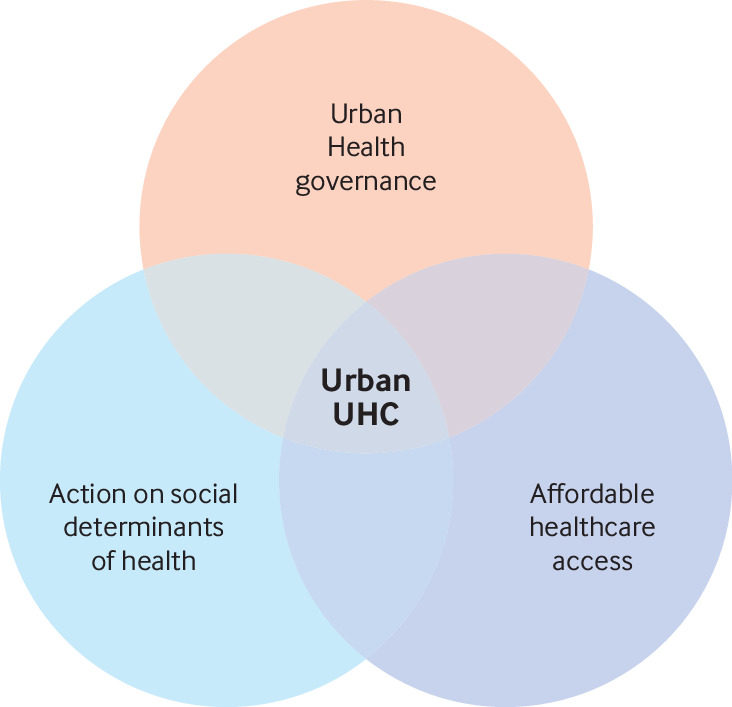 South Asia’s urban population is projected to grow to 250 million by 2030.2 The agglomeration of people, innovation, and industry in cities is expected to increase the GDP by ≥7% a year. Greater prosperity is not confined to megacities of >10 million (fig 2), but also evident in the rapid proliferation of middle sized towns and cities.3 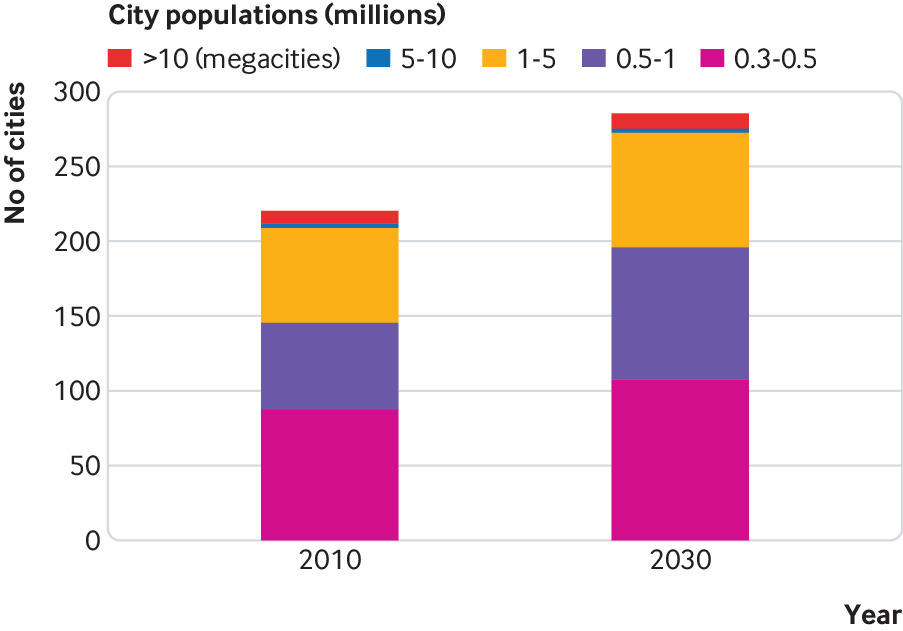 Pattern of urbanisation in South Asia

The demographic pressures of rural, urban, intercity, and intercountry migration, extreme disparities of living conditions across social classes, hazardous transport and stressful traffic conditions, a changing climate, and erratic weather patterns create a wide range of challenges to health in South Asian cities. These include the threat of old and emerging infectious diseases; malnutrition, from underweight and stunting to overweight and obesity; maternal and child health; non-communicable diseases—a leading burden of disease; mental health disorders; and injuries related to road accidents, violence, and the workplace.4

Within urban settings, among the most endangered by health risks and the least likely to have access to affordable health services are those living in informal settlements or slums, which are an entry point for migrants and home to about 130 million South Asians.2 The disparities in health outcomes between those in the highest and lowest socioeconomic quintiles are enormous, with rural dwellers outperforming the urban poorest on almost every indicator (fig 3). 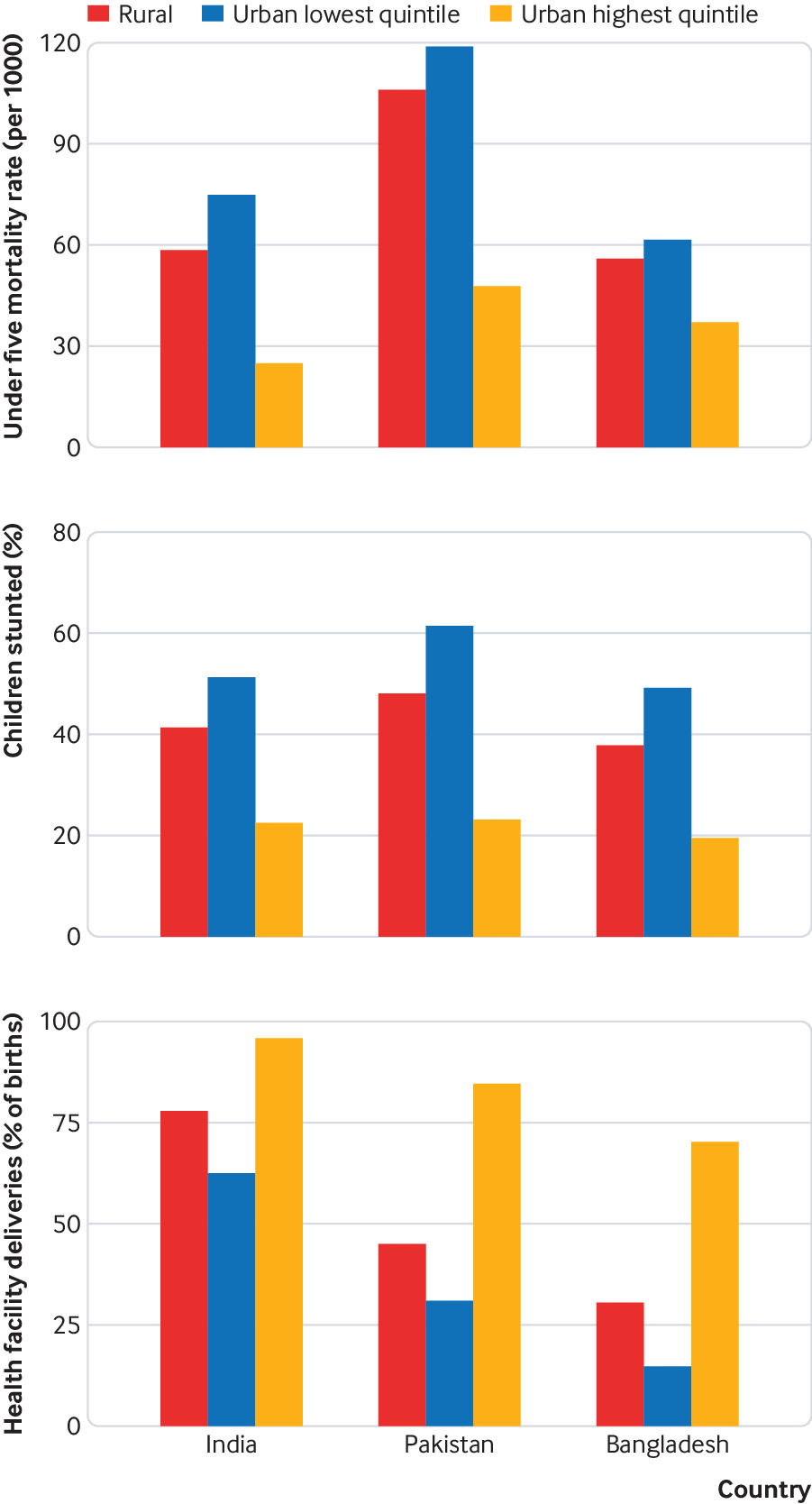 Perhaps the greatest challenge in realising universal health coverage in South Asia’s cities is urban health governance. Typically complex and often contested, many urban health governance structures in the region echo a shared British colonial past.5 This legacy left responsibilities for primary healthcare delivery and services related to health, like water and sanitation, to cities and municipalities.6789 Today, these authorities typically lack human, financial, and technical resources,10 even when provision of such services is constitutionally mandated.511 Efforts to devolve power to city governments are motivated by the principle of subsidiarity. This brings decision making closer to the people by giving responsibility for key public services to locally elected officials. However, in practice, urban governance for health is distributed unevenly across national, regional, and municipal governments.57 It spans public, private for-profit, and not-for-profit providers of various types,1213 and is characterised by internal politics at various levels,141516 and almost systemic exclusion of vulnerable populations.17

South Asian cities are distinguished by a large private sector,1318 with the power to sustain existing profit and market share. The private sector is weakly regulated and largely unaccredited and ignored in national health information systems. Practices such as overcharging, inappropriate referral, substandard or unnecessary treatment, dual practice, bribes, and pharmaceutical industry influence are also widespread.1920

Compounding these challenges are insufficient allocations towards urban health reforms. This is due, in part, to the historical emphasis (much needed, of course) on rural primary healthcare systems.516 The lack of investment, coordination, and oversight characterising health systems in South Asian cities has had the effect of urban health governance being “nobody’s business.”

In most South Asian cities, public sector service delivery is strong at the tertiary level but overcrowded as government hospitals serve city residents as well as patients from around the country.23 Research suggests that the public system has been unable to provide universal access to the required range of primary health services additional to maternal and child healthcare.524 Referral across levels of care is neglected, which means that medical treatment is prioritised over prevention and wellness.24 Dubious practices are also common, such as the transfer of patients at high risk from private facilities to public sector hospitals.25 A notable exception is Sri Lanka, where high technical quality in inpatient and outpatient primary care has been observed in both public and private sectors.2627

At the same time, demand for care has increased, with the private sector filling the gap. This includes multiple levels of specialisation and different systems of medicine provision with a wide range of costs and quality, from boutique hospital chains to itinerant drug peddlers.132829 It is not surprising that urban populations in South Asia are more likely to consult a private healthcare provider (table 1). Informal drug shops clustering in and around hospitals and informal settlements are the first point of care for many of the urban poor seeking longer hours of operation, credit, and unregulated access to medicine.530

Access inequities continue to grow as a result of high out-of-pocket expenditure on health. This is encouraged by provider practices of irrational prescribing and unnecessary care, and patient demand for investigations and treatments, such as injections and antibiotics, to hasten recovery.28 Consequently, spending on medicines and diagnostics accounts for around two thirds of national out-of-pocket expenditure across South Asia, largely due to urban spending.293132 In the absence of social insurance, rational care seeking, and reduced costs of care, the rates of medical impoverishment are expected to increase.33 Already the risk of incurring catastrophic health expenditure and impoverishment due to out-of-pocket spending is substantial in South Asian countries (table 2). Urban specific data are lacking, but this risk is likely to be as great or even greater among poor urban households compared with the rural average.

Health in South Asian cities is powerfully determined by urbanisation and other determinants of health, which intersect and amplify inequities in health outcomes.35363738 These are most visible in vast informal settlements where conditions of overcrowding, inadequate sanitation, poor access to clean water, poverty, malnutrition, and proximity to open drains, riverbanks, and dumping sites increase vulnerability to infectious diseases such as diarrhoea, respiratory illness, and tuberculosis.53940 Urban density and lifestyles also contribute to rising rates of cardiovascular disease, diabetes, asthma, and cancers and their risk factors.52941 The harmful health effects of toxic air pollution related to vehicular and industrial emissions, burning, dust, and construction are ubiquitous in the megacities of South Asia.4243 The depletion and disruption of natural environmental systems, including the water supply, coupled with the destabilising effects of climate change, are a further challenge to South Asia’s cities, with population densities among the highest in the world.44

Crime and violence are simmering determinants of urban health, affecting the mental health and security of all urban dwellers, but with disproportionate effects on women: a recent poll ranked Karachi, Delhi, and Dhaka among the 10 most dangerous megacities for women in the world.454647

The health effects of rapid, unplanned urbanisation are also apparent in high rates of pedestrian and occupational injuries and deaths, especially among the poorest.45

Towards an urban sensitive approach to universal health coverage

To attain universal health coverage in South Asian countries, the specific challenges of urban settings must be taken into account. However, current frameworks provide inadequate guidance. Galea et al offer a research model that recognises the many influences on the health of urban populations. However, it fails to capture the interactions that produce inequities in health that must be dealt with when designing interventions.48 The framework of the World Health Organization Commission on the Social Determinants of Health (CSDH) illustrates how structural and intermediate factors interact, leading to health inequities. It does not state which of these influences is more or less important in urban settings.49 The CSDH knowledge networks have used health assessment to both monitor and act on urban health inequities. The results are promising, albeit in cities outside South Asia.5051 Frameworks guiding efforts towards universal healthcare focus on service coverage and its financing, with priority given to financial protection of the poor and disadvantaged. They acknowledge that governance and social determinants are important, but their particular significance in achieving urban universal health coverage is not emphasised.34

The framework we present applies our understanding of universal health coverage to the scale and complexities of South Asian urban cities. It shows how the features and activities of urban governance, health service delivery, and sectors influencing health must coalesce to provide universal health coverage in view of the growing demand for services and increasing inequities arising from rapid, unplanned urbanisation.

The first domain is urban health governance, and the need to strengthen regulation of a large and diverse healthcare landscape, and to ensure that all sectors consider health effects. To ensure a more equitable distribution of power and resources, forms of governance are required that engage and empower urban citizens, especially the most disadvantaged, and promote accountability of all stakeholders.

A second dimension is affordable healthcare access. This requires attention to subgroups at particular risk of poor health and medical impoverishment. In addition to a solid foundation of quality primary healthcare with effective referral, we must consider financing and social protection, public-private partnerships that enable universal health coverage and also reduce any barriers to receiving services among vulnerable populations.

The third dimension incorporates actions that tackle the social determinants of health equity. These include intersectoral actions in housing, food, transportation, air quality, water, and sanitation, and other determinants that affect population subgroups differentially and prevent attainment of universal urban health reform.

This framework is intended to catalyse cross-city as well as regional learning and reflection to develop urban sensitive interventions as part of universal health coverage reform in the region as a whole.