Men outnumber women three to one in some specialties

Men continue to outnumber women in most medical specialties, and in some of the largest specialties there are three times as many men as women.

Overall, 58% of consultants and higher specialty trainees (years 3 to 8) are men, though in some large specialties there is a more even gender split. For instance, 51% of doctors in geriatric medicine are women. 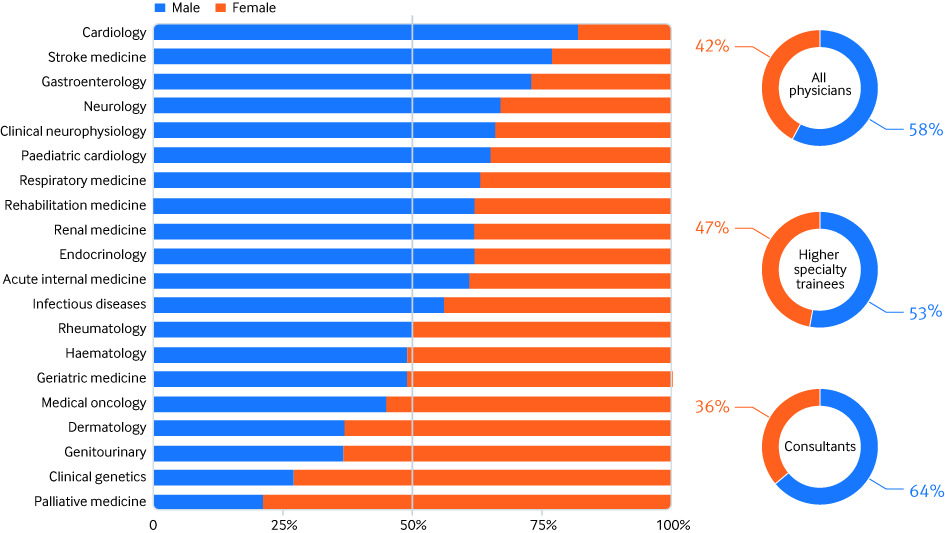 The figure (fig 1) shows the variation across specialties. The data were provided to The BMJ by the Royal College of Physicians, collected as part of the college’s annual census of physicians. The figure shows the 20 medical specialties that had the greatest number of respondents.

The smaller specialties, each of which had fewer than 160 respondents, show a similar split, with men dominating in all but a handful. These smaller specialties are metabolic medicine (in which 85% of doctors are men); clinical pharmacology and therapeutics (77%); general internal medicine (74%); sport and exercise medicine (71%); nuclear medicine (68%); medical ophthalmology (63%); immunology (56%); pharmaceutical medicine (56%); audiovestibular medicine (45%); and allergy (43%).