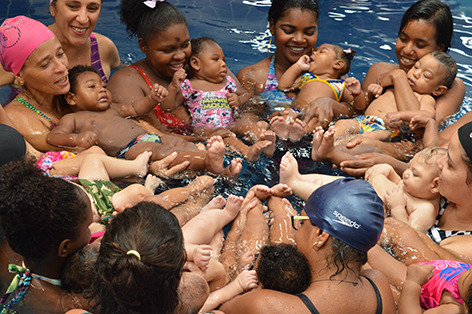 The babies splash around happily, the mothers are joyful; here is the positive side of bringing up a child with a Zika related disability.

In 2015 the plight of pregnant women who had been infected by the Zika virus, leaving their babies with microcephaly, was reported worldwide.1 Joana Passos, a marketing executive living in Salvador, Brazil, was one of them. She says that having Gabriela, 2, was the best thing that happened to her. “Gabriela loves to play with her older sister. She smiles a lot. ”

Passos accepts that her life has changed irrevocably: Gabriela has appointments with doctors and therapists every day. “She has the busiest schedule in the family,” she laughs.

But the change is not simply due to having a child with disabilities. Passos has founded an advocacy and support group called Abraço a Microcefalia (Embrace Microcephaly; http://abracoamicrocefalia.com.br) with her friend Mila Mendonça, whose son Gabriel is also affected.

The group offers social support and helps ensure that more than 200 children receive rehabilitation from physiotherapists and occupational therapists, as well as the swimming sessions.

Last week Passos and Mendonça were in London at the Royal Society of Tropical Medicine and Hygiene to highlight their work and share their experiences. Passos remembers how at the height of the epidemic researchers descended on the families, who were often in a vulnerable situation. She says that though many were empathetic others were not. “They need to realise there’s a family who was expecting this child: it is a child, not a guinea pig for research,” she says.

Last year the two women became involved in a project led by Hannah Kuper, a researcher in global disability at the London School of Hygiene and Tropical Medicine, who was developing a parent support programme with colleagues in Brazil. So far, Kuper has found that there seems to be less stigma associated with Zika related disability, which is not true for other disabilities such as cerebral palsy, and less depression among the carers.

Despite those initial findings, Passos says that the need for support is ever present. “The epidemic has not finished: for us, it is just starting.”

See other articles in issue 8169