In an interview with The BMJ, Liam Donaldson, England’s chief medical officer at the time, recalled the situation around the October 2009 roll-out: “The UK had worked for several years on its pandemic influenza plans, as part of a globally coordinated approach. This included, well in advance, establishing the process for developing and introducing a vaccine in such a public health emergency.

“Faced with an emerging pandemic of unknown severity, the process was initiated. The national scientific committee for vaccines (the JCVI) and the statutory medicines regulatory authorities were fully engaged in the procedural steps that led to the introduction and use of the vaccine. This was not a policy decision taken in the absence of such expertise,” he said.

Vaccines against influenza are arguably the only vaccines that a notable portion of healthcare professionals decline despite recommendations.6 And in late 2009, vaccines against the H1N1 swine flu—which was turning out to be a far milder pandemic than officials had predicted—were even more controversial than normal.

In Germany, senior physicians expressed doubts about GlaxoSmithKline’s Pandemrix vaccine. They were concerned about potential side effects triggered by the AS03 adjuvant, an oil-in-water emulsion that it contained to boost effectiveness.7 Then controversy erupted when the German newspaper Der Spiegel reported that top politicians and government employees were going to receive Celvapan, Baxter’s unadjuvanted H1N1 vaccine, not Pandemrix.7

The concerns, it seems, were prescient. A year later, signs of a problem with Pandemrix were emerging through postmarket reports of narcolepsy, predominantly among children and adolescents in Sweden and Finland.8 Multiple academic and government led studies subsequently judged that the relation between Pandemrix and narcolepsy was likely to be causal.91011 Over 1300 people are estimated to have been affected among the roughly 30 million vaccinated across Europe,12 including around 100 families in the UK.13

However, GSK and the European Medicines Agency, which licensed Pandemrix, have not accepted that the association with narcolepsy has been proved to be causal, and research on the topic continues.14 GSK told The BMJ that “further research is needed to confirm what role Pandemrix may have played in the development of narcolepsy among those affected.”

Claims for compensation followed, with many still being fought in the courts.15

Now, eight years after the outbreak, new information is emerging from one of the lawsuits that, months before the narcolepsy cases were reported, the manufacturer and public health officials were aware of other serious adverse events logged in relation to Pandemrix.

In documents obtained through the pretrial discovery process (see supplementary data on bmj.com), prosecutors suing the Irish Minister of Health, Health Service Executive, Health Products Regulatory Authority, and GSK have found a string of GSK postmarketing safety reports that show a striking difference in the number and frequency of adverse events reported for three GSK pandemic vaccines approved and used across the world: Pandemrix, Arepanrix, a similar H1N1 vaccine that also contained AS03 adjuvant, and an H1N1 vaccine without adjuvant (no brand name is given).

The BMJ learnt of the reports from my colleague Tom Jefferson, a medically trained epidemiologist who was hired as an expert witness by the solicitors representing Aoife Bennett, an Irish woman who developed narcolepsy after vaccination with Pandemrix in 2009. Jefferson took on the case in 2015, and last year the lawyers received a copy of the GSK safety reports that had been emailed within the company and to at least one regulator (Ireland). Adverse event tables embedded in nine reports spanning the four months between December 2009 and March 2010 offer a glimpse into the vaccines’ safety profiles.

“When I saw those tables, I just fell off the chair. A consumer can figure out what’s going on here,” Jefferson told me (table 1).

Jefferson immediately calculated the adverse event rates for each vaccine, which showed large differences between Pandemrix and Arepanrix. Any real differences between the vaccines would be especially alarming because Pandemrix and Arepanrix are, broadly speaking, the same vaccine manufactured in different facilities and used in different countries. Divergent rates of adverse events might implicate a manufacturing problem.

“The odds ratios, the point estimates, are all high. And some of them are significantly high—5.39 [95% confidence interval 3.70 to 7.85] for deaths [for Pandemrix v the other vaccines],” Jefferson said.

“The thing that struck me was not just that the odds ratios were high, but the fact that nobody had tabulated and analysed them,” he said, pointing out that the GSK reports provided numerator and denominator data sufficient to calculate the odds ratios but did not actually contain those calculations. 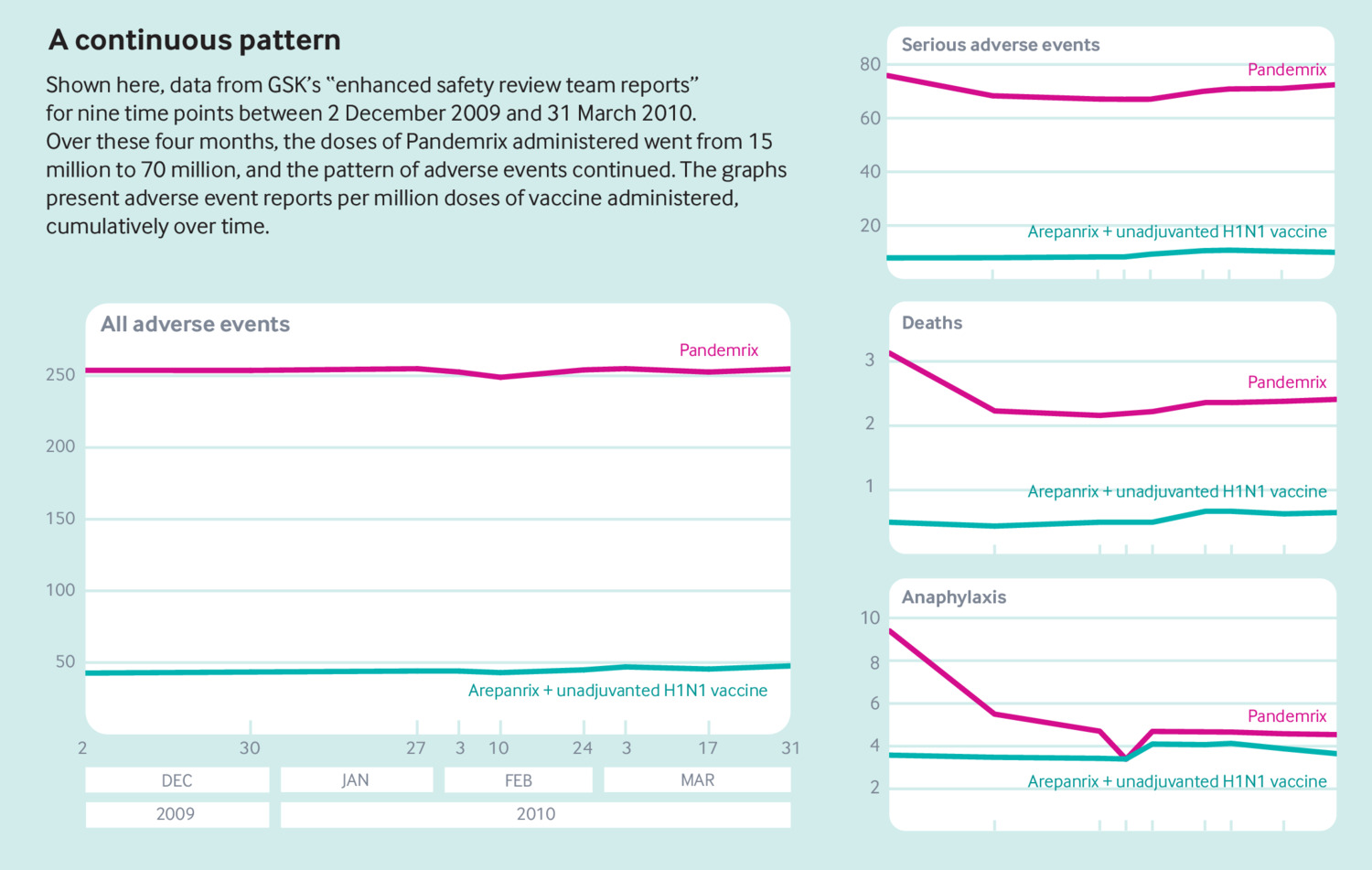 The data are insufficient to draw conclusions about cause and effect, but for Gillian O’Connor, the solicitor representing Bennett, they raise serious questions about transparency. The disparity, she wrote in an affidavit filed in court, was “of such striking difference that any person contemplating taking the Pandemrix vaccine would be likely, if in receipt of this information, not to choose to have the Pandemrix vaccination.”

But neither GSK nor the health authorities seem to have made the information public—nor is it clear that the disparity was investigated. This is in contrast to the reaction to narcolepsy, which quickly made news headlines and was the subject of a GSK press release and investigation17 in a matter of weeks after the first reports from Sweden and Finland.

In many of the GSK reports, the company briefly mentions having conducted “safety reviews”—for example, with respect to anaphylaxis, facial palsy, and Guillain-Barré syndrome. The BMJ asked GSK for a copy of those reviews but it did not provide them.

In a statement, GSK wrote: “After the introduction of Pandemrix, GSK continuously evaluated all available safety data and shared the data with the EMA and other regulatory authorities where the vaccine was licensed so that the authorities could conduct their own independent assessments. EMA made weekly summaries of the data provided by GSK and other manufacturers publicly accessible and they remain accessible through the EMA’s website.”

The BMJ asked GSK whether it ever undertook any investigations to understand the discrepancy in adverse event reporting between Pandemrix and Arepanrix, whether it notified healthcare providers about the discrepancies, whether it considered pulling Pandemrix from the market, or considered recommending Arepanrix or another company’s vaccine. But GSK declined to answer these and all of The BMJ’s questions, citing ongoing litigation.

The BMJ asked the UK Department of Health why it recommended Pandemrix over Baxter’s Celvapan, but the department also declined to comment, calling the question “quite technical” and suggesting we submit a freedom of information request for an answer.

In December 2009 demonstrators in Scotland took to the streets to challenge the government’s swine flu vaccine campaign arguing it was out of step with the mild pandemic.18

The vaccination programme continued in Ireland as well. “The Irish government kept inviting people to get vaccinated,” Jefferson observed. “This was when it was quite clear that the pandemic was on the wane and it was nowhere near the catastrophe portrayed by influenza researchers, governments, industry, and the media.”

Clare Daly, a member of the Irish parliament, called the adverse events after Pandemrix a “completely avoidable catastrophe,” and has been demanding answers for over a year.19 In the Irish National Assembly last year, she told the then prime minister, Enda Kenny, “The Health Service Executive (HSE) decided to purchase Pandemrix and continued to distribute it even after they knew it was dangerous and untested, and before most of the public in Ireland received it.”20 In response, the Taoiseach said that concerns about the safety of Pandemrix and actions by GSK deserve “immediate analysis.” The BMJ requested an update on the investigation from the Irish Department of Health but did not receive a direct answer.

But, had it wanted to, did the agency have the data to conduct such an analysis? Despite the similarity between the two vaccines, Arepanrix was not authorised in the EU until March 2010, late in the pandemic, and data reporting requirements for the two vaccines differed.

“While it might have been possible to estimate reporting rates based on usage data, which are difficult to obtain during a pandemic, EMA does not have a methodology to compare reporting rates between two products (note that the pandemic influenza pharmacovigilance updates included number of reports, not rates),” an EMA spokesperson said.

Jefferson was uncompelled. “What is the purpose of pharmacovigilance if nobody is acting on the information? This information took eight years to come to light through academic work and litigation. Is this acceptable? If the information at our disposal is partial, that is the direct consequence of secrecy, which should not surround any public health intervention.”

Pandemrix and Arepanrix were designed for a pandemic and were removed from global markets after the pandemic. Whatever adverse events they may have caused, they are vaccines of the past. But the events of 2009-10 raise fundamental questions about the transparency of information. When do public health officials have a duty to warn the public over possible harms of vaccines detected through pharmacovigilance? How much detail should the public be provided with, who should provide it, and should the provision of such information be proactive or passive?

If history were to repeat itself, does the public have a right to know?