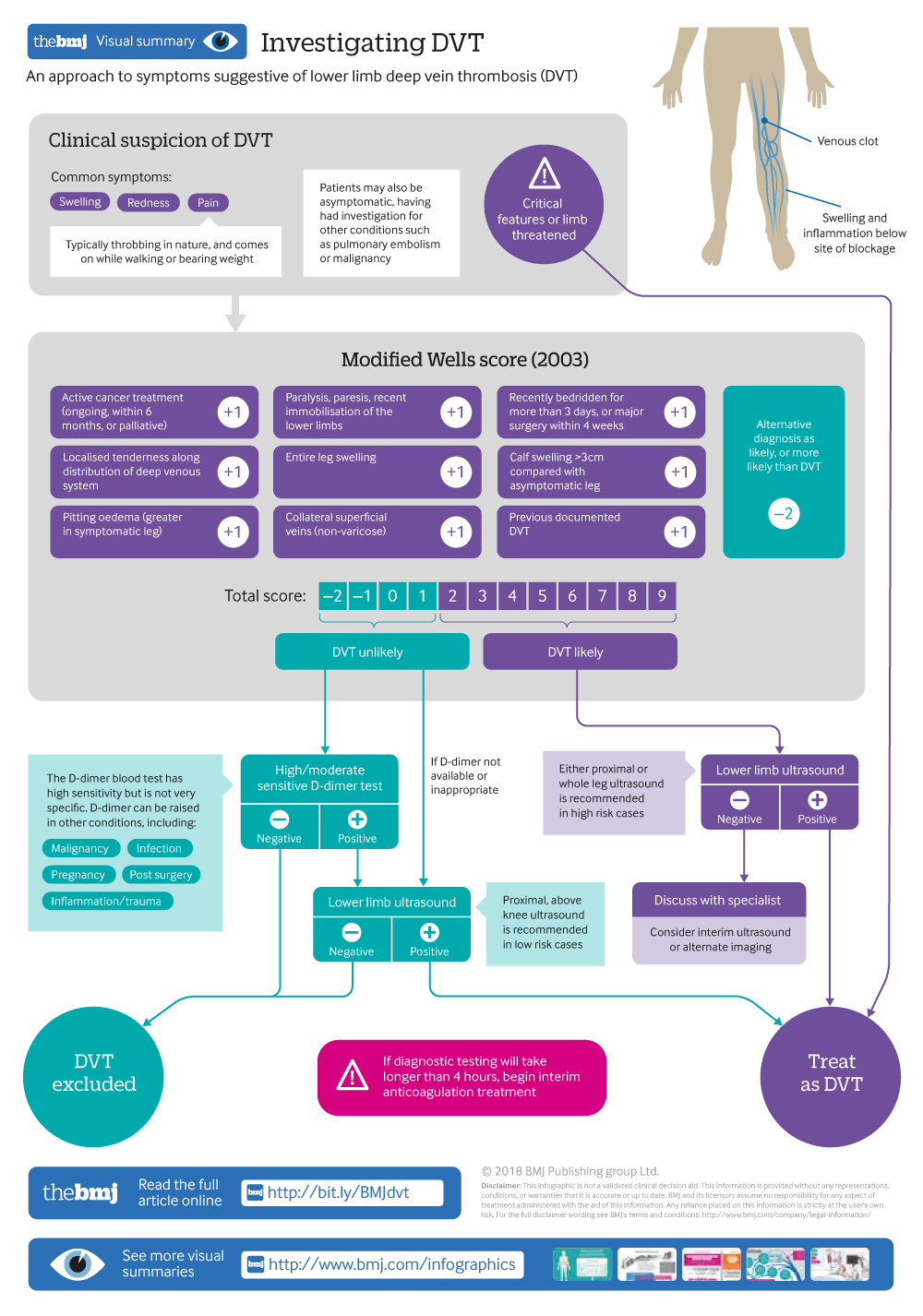 Deep vein thrombosis (DVT) commonly affects the lower limb, with clot formation beginning in a deep calf vein and propagating proximally.1 It is a common venous thromboembolic (VTE) disorder with an incidence of nearly 1.6 per 1000 inhabitants a year.234 The rate of involvement of particular sites varies: distal veins 40%, popliteal 16%, femoral 20%, common femoral 20%, and iliac veins 4%.1 Certain medical conditions listed in box 1 increase the likelihood of clot formation in the deep veins. Upper limb DVT represents less than 10% of all DVT, and central venous catheters are the main risk factor.7 Venocaval thromboses are rare and are associated with malignancy, compression, and vascular abnormalities.8 This article provides an overview for non-specialists on initial approach to patients with suspected DVT.

How do patients present?

Early recognition and referral for further investigation of DVT is likely to happen in primary care, however, diagnosis and initiation of anticoagulant treatment usually takes place in secondary care or hospital settings.

Pain, swelling, and redness in the affected limb are common symptoms. Pain is typically throbbing in nature, and comes on while walking or bearing weight. Skin changes include erythema, warmth, and oedema (fig 1).910 Some patients are asymptomatic, having had investigation for other conditions such as pulmonary embolism or malignancy11 (although data on how many is unavailable). Alternative diagnoses to consider include cellulitis, ruptured Baker’s cyst, chronic venous insufficiency, and lymphoedema.234

Deep vein thrombosis in the right leg of a patient, with leg swelling and erythema visible

How is it diagnosed?

Refer patients with symptoms suggestive of DVT to acute/emergency services for further evaluation.12 Diagnosis is based on clinical assessment and investigations (ultrasound or D-dimer) being conducted ideally within four hours of presentation as per NICE recommendations.12 If a delay is expected, interim anticoagulation can be offered in hospital or a secondary care setting (discussed below under ‘How is it treated?’) to avoid clot progression and the risk of pulmonary embolism.12 Ultrasound investigation is recommended within 24 hours in suspected cases.12

The pre-test probability of DVT can be calculated using a validated score, such as the Wells score (box 2), which combines assessment for risk factors and clinical features of DVT.12 NICE recommends using the modified two-tier Wells score, whereas the American College of Chest Physicians (ACCP) guidelines cite the three-tiered Wells score.910 Both scores are clinically acceptable, and local departmental guidance determines which is used in practice.1214

Scoring criteria as for Wells Score, with the addition of

In clinical trials,1013 the Wells score has shown a high negative predictive value in patients with a low probability score for DVT (negative predictive value 99.7%, 95% confidence interval 98.3% to 100%). It is thus effective to exclude DVT in these patients. However, the score had a lower negative predictive value in high risk patients (82%, 95% confidence interval 98.3% to 100%), and should not be used to rule out DVT in these patients.1013 Patients were excluded if they were under 18, had less than three months’ life expectancy, were pregnant, or had already started anticoagulant treatment. The score is not appropriate in these groups. Investigation with D-dimer or ultrasound is required after calculating the pre-test probability in all patients, but the investigation pathway varies (infographic).14

Proximal, above knee ultrasound is recommended in low risk cases, and either proximal or whole leg in high risk cases.1214 Rarely, a repeat scan after one week might be required to ensure DVT is not missed, for example in patients with a moderate/high probability and an initial negative ultrasound scan. Initiate anticoagulation during this window period.1214

Alternative imaging modalities, such as venography (computed tomography or magnetic resonance imaging, where radio-opaque contrast is injected to visualise the patency of vasculature) can be used if there is diagnostic uncertainty (eg, an inconclusive ultrasound report that might be caused by chronic venous scarring) or if ultrasound is impractical (eg, plaster cast).14 These modalities are not routinely recommended, and should be discussed with a specialist before requesting them.14

Cancer is a recognised risk factor for developing DVT. Up to 10% of DVT patients are subsequently diagnosed with a malignancy.1617 However, recent trials have found a low yield from screening for occult malignancy in patients with unprovoked DVT.18192021 NICE now recommends only a limited cancer screen in patients with unprovoked DVT (ie, history, examination, basic blood tests, and age appropriate national cancer screening investigation, eg, in UK, mammography in women who are 50 to 70).12

Inherited and acquired thrombophilias contribute to DVT. There is conflicting guidance on the role of thrombophilia testing,22 and this should be discussed with a haematologist.23

What are the complications?

Common chronic complications after DVT include post-thrombotic syndrome (25%-38%) and venous ulceration (9.8%), whereas pulmonary embolism (6%-32%) is more acute and can be fatal in 5%-10% of cases.124252627 Complications can occur immediately following an acute DVT or several months to years later.

Patients with post-thrombotic syndrome might present with pain, swelling/oedema, leg heaviness, aching, skin discolouration, or venous ulceration. Venous ulcers are typically located medially above the ankle, with an irregular outline, and can be discoloured, oedematous, and exudative. The main risk factors include recurrent ipsilateral DVT and non-therapeutic international normalised ratio (>50% of the time).28 Other risks include advanced age, increased body mass index, female sex, and size and location of thrombosis.2829

How is it treated?

Anticoagulation to prevent clot extension and embolisation is the standard treatment, where bleeding risk permits. It is started in hospital or secondary care settings after a diagnosis of DVT is established, preferably within four hours of presentation.1230

Guidelines from NICE and ACCP recommend direct oral anticoagulants (DOACs) as first line treatment for DVT.1214 DOACs include direct factor Xa inhibitors apixaban, rivaroxaban, and edoxaban, and a direct thrombin inhibitor, dabigatran. Randomised controlled trials have shown DOACs to be at least as effective as vitamin K antagonists in treating thromboembolic events (see supplemental file for details of these trials).31323334 Dabigatran and edoxaban require initial treatment with low molecular weight heparin (LMWH) (>5 days) before commencement of the DOAC, whereas rivaroxaban and apixaban do not313233343536 (see supplementary file). Typically patients are anticoagulated between five and 17 hours of taking these drugs. Caution is advised, however, in patients with chronic renal impairment, particularly with a glomerular filtration rate <30 ml/min, and in patients taking other drugs that have possible risk of interaction.37

These are established anticoagulants that are preferred in certain people, such as those with liver and renal dysfunction, extremes of body weight (<50 kg or >120 kg), and DVT associated with cancer.

Warfarin, a vitamin K antagonist, is an effective and cheap oral anticoagulant. However, it requires frequent monitoring with blood tests, and has a narrow therapeutic window, with bleeding events being not uncommon.30 LMWH is delivered daily or twice daily as a subcutaneous injection. It has a rapid onset of action, predictable anticoagulation effect, and does not require routine monitoring.30

How long is anticoagulation continued?

The optimal duration of anticoagulation depends on what provoked the DVT, bleeding risk, patient preference, and thrombophilia status. Consensus expert opinion is to offer three months of anticoagulation treatment for patients with a DVT provoked by surgery or with a non-surgical transient risk factor.38 Patients with a proximal DVT and a persistent risk factor or high risk of DVT recurrence might be offered lifelong anticoagulation.43 Scoring systems such as the DASH prediction score and HERD002 score (in women) help predict recurrence after an unprovoked VTE event.4344 These might be used for risk stratification of patients to guide duration of anticoagulation.

What other treatments are available?

Some patients, such as those with extensive DVT, might require escalation of treatment beyond simple anticoagulation to reduce complications and recurrence of DVT. Box 3 lists other treatment options for DVT clot dissolution. These might be offered in specialist settings.

Other treatment options for patients with DVT45

A Cochrane review (17 trials, 1103 patients) found that thrombolysis with anticoagulation reduced the incidence of post-thrombotic syndrome by a third compared with anticoagulation alone in patients with lower limb DVT.4647 On follow-up at >5 years, the rate of post-thrombotic syndrome was 390/1000 in the thrombolysis group, compared with 658/1000 in the control group (relative risk 0.58, 95% confidence interval 0.45 to 0.77; P<0.0001). No difference in mortality was observed between the two groups. Bleeding complications were increased in the thrombolysis group compared with controls (relative risk 2.23; 95% confidence interval 1.41 to 3.52, P=0.0006). There is limited data on the effect of thrombolysis in preventing leg ulceration, pulmonary embolism, and recurrence.

NICE guidelines suggest thrombolysis can be considered in an acute proximal DVT (<14 days) in a patient with low bleeding risk, with good performance status, and life expectancy >1 year.47 Selection of patients must be guided by a multidisciplinary approach, with inputs from a vascular surgeon and interventional radiologist, and must consider patient preferences.2845464748

Is there a role for compression stockings?

How does management of superficial vein thrombosis differ?

What is the efficacy and safety of DOACs for treatment of DVT in patients with cancer?

A patient and carer kindly reviewed an earlier draft of this article. The patient highlighted the importance of making a timely diagnosis of DVT. Based on his suggestion, we have included the timescales suggested by NICE for urgent investigations and initiation of treatment.

See other articles in issue 8142