GPs are increasingly choosing to take early retirement, with the numbers doing so rising threefold over the past decade, data from NHS Digital show. 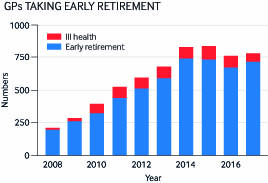 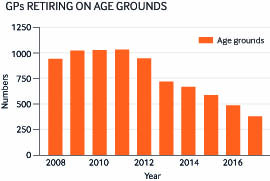 Although more GPs are taking early retirement, they are not doing so earlier in their lives. From 2007 to 08 to 2016-17 the average age at which GPs claim their NHS pension on voluntary early retirement grounds remained steady, at 57.

Earlier this month, Simon Stevens, the chief executive of NHS England, told MPs that changes to pension rules was adding to problems around shortages of GPs. “The department’s evidence to the Review Body on Doctors’ and Dentists’ Remuneration has pointed out that one of the contributory factors is the broad change to the pensions system,” he said.

In April 2016, there was a reduction in the amount of pension benefit that can be drawn from pension schemes, known as the lifetime allowance. The lifetime allowance was introduced in 2006 at a level of £1.5m (€1.72m; $2.12m). It was then gradually increased and reached £1.8m in 2010. A number of reforms since then have reduced the allowance, the most recent being a reduction to £1m in 2016. The Pensions Advisory Service has advised that people who are approaching this limit may want to take their pension early to avoid their benefits exceeding this limit.