The forgotten ones: the misery for millions growing old in India

One out of five people in India will be 60 or older by the year 2050. But the subcontinent is already struggling to cope with the challenges that an ageing society presents, finds Martina Merten

Eight elderly women are sitting on plastic chairs on the terrace. Their colourful saris shine brightly in the afternoon sun. It will soon be 3 pm and they will be served a cup of tea, with lots of milk. Later they will eat an evening meal together, seated around a small wooden table. Perhaps they will take a stroll around the house beforehand. Or watch TV.

Their home, Abhaya Sadan—an Indian retirement home whose name means “the house without fear”—is a peaceful place. It is located outside the city of Coimbatore in the state of Tamil Nadu. The eight women living here, most of them without papers, were lucky because no one wanted them anymore.

One woman broke her wrist in an argument with her daughter-in-law when her son refused to take care of her. Another woman lived alone in poverty after her husband died and her three children had nothing more to do with her. Yet another lived with her grandchild but when she fell ill there was not enough money to help.

One woman’s husband had sought a new wife and taken their only son with him. Since then, she had lived alone, in poverty and abandoned. All eight women had become a burden to their families, to society, in one form or another. And people who become a burden, who can no longer function or work, are left to fend for themselves.

“If you are old, you should die”

“If you are old, you should die, is the mindset of many people in India,” explains TK Nathan, a doctor who heads the Karl Kuebel Foundation for Child and Family (KKF) in Coimbatore. Together with a local charitable non-governmental organisation (NGO) and the financial support of a German couple from Bonn, the KKF ensures that Abhaya Sadan, established in 2016, keeps running for these women.

Social security mechanisms, such as pensions and health insurance, are almost non-existent in India. “Only 1.6% of older destitute citizens get a pension,” says Matthew Cherian of HelpAgeIndia, the largest NGO dedicated to the needs of older people on the subcontinent. And the $5 (£3.62; €4.1) a month they receive is barely enough on which to survive. Cherian says that a third of all Indians should receive a pension. “In theory, India’s policies and guidelines for the elderly are good,” says Cherian, but they often go unimplemented. 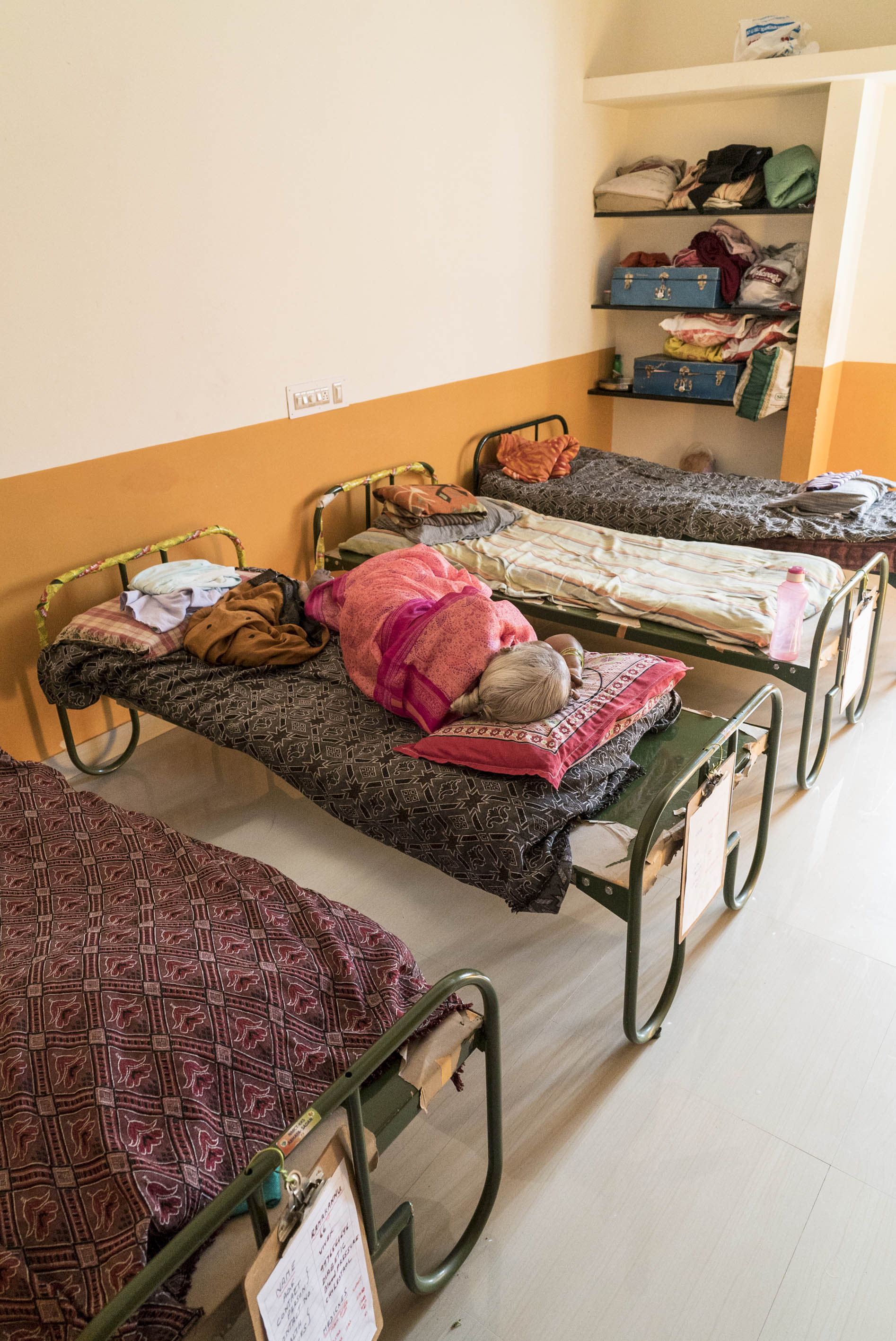 On paper at least, the Indian government has done quite a bit for elderly people. In 2007 the Maintenance and Welfare of Parents and Senior Citizens Act mandated at least one home for at least 150 older residents in each district. This law also forbids anyone responsible for caring for senior citizens from abandoning them, punishable by imprisonment. The National Policy on Senior Citizens, adopted in 2011, promotes long term savings instruments and credit, and advises states to set up homes with assisted living facilities for abandoned senior citizens in every district.1

The few Indians currently receiving a pension represent a drop in the ocean: 120 million people in India are older than 60. By 2050, this population will have swelled to 320 million people, according to the All India Institute for Medical Sciences (AIIMS). One fifth of the entire population will then be senior citizens, says AB Dey, professor and head of the geriatrics department at AIIMS.

Today, two thirds of all men and a third of all women in rural areas have to work into old age to survive. In cities, the proportions are 46% of men and 11% of women, according to the government.2

Like the women now in Abhaya Sadan, many older people are verbally or physically abused at home, HelpAgeIndia surveys indicate. “Ten per cent of old people suffer from depression,” says Cherian. Despite all the policies, places such as Abhaya Sadan are still few and far between. Currently, only 214 000 people call them home. Most facilities depend on donations and have limited finances. Hospices for dying people are a rarity, says Father Thomas Rathappillil of Tamil Nadu state. 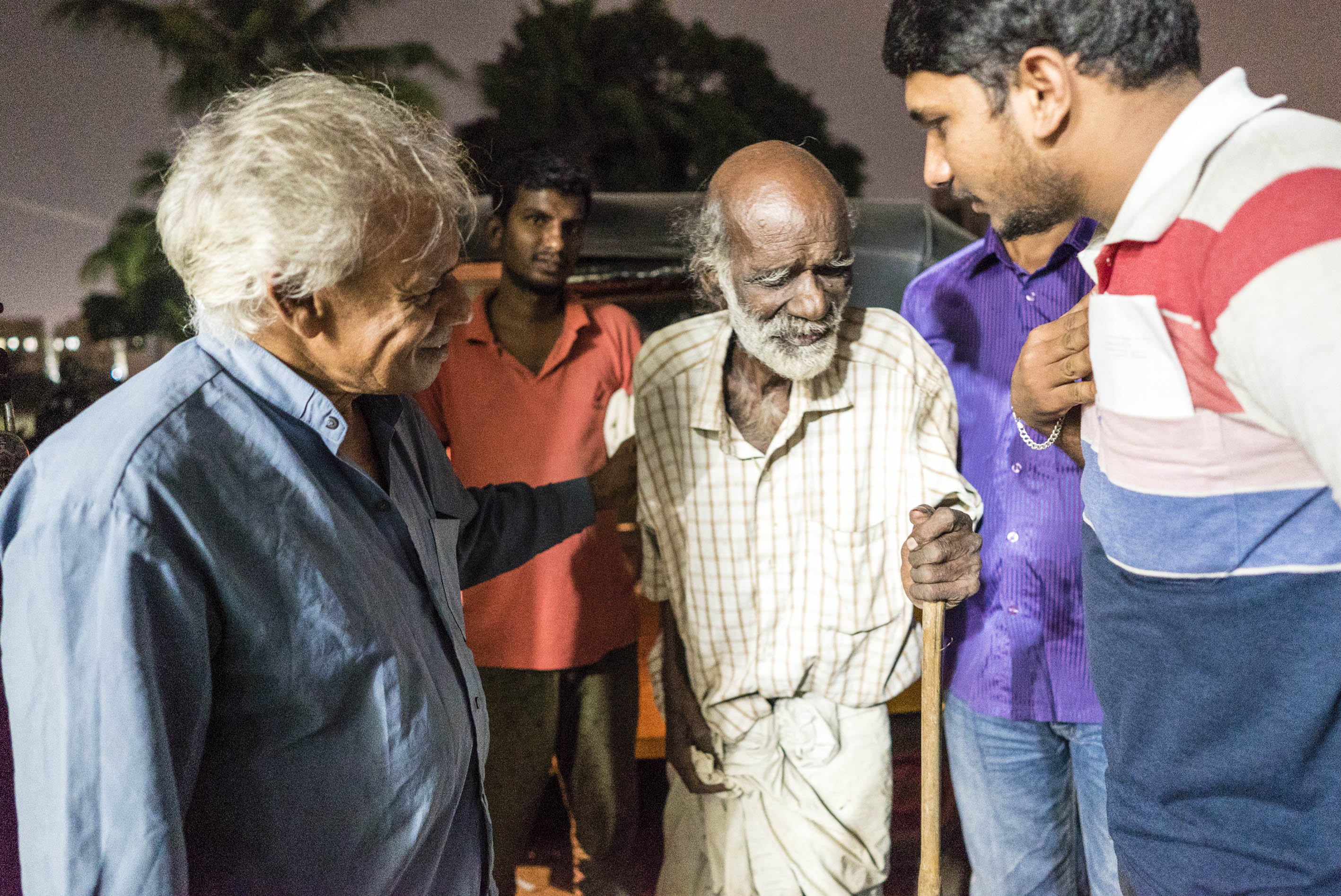 Father Thomas Rathappillil welcomes a man to one of his hospices in Tamil Nadu, Credit: Benjamin Fueglister

Rathappillil hardly needs any sleep. If he got more, he says, he would have less time to help the old people lying on dark street corners, in dusty niches of train stations, or outside the toilets of hospitals.

“They are pushed there by hospital employees,” explains the priest. Sick, old people are outcasts. They are no longer wanted, he says.

In recent years, with the help of donations, Rathappillil has built five hospices throughout the state, housing 750 people in all. Each day, several die. Residents with mental illness live in one part of the building; others in adjacent rooms. They receive meals and medicines. They can wash themselves. They can rest without being kicked away from the curb. But these hospices cannot afford to offer palliative care. 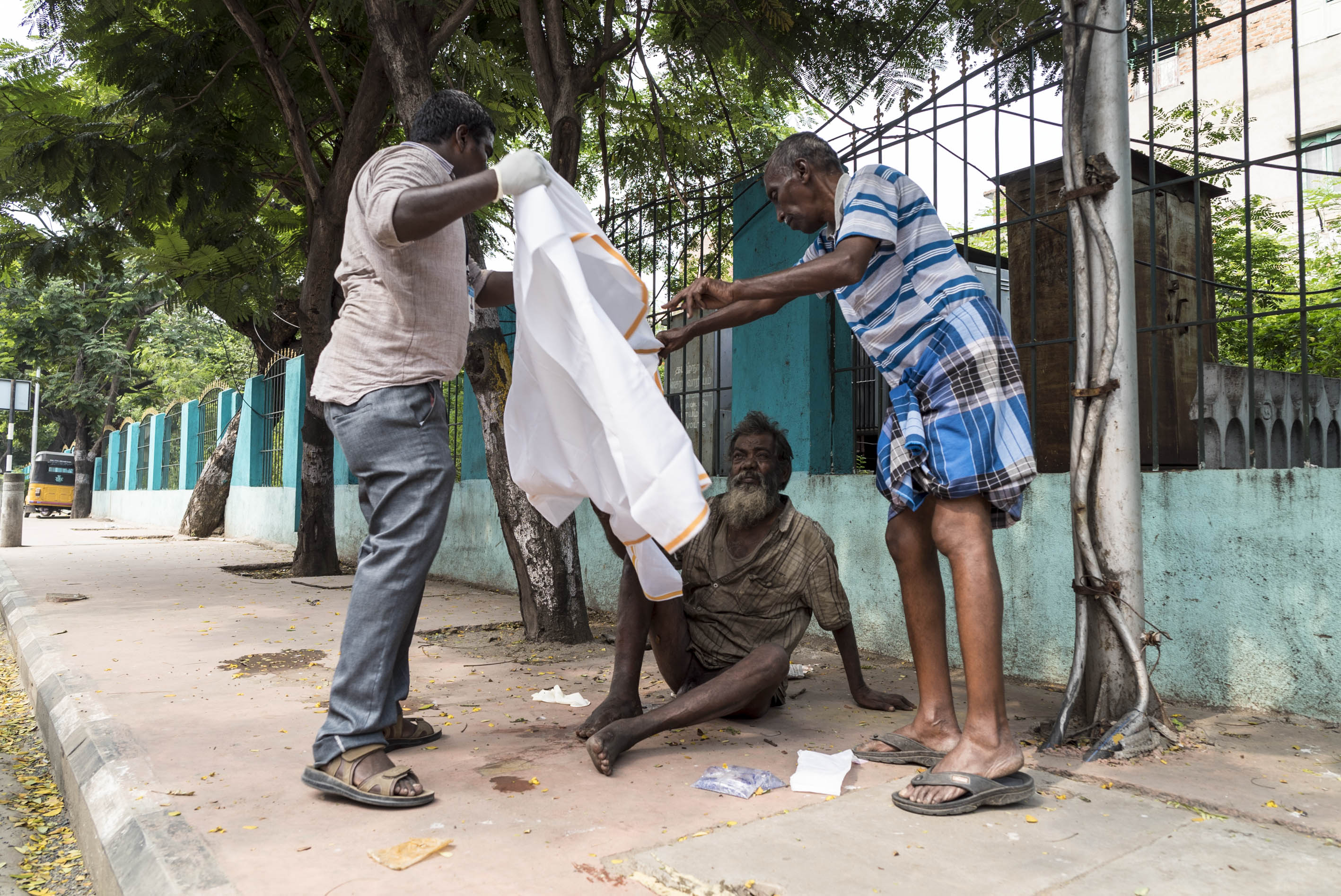 Disintegration of the family

Richer people also often lack dignity in the last stage of life. The large extended family, one of the pillars of Indian society, in which the young care for the old and it is second nature to integrate them in their lives, is disintegrating, explains Nathan.

“We have copied the Western model and now are not able to cope with the consequences,” he says. The children of the expanding middle class want to make their own life decisions. Now they often leave their parents to live independently. Because India lacks other social structures, this is a disastrous decision, Nathan says.

In the clinic of the geriatric specialist Prabha Adhikari, 20 older women and men sit in a circle on chairs. They all look kempt and well nourished. Their children left home long ago, they say. Many live abroad. The seniors come here daily to practise yoga and chat. After the meetings, they feel less lonely. Old people’s homes are not an option for them—“people are unhappy there,” believes Kusumo, a 63 year old woman. 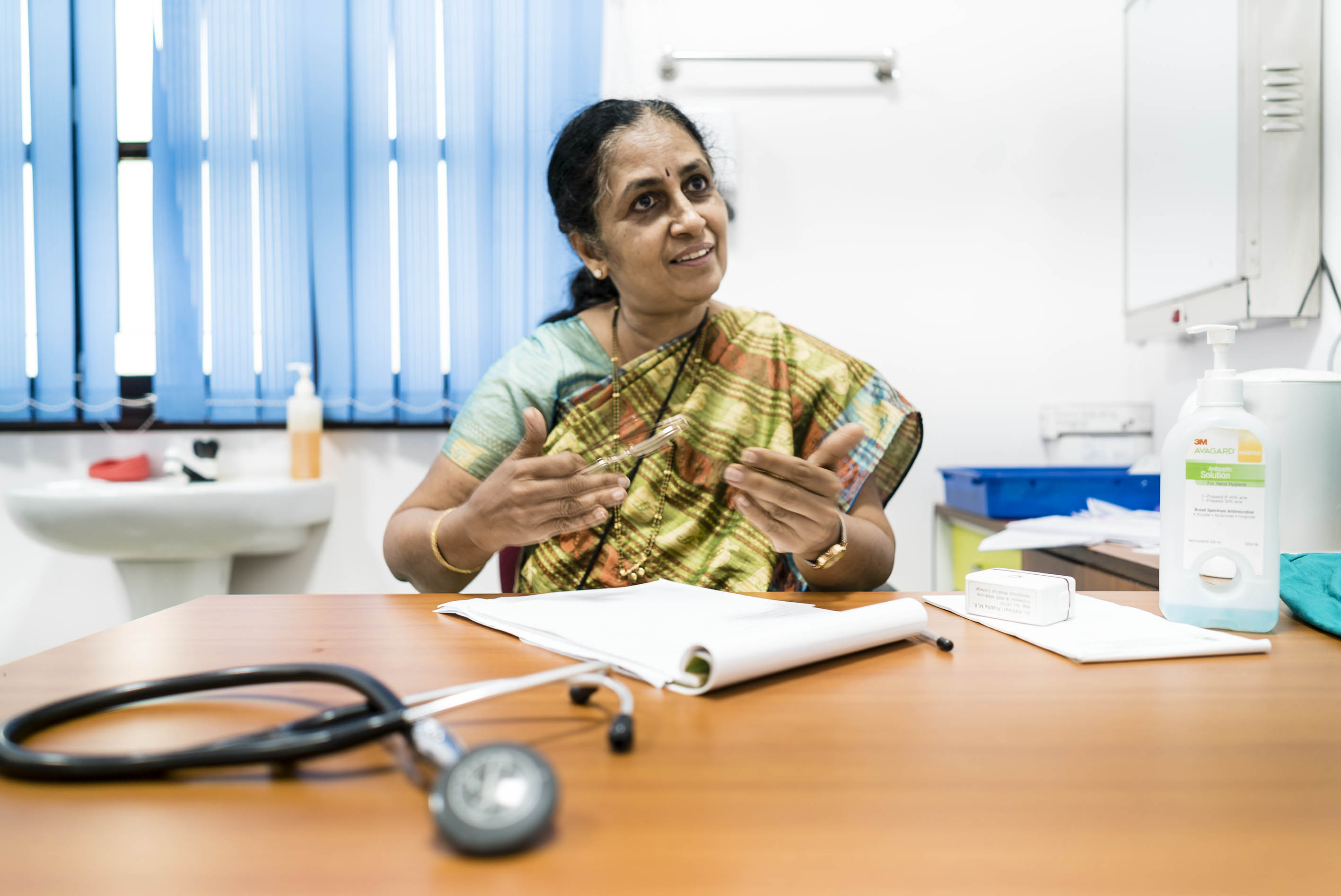 As a pioneer in research on ageing, Adhikari enables older people in Karnataka to come together. Until recently she held a professorship for geriatric medicine at the Manipal University in Mangalore. Few Indian universities teach geriatrics, she says. Each year, eight physicians complete advanced training as specialists in geriatrics. Roughly 100 specialists for internal medicine undergo a year’s geriatric training, explains Adhikari, however, this training wouldn’t be enough to cover all aspects of geriatric medicine. The Indian Medical Association wants a department of geriatrics at every medical school in the country. The main problem with this aspiration, says Adhikari, is the lack of instructors. Another problem, she says, is that many doctors do not want to become geriatricians because the scope of an internal specialist is much broader—and therefore an internist earns more.

The lack of skilled professionals pervades all aspects of geriatric care: there is a shortage of personnel in old people’s homes; in the few hospices, such as those of Father Thomas Rathappillil; and in hospital outpatient care.

Mohan Raj runs a private outpatient care service in Mangalore. He and his team care for 50 households that can afford care givers. The service costs about 16 000 rupees a month. “It is extremely difficult for us, however, to find personnel for geriatric care at all,” he says. Raj travels to the farthest outreaches of Karnataka, where unemployment is highest, to find women willing to care for others. Many refuse to wash and care for other people, despite the decent wage of 14 000 rupees a month. In addition, employees get healthcare and one day off a month. He carefully scrutinises clients to try to ensure that families do not abuse care givers. Examples of abuse he gives include not feeding care givers, making them do chores beyond care giving, and treating them poorly. 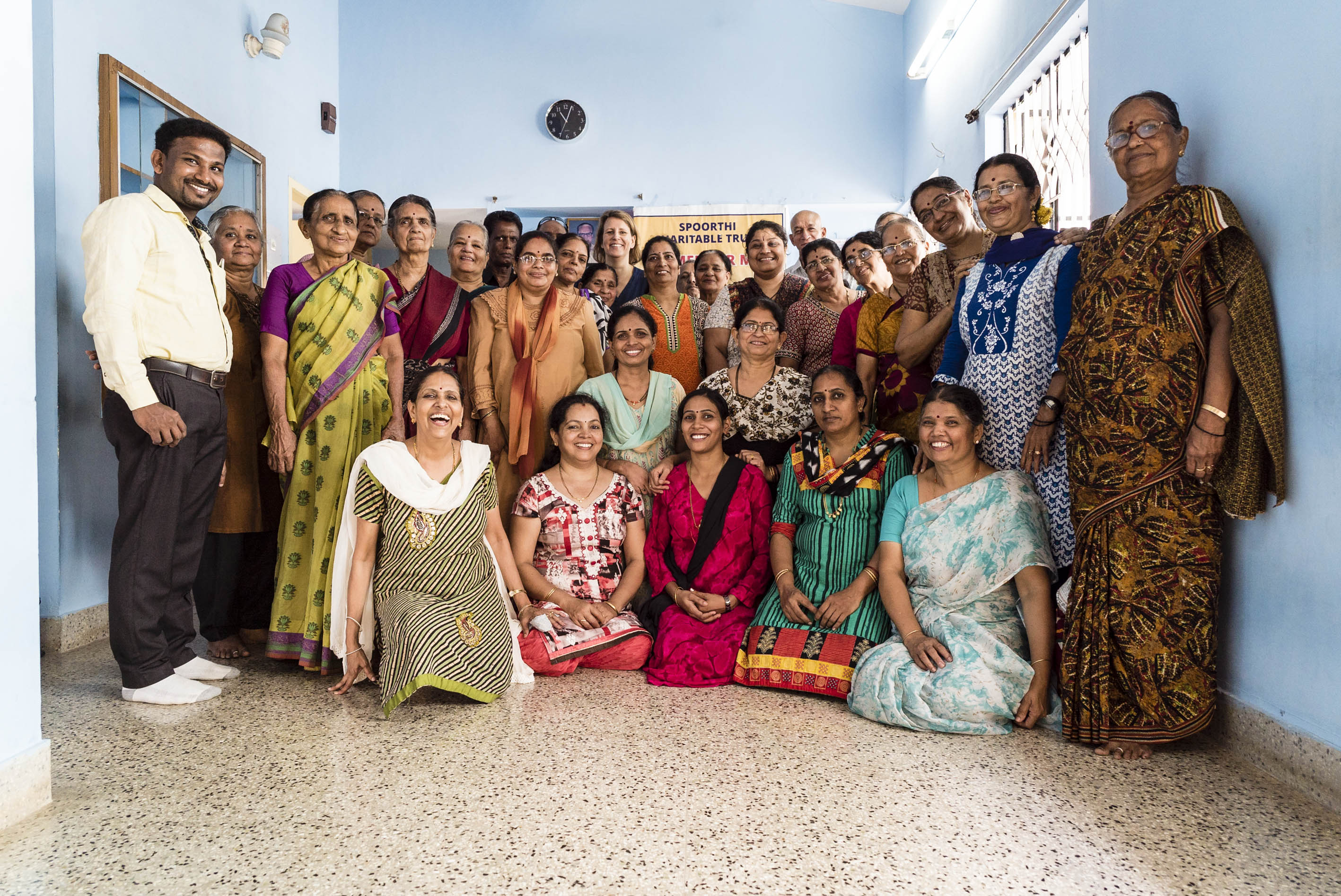 In Abhaya Sadan one nurse is responsible for the eight women. Occasionally, a physician comes. The two dormitories and lounge are sparse. However, the little house exudes friendliness. Some of the women have difficulty walking but, when saying goodbye, everyone wants to stand up for a photograph. At that moment, they look happy.

The forgotten ones: watch the interview videos

This work was supported by the European Journalism Centre and the Bill and Melinda Gates Foundation. See https://health-de.journalismgrants.org/projects/the-impact-of-rising-ncds-on-elderly-and-dementia-care-in-india and www.dementiacareindia.com