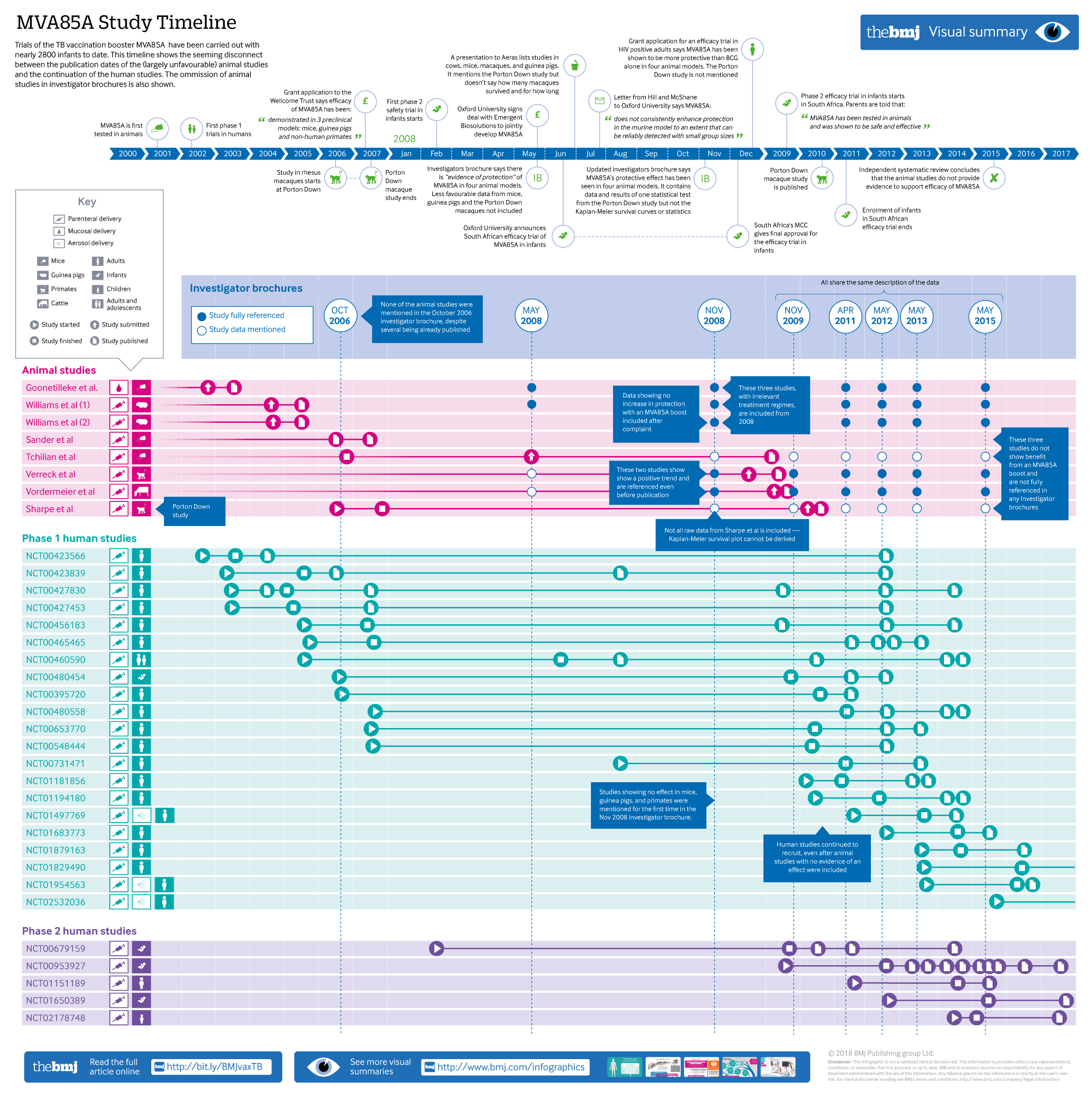 Development of a new tuberculosis vaccine for humans

The article by Cohen[1] questions the justification for a large efficacy trial of the novel tuberculosis (TB) vaccine MVA85A in South African infants[2]. This trial, completed in 2012, confirmed that the vaccine candidate was safe and the data collected provided valuable insights to the TB vaccine research field[3]. While we strongly agree with calls for rigor in conducting, and openness in reporting, preclinical studies, we are confident that moving forward with this efficacy trial was justified. Unfortunately, Cohen’s article fails to distinguish between a lengthy academic disagreement and scientific misconduct.
Buried within the misleading eight-page narrative are three key points:

• There had been 14 clinical trials of MVA85A in over 400 humans (the target species) before the infant efficacy trial. None showed a safety signal. When the University of Cape Town human research ethics committee reviewed the patient information sheet, they judged that the emphasis on human, rather than animal data was appropriate for their approval process.

• Cohen and Beverley persistently imply that data in a non-human primate (NHP) experiment (Sharpe et al) were misrepresented. However, we specifically drew the attention of the regulators to this study and gave them the raw data, as soon as the full dataset was available, eight months before the start of enrolment in the infant trial. They explicitly made the judgement that the results were insufficient to reverse their decision to approve.

• Three separate panels, appointed by Oxford, conducted investigations triggered by Beverley’s complaints, all of which found no evidence of wrong-doing.

Progressing this vaccine to a major field efficacy trial involved the judgement of many people in multiple organisations in several countries. The ultimate measure of those judgements is that the vaccine was found to be safe and advanced the field of vaccination against TB, the world’s leading infectious disease killer. These trial results were published immediately, within 10 working days of our first seeing the data[2,4].

We agree that there is still much important progress to be made in developing more predictive animal models, especially in the field of TB vaccine research. And we cannot make progress without testing new vaccines in humans. Importantly, the MVA85A vaccine was designed to protect through induction of very high T cell responses. Humans show better T cell responses after MVA85A vaccination than animals because we are extensively exposed to, and primed by, environmental mycobacteria, which express the same antigen 85A ]5]. Therefore, this type of vaccine could be more protective in humans than in animal models. This provided a much larger part of the rationale to assess MVA85A in a human efficacy trial than the animal data discussed by Beverley and Cohen.

Beverley’s complaints and the Cohen article fail to cite the positive efficacy demonstrated by a BCG-MVA85A regime in the then standard intra-tracheal challenge model undertaken by a leading Dutch group[6] – the only non-human primate study to evaluate MVA85A in an established challenge model. Indeed, their very selective citation here appears quite different to the policy that the BMJ claims to be encouraging.

The meta-analysis cited[7] combined data from limited numbers of animal studies conducted in four different species, testing different regimes and doses with varying effectiveness, and with three different endpoints. Given the heterogeneity in animal models for TB vaccine evaluation, this flawed approach misses the point that the different conditions and models were seeking to identify a preferred regimen with clear efficacy, not to calculate the average effect across all regimens and models.

We re-emphasize that the main driver for testing the efficacy of MVA85A was the excellent human safety and T cell immunogenicity, which was significantly higher than that induced by any other new candidate vaccine at that time, and seen across 14 clinical trials conducted over seven years in over 400 adults and children in three countries.

To reiterate: we are strongly supportive of calls for greater rigour in conducting, and openness in reporting, pre-clinical findings in vaccinology. However, Cohen fails to recognise the exceptionally thorough reporting of pre-clinical findings on MVA85A and the extensive safety data provided by previous human trials, which justified moving into the phase 2 clinical trial in infants. The MVA85A programme observed the highest scientific and ethical standards, aiming to improve global control of the world’s most lethal infectious disease.

Competing interests: Helen McShane: I am supported by a diverse group of funders, including the Wellcome Trust, The Bill and Melinda Gates Foundation, Aeras and the European Commission, to develop new TB vaccines. MVA85A was developed in my laboratory. Adrian Hill: I am Director of the Jenner Institute, where MVA85A was developed, and have received grant income from a large number of funders for vaccine development, especially against malaria. I am a co-inventor of several vaccine technologies licensed through Oxford University Innovations. Mark Hatherill: I have received support through institutional grants to the University of Cape Town from multiple funders including Aeras and Wellcome Trust for clinical trials of several TB vaccine candidates including MVA85A. Michele Tameris: I have worked on multiple TB vaccine projects funded by Aeras and Wellcome Trust including MVA85A projects. In addition I have previously received two Wellcome Trust International Engagement grants. Jacqui Shea: I was the general manager of the Oxford Emergent TB Consortium, the commercial licensor of the MVA858A vaccine and part funder of the MVA85A trial. I am currently CEO of Aeras, one of the funders and sponsor of the MVA85A trial. Ann Ginsberg: I am currently the Chief Medical Officer for Aeras. Aeras was one of the funders and sponsor of the MVA85A trial.