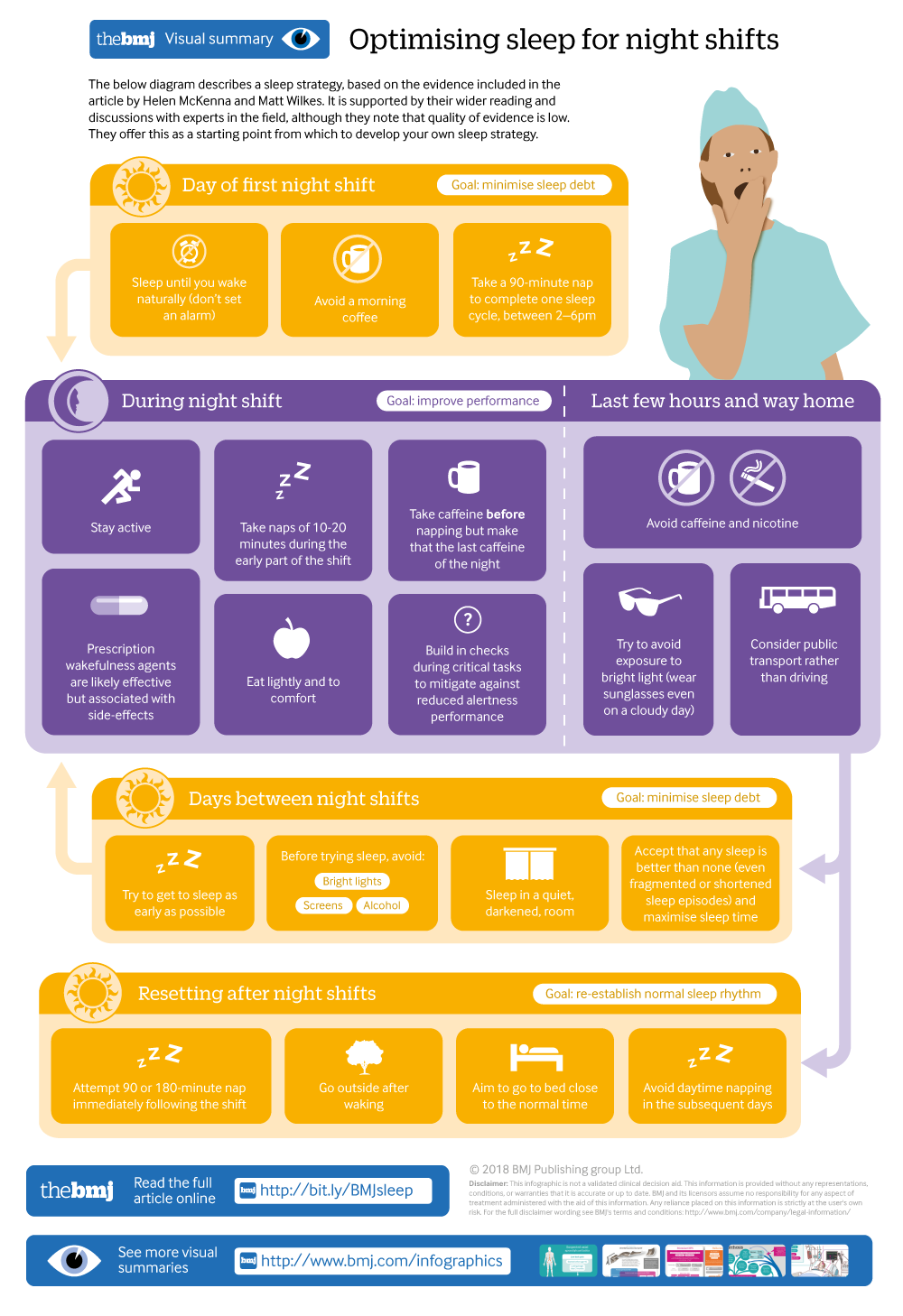 We selected published guidance on sleep and shift work from the National Institute for Health and Care Excellence (NICE) and the Royal Colleges of Physicians and Anaesthetists. We then searched PubMed and Cochrane databases (to May 2017) for observational studies, randomised controlled studies, meta-analyses, and systematic and narrative reviews relating to the health consequences of shift work and for each proposed sleep intervention given in table 1. Priority was given to randomised controlled trials and meta-analyses, but given the interdisciplinary nature of sleep and shift work, and the overall quality of evidence, we also considered observational studies and grey literature from aviation and heavy industries, as well as published expert opinion.

Night shift work occurs during the period of the sleep-wake cycle (“circadian phase”) programmed for sleep. Alertness, cognitive function, psychomotor coordination, and mood all reach their lowest point between 3 and 5 am1 After the shift, workers must rest during the circadian phase least conducive to sleeping,2 which compounds fatigue and can lead to chronic sleep disturbance.3 A recent systematic review linked night shift work with an increased risk of sleep loss, occupational accidents, obesity and weight gain, type 2 diabetes, coronary heart disease, and breast, prostate, and colorectal cancers.4 In a 2017 survey of 2231 UK trainee anaesthetists, more than 70% reported that fatigue affected their physical and psychological wellbeing. Fifty seven per cent described an accident or near-miss travelling home from night shifts.5

Performance on night shift declines with age, and recovery time is extended.67 These are important considerations for hospitals seeking to provide a 24 hour service with consultant cover. The responsibility for maintaining worker health and performance is shared between organisations and workers, but this article aims to provide sleep management skills for the individual.

What evidence is available regarding strategies for workers on night shifts?

Two recent Cochrane reviews of strategies for shift workers highlighted a paucity of adequately powered, well designed, randomised control trials, and yielded mostly low quality evidence.78 Sleep and performance are complex phenomena, difficult to control and measure in practice, and it is unlikely that a single intervention will act as a panacea. Bearing these limitations in mind, the most effective approach to combating the effects of night shift work will most likely be personalised and multimodal. Given the complexity of the problem, we suggest that individuals try to build their own sleep strategies and fine tune the multiple interventions for which there is experimental evidence (ideally randomised controlled trials). Here we present the best evidence from trials and expert opinion.

During the first night shift, the individual experiences both a “homeostatic drive” (the accumulating need for sleep) and a “circadian drive” (the normal sleep-wake cycle) to sleep.1

Sleep duration, timing, and structure vary between individuals: a retrospective study of more than one million people aged 30-102 showed a mode of eight hours sleep (52% slept less than 7.5 hours and 4% less than 6.5 hours per night).10 Individuals also differ in their vulnerability to sleep deprivation.11 Performance is impaired when a person achieves two hours less sleep than required, and performance deteriorates progressively with an accumulating sleep debt.12 Therefore, striving to minimise sleep debt before beginning a set of night shifts would be a logical first step, allowing unrestricted sleep on the morning before the first shift (waking without an alarm) and supplementing sleep time by napping during the afternoon (perhaps taking advantage of the “circadian dip” between 2 and 6 pm, to help initiate daytime sleep). In a randomised control trial of 53 shift workers, a pre-shift nap (followed by caffeine) improved objective and subjective measures of sleepiness during the night shift, compared with controls.13 A laboratory study found that a nap lasting 60-90 minutes allowed completion of both the slow wave and rapid eye movement sleep phases and was associated with cognitive benefits in the laboratory setting, however, this approach is yet to be tested in practice.14

Improving performance while on shift (table 1)

Interventions that might influence sleep and wakefulness in shift workers

A systematic review of 13 small trials of mixed design concluded that napping during a shift improved alertness and performance.15 A meta-analysis of randomised controlled trials, yielded only low quality evidence, however.8 We advise keeping shift naps to less than 30 minutes, to avoid slow wave sleep followed by grogginess on waking, known as “sleep inertia.”16 A systematic review of 12 randomised controlled trials showed that caffeine improved several aspects of cognitive performance, such as orientation, attention, and reasoning, during shift work or jet lag, when compared with placebo.17 Based on the pharmacokinetics of caffeine (peak onset 20-45 minutes after consumption, lasting 3-5 hours),1819 it is advisable to avoid its consumption for at least three hours before anticipated sleep. Doses of 4 mg/kg taken eight hours before intended sleep do not appear to disrupt subsequent sleep.20 There is moderate quality evidence that other stimulant medications such as armodafinil and modafinil are effective, with three randomised controlled trials, including a total of 755 shift workers, finding that these drugs reduced sleepiness during the night shift, compared with placebo.9 However, both drugs have been associated with severe skin reactions, and their long term consequences have not been well established. Theoretically, exposure to bright light during the shift might reduce sleepiness by inhibiting the secretion of the sleep-promoting circadian hormone melatonin, but problems with trial designs have led to inconclusive results.82122 Furthermore, diminished night time levels of melatonin, which also functions as an antioxidant, have been suggested as a cause for increased cancer rates in shift workers.23 Given the limited evidence that such interventions can correct the deficit in night time psychomotor performance, we advocate mitigating risk to patients by building in extra checks during critical tasks, especially towards the physiological nadir in the early hours of the morning.2425

Digestion follows its own circadian rhythm: gastric emptying, motility, liver function, pancreatic activity, and glucose tolerance all decrease during the night.26 This makes timing meals difficult for shift workers: in two small trials of approximately 10 people, those randomised to not eating during a simulated night shift experienced a smaller performance decrement than those who ate.2728 However, not eating was associated with hunger and increased incidence of gastrointestinal upset. From this limited evidence, we suggest eating the main meal immediately before the night shift, then eating just enough to remain comfortable during the shift.

After a night shift, the homeostatic drive to sleep will be opposed by the circadian drive to be awake in the daytime. Phase shifts greater than five hours have been shown to cause dyssynchrony between the circadian rhythms of different organ systems as they adapt to the shift at different rates.29 In a traveller with jet lag, true circadian adaptation is thought to take roughly one day per time zone crossed,30 but the shift worker faces conflicting signals from environmental, light, and social cues during their rest days. Circadian adaptation is impossible during short term rotating shift work. The priority must therefore be to optimise sleep during the days between shifts, to offset the inevitable accumulation of sleep debt.

Several approaches to maximising sleep quality and duration have been advocated by experts in the field under the umbrella term of “sleep hygiene” but, given the variation between individuals31 and the deficiency of randomised controlled trial evidence, there are no recommendations known to work for all. Most strategies are based on eliminating factors that can disrupt sleep. They include avoiding bright daylight on the journey home (wearing sunglasses) and the blue screens on computers and phones32; creating dark, quiet environments for sleep with blackout blinds, eye masks, ear plugs, or white noise generators.33 A relatively cool temperature helps to initiate sleep,34 as does a predictable routine before bed, for example a bath, reading, or gentle stretching.3536 Avoid stimulants such as caffeine or nicotine (because of their pharmacokinetic properties) for at least six hours before trying to sleep.37 There is poor evidence for the benefit of zopiclone or short acting benzodiazepines38 and they are associated with dependence.39 Endogenous melatonin coordinates the circadian rhythms generated by different tissues.40 When taken the morning after a night shift, it can increase sleep duration by up to 24 minutes, based on seven randomised controlled trials and relatively low quality evidence.9

After a set of night shifts, repayment of the sleep debt needs to be balanced with a return to a normal sleep rhythm. One approach to repaying the sleep debt is to take a nap of 90 minutes or 180 minutes (one or two full sleep cycles), and then to realign with daytime sleep cues by going outside into the bright light, socialising, and aiming for bed as near to the usual time as possible, but further work is required to establish whether such an approach is beneficial.293341 A meta-analysis of 66 studies concluded that regular exercise leads to improvement in sleep quantity and quality,42 but the optimum timing, duration, and type of exercise for sleep promotion have yet to be determined.

Based on the available evidence and the authors’ expert opinion, the supplementary infographic shows a suggested sleep strategy.

This article was inspired by the life changing consequences Hunniya Waseem experienced after being involved in a road traffic incident during a set of night shifts in 2005. Hunniya kindly reviewed the final draft for relevance.

See other articles in issue 8143