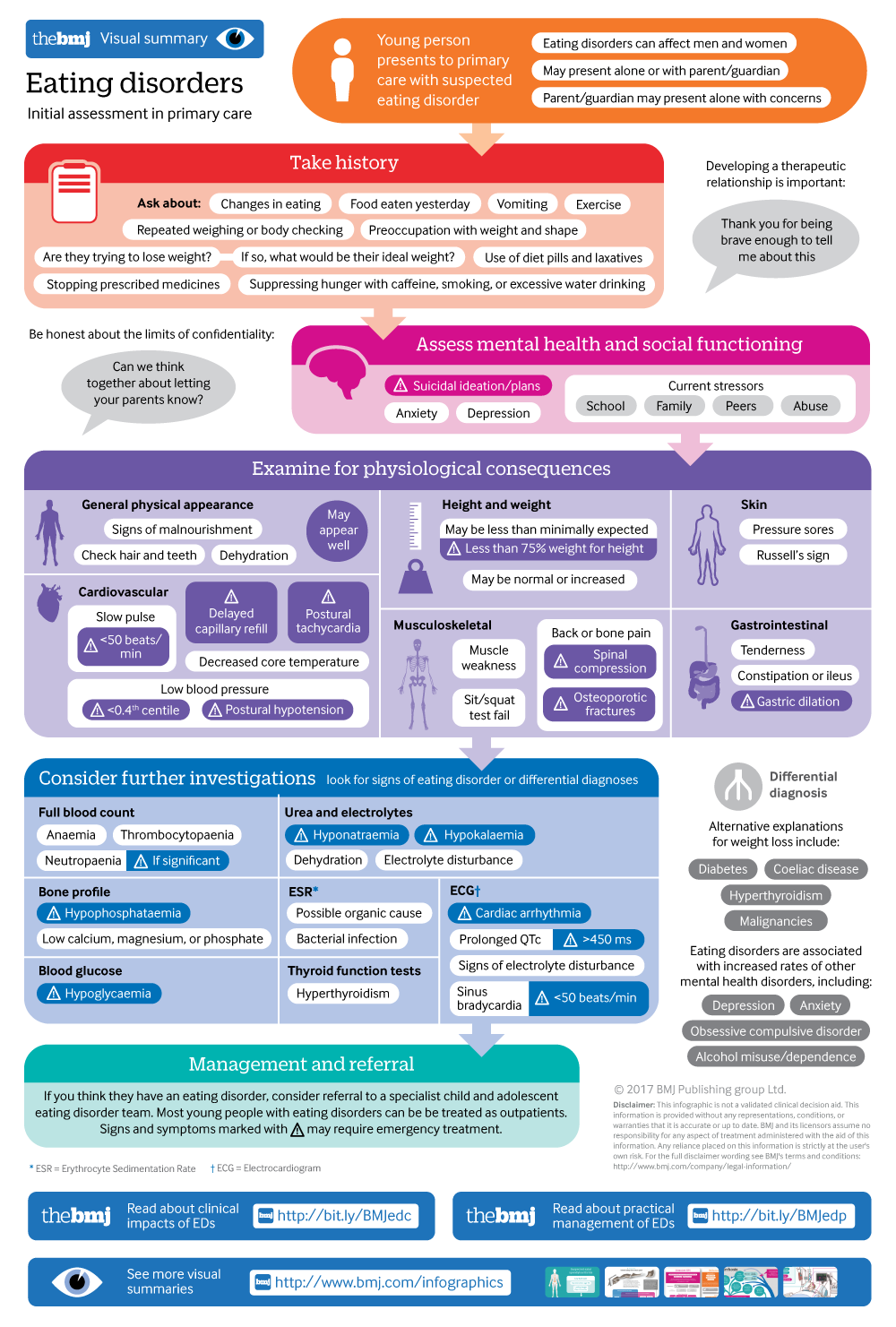 Click here for a visual overview of initial assessment of eating disorders in primary care.

Addison’s disease and primary hyperparathyroidism should be considered in differential diagnosis of eating disorder in children and young people.

Bould and colleagues mentioned diabetes and hyperthyroidism in the differential diagnosis of eating disorders in children and young people (1), but did not include 2 other important endocrine disorders—Addison’s disease and primary hyperparathyroidism. Children and adolescents with Addison’s disease and primary hyperparathyroidism can present with severe weight loss, anorexia, nausea and vomiting, all of which mimic eating disorders (2-4). Serum electrolytes including calcium level must be obtained in pediatric patients with weight loss to ensure that these treatable and potentially life-threatening endocrine conditions are ruled out. . Additionally, morning cortisol and adrenocorticotropic hormone levels should be obtained to evaluate for Addison’s disease.

In reply to Prof Wass and colleagues' response to our article, we would like to thank them for highlighting this important differential. It is another reminder of the importance of a thorough history and examination, and appropriate investigations.

In response to Dr Natt's comment, we agree. We did not mention the use of screening questionnaires as we feel that sensitive history taking, including a collateral history, is likely to be more effective in identifying and engaging young people with eating disorders. The NICE guidance on eating disorders advises that screening tools are not used in isolation, due to insufficient good quality evidence for their use. The SC0FF was designed for use in adults, and has only been tested in that age group.
.

We saw the articles in last week’s BMJ.
Significantly, in the differential diagnosis, they failed to mention Addison’s disease. All three of us have seen patients with Addison’s disease presenting with severe weight loss and two of us have seen patients missed diagnosed with anorexia, one with fatal consequences.
This remains a very important and missed diagnosis with, as above, potentially fatal consequences. This omission should be rectified.
Ref.Addison’s disease, BMJ 2009; 339 doi: https://doi.org/10.1136/bmj.b2385 (Published 02 July 2009). BMJ 2009;339:b2385
Yours faithfully,
John Wass, Professor of Endocrinology, University of Oxford
John Newell-Price, Professor of Endocrinology, University of Sheffield
Wiebke Arlt, Professor of Endocrinology, University of Birmingham

Screening questionnaires and brief interventions may be useful adjuncts to clinical diagnosis and initial management in primary care but were not mentioned in either of the excellent Clinical Update or Practice Pointer articles concerning Eating Disorders. Shortened versions lend themselves particularly to primary care e.g. CAGE. Primary care engagement with adolescents is challenging in itself. Engagement with young possibly eating disordered individuals comes with the additional layers of secrecy and untrustworthiness where eating behaviour is concerned. Primary care physicians acknowledge their uncertainties concerning the best method of enquiry when confronted with such individuals.

The best known shortened screening questionnaire for use by primary care physicians concerning Eating Disorders is SCOFF which is quoted as having almost 100% sensitivity and >87.5% specificity. This sounds impressive until you realise that the initial validation arose from data obtained from responses from the following 2 sets of subjects -

SCOFF validation was not tested against a group of eating disordered individuals as yet undiagnosed who might be predicted to misinform concerning the SCOFF questionnaire in order to conceal their condition and avoid intervention.

Therefore, the sensitivity of SCOFF is flawed, and there is even greater need for a more reliable shortened screening questionnaire for primary care physicians so that eating disordered individuals can achieve earlier recognition and the better outcomes that are associated with earlier effective intervention.