Diagnosis and management of postpartum haemorrhage 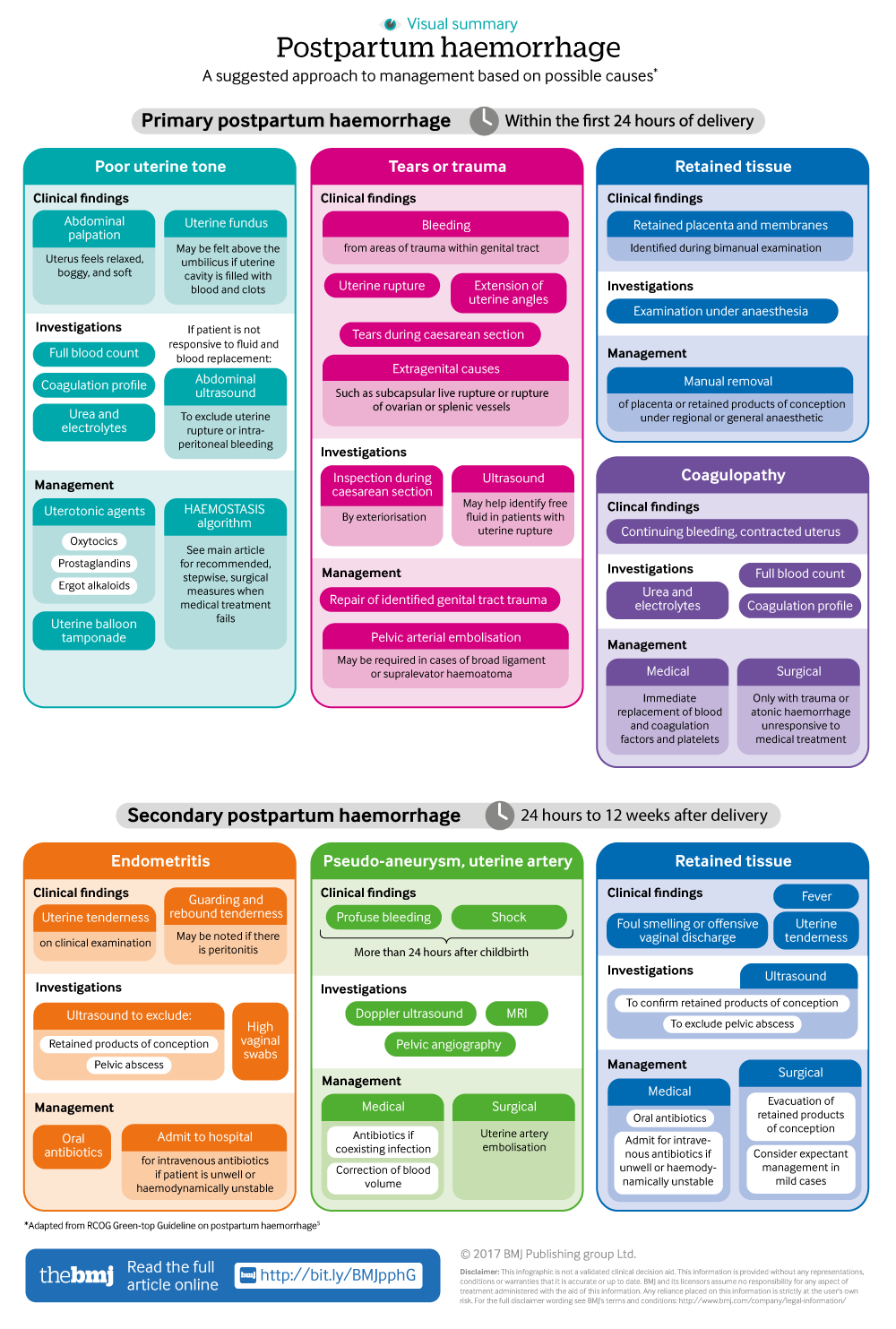 This review highlights the causes, diagnosis, and management of postpartum haemorrhage and is aimed at those involved in obstetric and postnatal care.

We searched PubMed using the key words “postpartum haemorrhage,” “balloon tamponade,” “uterine compression suture,” “embolization,” and “obstetric haemorrhage” from 1981 to 2016. We also considered review articles from 2001 to 2016 including systematic and narrative reviews as well as the most recent Cochrane systematic review on treatment for primary postpartum haemorrhage.21 Priority was given to randomised controlled trials and four large prospective series.

What are the mechanisms of and risk factors for postpartum haemorrhage?

Fig 1 Placenta percreta invading the uterine myometrium and the serosa

It is estimated that over 85% of women who have a vaginal birth will sustain some degree of perineal trauma, and, of these, 60-70% will need to be sutured.6 7 An episiotomy itself can increase the risk of postpartum haemorrhage by up to fivefold.8 Emergency caesarean sections were associated with an approximately threefold increase in postpartum haemorrhage compared with elective caesarean sections or spontaneous vaginal births.9

A population based, cohort nested, case-control study has concluded that, after adjustment for all potential confounders, intrapartum use of oxytocin was associated with a significantly higher risk of severe postpartum haemorrhage (adjusted odds ratio 1.8 (95% confidence interval 1.3 to 2.6)) in women who did not receive prophylactic oxytocin after delivery; the odds ratio for haemorrhage increased from 1 to 5 according to the level of oxytocin exposure.10 It is postulated that this is due to excessive uterine contractions and resultant lactic acidosis in the uterine muscle as well as prolonged labour, when oxytocin is used to augment labour.

How is primary postpartum haemorrhage assessed and diagnosed?

Attempt to identify the cause in women who are bleeding immediately after birth in parallel with resuscitation. The infographic suggests an approach to management adapted from the Royal College of Obstetricians and Gynaecologists Green-top Guideline on postpartum haemorrhage.5

It is important to perform a systematic examination immediately after birth11 so that specific treatments can be instituted (see infographic).

Any delay in achieving haemostasis after birth can result in major loss of maternal blood volume, leading to hypotension, hypoxia, and acidosis. The blood flow to the uterus at term (that is, >37 weeks of gestation) is approximately 1000 mL of blood every minute, and a fetus at term receives about 200 mL/kg/minute from the placenta.12 Estimating the amount of blood that has been actually lost in postpartum haemorrhage visually is prone to error.13

A management algorithm called HAEMOSTASIS has been proposed to aid a systematic and stepwise management of postpartum haemorrhage (box 1),11 and a recent retrospective observational study has suggested that the use of this algorithm has helped improve outcomes and reduced the likelihood of peripartum hysterectomy.16 “HAEMO” refers to the immediate measures to be taken to arrest haemorrhage, while “STASIS” represents the more advanced measures (box 1).

Intra-abdominal bleeding secondary to an extragenital cause such as the rupture of the liver or spleen is uncommon, but may be more likely in women with severe pre-eclampsia due to rupture of the hepatic capsule. If a woman remains unresponsive to treatment or if the amount of visible blood loss is less than the observed haemodynamic instability, we recommend an ultrasound scan to investigate a possible intra-abdominal cause.

How is postpartum haemorrhage managed?

It is important to identify both antepartum and postpartum risk factors that might predispose women to postpartum bleeding—such as placenta praevia, uterine fibroids, and retained placenta—as outlined in the infographic. Planning ahead involves input from a multidisciplinary team to ensure that experienced clinicians are present at the birth and there are suitable blood products available.

Active management of the third stage of labour is the process by which expulsion of the placenta and membranes is achieved after delivery by uterine massage, controlled cord traction, and the use of oxytocin as well as other drugs.

A randomised controlled trial showed that active management of the third stage alone reduces the incidence of primary postpartum haemorrhage by 70% compared with physiological management alone.17 Clinical guidelines on postpartum haemorrhage continue to recommend mechanical methods such as bimanual compression or emptying the urinary bladder based on consensus of professional opinion.5

What drugs are used in the medical management of primary postpartum haemorrhage?

Oxytocin is the most commonly used drug in the medical management of postpartum haemorrhage. Other drugs are listed in box 2.

Although, injectable prostaglandins (prostaglandin F2α and its synthetic analogue carboprost tromethamine) have been used as an adjunct to oxytocin in the management of atonic postpartum haemorrhage, they have not been subjected to any randomised controlled trials. Despite the lack of robust scientific evidence, most clinical guidelines recommend the use of injectable prostaglandins in the management algorithm, up to eight doses 15 minutes apart of 250 μg given intramuscularly.5 Use prostaglandins with caution in patients with bronchial asthma as it is not recommended as an intra-myometrial injection.5

What is the role of a uterine tamponade balloon?

A recent systematic review, which included 241 women, has concluded that the insertion of a uterine tamponade balloon to control bleeding is effective in 97% of cases of postpartum haemorrhage.24 The authors suggested that it would be logical to use this least invasive, easiest, and most rapid approach as the first step in the management of intractable postpartum haemorrhage after the failure of pharmacological treatment.

However, this systematic review did not include any randomised controlled trials and therefore the conclusion should be interpreted with caution.

What are the surgical treatment options for managing primary postpartum haemorrhage?

Some women may need examination under anaesthesia to repair tears or trauma to the genital tract and the uterus, evacuation of retained products, insertion of balloon for tamponade, or drainage of a haematoma.25 Surgery may also be needed in case of bleeding that is not responsive to volume resuscitation and pharmacological treatment.

Some women may need an exploratory laparotomy in order to insert compression sutures and to manage uncommon extra-genital sources of bleeding such as rupture of splenic artery aneurysm.26 27

Women who remain unresponsive to resuscitation despite measures aimed at controlling the ongoing haemorrhage may need a hysterectomy as a lifesaving measure.5 In centres where blood and blood products are not readily available, hysterectomy may be considered earlier to avoid dilutional coagulopathy secondary to the excessive transfusion of intravenous fluids as well as the loss of platelets, fibrinogen, and clotting factors (that is, the “washout phenomenon”).

How is secondary postpartum haemorrhage managed?

As secondary postpartum haemorrhage occurs anytime between 24 hours and 12 weeks after delivery (most commonly between day 7 and day 14), it is important that clinicians working in community health settings are able to diagnose and manage it (see box 3).

What’s new in the management of postpartum haemorrhage?

The international, randomised, double blind, placebo controlled WOMAN trial reported that tranexamic acid reduces death due to bleeding in women with postpartum haemorrhage with no adverse effects.27 This is consistent with the findings in surgery and trauma (CRASH-2 trial).28 Therefore, based on the recent WOMAN trial, tranexamic acid is recommended in the routine management of postpartum haemorrhage unless there are specific contra-indications.

A recent randomised controlled trial (PROPPR trial, 2015) reported that initial infusion with plasma, platelets, and red blood cells in a 1:1:1 ratio did not improve overall survival compared with a 1:1:2 ratio in patients who had had or were at risk of massive blood loss.29 However, in additional analyses, more patients in the 1:1:1 group were reported to achieve “anatomic” haemostasis (objective assessment by the surgeon indicating that bleeding within the surgical field was controlled and no further haemostatic interventions were anticipated), and fewer patients may have died due to exsanguination by 24 hours. A 1:1 transfusion ratio of plasma to red blood cells is recommended, especially if bleeding is not under control.5 In acute emergencies where group-specific cross-matched blood is not readily available, consider O− “un-cross-matched” blood.

Abnormal invasion of the placenta

Abnormal and deep invasion of the placenta into the uterine myometrium (fig 1⇑) is associated with serious maternal morbidity and mortality secondary to massive obstetric haemorrhage.30 It has traditionally been managed with peripartum hysterectomy or intentional retention of placenta. However, a new conservative surgical technique called the triple P procedure has been described31 with good outcomes.32

No patients were involved in the creation of this article.

See other articles in issue 8123