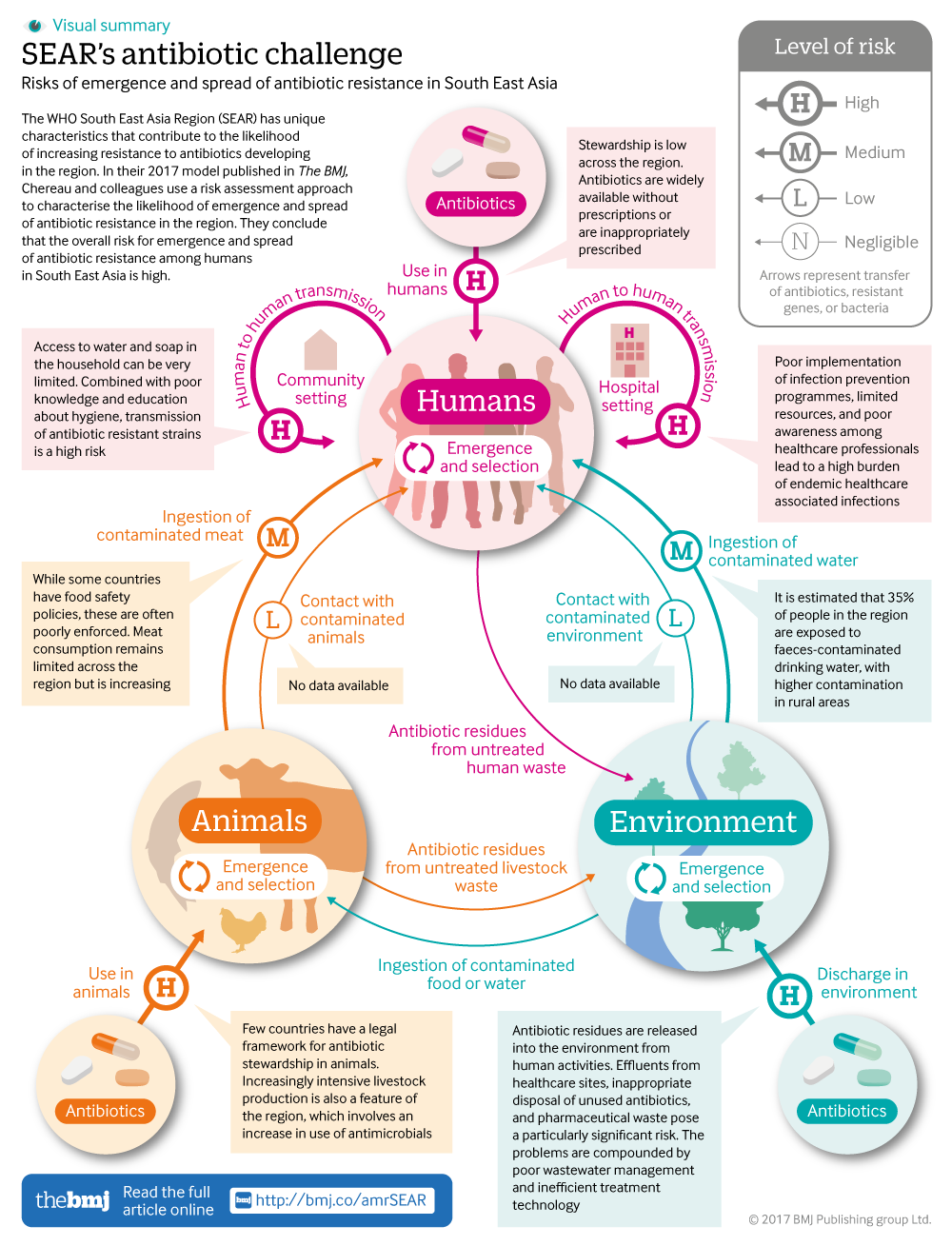 We used the risk assessment approach outlined in box 1 to characterise the level of risk—that is, the likelihood of the emergence and spread of antibiotic resistance among humans—in the WHO South East Asia region. The region includes 11 countries: Bangladesh, Bhutan, Democratic People’s Republic of Korea, India, Indonesia, Maldives, Myanmar, Nepal, Sri Lanka, Thailand, and Timor-Leste.

WHO has identified seven bacteria with high levels of antibiotic resistance (box 2).3 Of these, extended spectrum β-lactamase and carbapenemase producing Enterobacteriaceae and meticillin resistant Staphylococcus aureus (MRSA) are of greatest concern, as infections have high mortality.4 These pathogens are also commensal bacteria in humans and animals (healthy carriage) and in the environment (water and soil). In the South East Asia region healthy carriage of and infections by extended spectrum β-lactamase producers and MRSA are common.3567

Transmission of resistant bacteria and genes to humans is caused by ingestion of contaminated food or water and by direct contact with contaminated animals, soil, or water.813141516 Spread within the human population depends on the capacity for sustained human-to-human transmission. This capacity is still poorly understood.17 In humans, spread of resistance can occur both in the community and in healthcare settings.1819 High levels of antibiotic use, high density of at-risk individuals, and poor hand hygiene in healthcare settings lead to increased transmission of resistant strains from patients or healthcare workers to other patients by direct contact or through contaminated surfaces.112021 The use of antibiotics in the community is thought to be even greater than in healthcare settings and further increases human-to-human transmission of antibiotic resistance.11

MRSA and extended spectrum β-lactamase strains from healthcare settings or community outbreaks often differ from livestock associated strains.22 This could suggest a limited transmission capacity of strains from animal or environmental origin in humans.1723 These species barriers are not well understood, and this lack of knowledge impedes the risk assessment process, particularly about the acquisition of resistant bacterial strains from another reservoir.

We assessed the factors specific to the WHO South East Asia region that could affect the causes of the emergence and transmission of resistant strains. The factors were examined at the policy level (scope of policies and guidelines to contain antibiotic resistance in the region), system level (implementation of policies, healthcare system management, wastewater management, and agriculture and livestock management), and individual level (human behaviour and beliefs).

We gathered information from peer reviewed articles, press articles, published documents from WHO, the Food and Agriculture Organization, and Unicef and from unpublished WHO reports. Because of the lack of data available at the country level, the context assessment considered the region as a whole.

Several context factors in the region increase the risk of acquisition, selection, and spread of antibiotic resistance (table 1⇓). Awareness of the drivers of antibiotic resistance, particularly inappropriate antibiotic use, is low among the public and health professionals in most countries of the region.42 Unregulated antibiotic distribution and poor implementation of antibiotic stewardship programmes in humans 27 lead to overuse and misuse of antibiotics. Wastewater management is inadequate. About 75% of wastewater is not treated in the countries of the region and is directly released into the environment, thus contaminating natural drinking water sources where access to piped or improved water supplies is limited.37 Even when water is treated, the effectiveness of removal of contaminants is limited.33

The lack of antibiotic stewardship programmes results in the inappropriate use of antibiotics in livestock and aquaculture. Furthermore, poor infection control practices in farms lead to the selection and spread of resistant strains.31 Antibiotic use in livestock is expected to rise because of increased production in response to a growing demand for food from animal sources.32 International food safety and quality standards have reduced antibiotic use in animal products intended for export; however, the same is not true for livestock products for domestic consumption. Other regional challenges include the limited ability to detect and measure resistance in the human population. Our recent analysis of national programmes to tackle antimicrobial resistance43 showed limited capacity for microbiology and antibiotic susceptibility testing in most public hospitals in the region; only Thailand has data on the national trends for extended spectrum β-lactamase and carbapenemase producing Enterobacteriaceae. Early diagnosis and active surveillance are lacking thus delaying implementation of infection control measures. Also, efforts to identify animal and environmental reservoirs and to detect antibiotic resistance in the food chain and water systems are limited across the region.31

Risk characterisation for the WHO South East Asia region

To characterise the level of risk of the emergence and spread of antibiotic resistance among humans in the WHO South East Asia region, we integrated the risk assessment findings described above in a two layer model (table 1⇑). The first layer is based on the exposure assessment of reservoirs, transmission routes, and determinants. The second layer considers the context factors in the region.

The risk—that is, likelihood of occurrence of each event (acquisition, selection, transmission of antibiotic resistance)—was rated using a qualitative approach as:

We determined the overall risk of each event occurring in the region by combining the effect of the context factors with the risk from the factors causing the emergence, and spread of antibiotic resistance (fig 1⇑).

For example, we estimated that discharge of antibiotics and antibiotic resistant bacteria and genes into the environment was a moderate risk for selection of resistance and that the low level of wastewater management increased the risk, making it high (fig 1⇑).

This study has some limitations. First, we focused on the pathogens of international concern. The risks of each event cannot be generalised to pathogens not included here. Second, we did not do a systematic review of the literature to quantify risk estimates. The effects of some determinants on the occurrence of specific events are not reported (contribution of antibiotic resistance in the environment to resistance among humans) or are controversial (contribution of antibiotic use in livestock to resistance among humans17). These knowledge gaps hindered our estimates of risk. In view of these gaps, listed in box 3, we considered a higher level of risk when uncertainty was high.

Box 3: Knowledge gaps hindering assessment of the risk of emergence or transmission of antibiotic resistance

Acquisition and selection in humans

Acquisition and selection in livestock

Acquisition and selection in the environment

Transmission in the community

This qualitative risk assessment framework is in the early stages of development. Each step depends on more than one main biological determinant, and all steps and associated determinants need to be defined to develop a systematic risk model—semi-qualitative or quantitative—in the future. With such a model, it might be possible to get accurate estimates of risk and to measure the effectiveness of interventions on defined outcomes.

In conclusion, despite uncertainties, risk assessment models are needed to characterise the level of risk and to identify important interventions to reduce this risk and to reduce knowledge and system gaps while analysing processes and outcomes. We believe such a model with defined parameters will be of interest at the country level to identify system weaknesses, and assess the effect of measures to control antibiotic resistance.