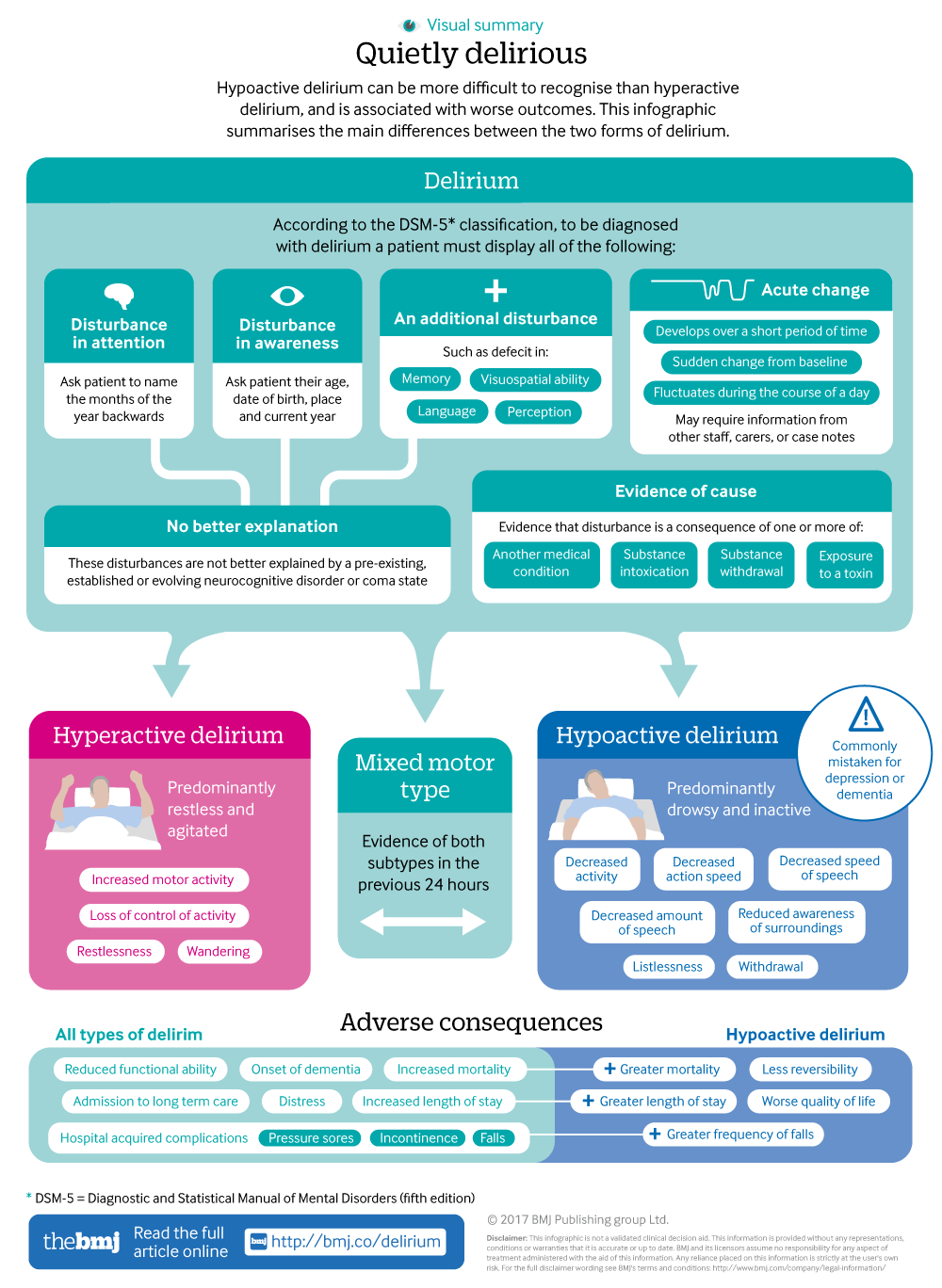 Summarising the main differences between hypo- and hyper- active delirium

Delirium is one of the oldest forms of disorder in Psychopathology and Psychiatry (described by Hippocrates). In the past years there has been a shift from several medical definitions to the definition of a delirium as an organically caused acute confusional state (ICD-10, DSM-IV, and DSM- 5). It`s excellent that the authors described the different categories of behavior with hypoactive, hyperactive or mixed subtypes and the different core features of delirium, because delirium is a common yet underdiagnosed syndrome of acute brain dysfunction; the prevalence increases with age especially among hospitalized elderly persons. The understanding of the underlying pathophysiologic mechanisms remains limited. Delirium is not a disease, but a set of symptoms.

I think the authors should add exactly these underlying diseases - for example alcohol dependence and the withdrawal complications, drugs administered during treatment of a disease or withdrawal from drugs. Sometimes it`s complicated to differentiate, especially with benzodiazepines (paradox reaction, intoxication or withdrawal). Benzodiazepines themselves can cause delirium or worsen it. However, if delirium is due to benzodiazepine withdrawal there are other consequences. In addition, the authors should mention that an unexplained delirium can be associated with an autoimmune encephalitis [1] (diffuse or localized as in limbic, brainstem, or basal ganglia) or with anticholinergic drug-induced problems [2]. Drug-induced delirium is a common matter in the elderly, and anticholinergics, together with a number of different drugs, may significantly contribute to the delirium onset, especially in demented people.

The treatment for delirium with medications depends on its cause; therapy should be initiated promptly. For example: the specific treatment options of autoimmune encephalitis are corticosteroids. Reversible acetylcholinesterase inhibitor agents such as physostigmine can be used as an antidote in life-threatening cases of an anticholinergic delirium.

Antipsychotics, particularly haloperidol, are the most commonly used drugs for delirium and the most studied. Evidence is weaker for the atypical antipsychotics, but their use is controversial. British guidelines by the “National Institute for Health and Clinical Excellence” advise 2010 haloperidol or olanzapine [3]. In an updated meta-analysis of antipsychotic treatment in patients with delirium [4] the authors identified 15 studies for the systematic review (total n=949 patients, amisulpride=20, aripiprazole=8, chlorpromazine=13, haloperidol=316, intramuscular olanzapine or haloperidol injection=62, olanzapine=144, quetiapine=125, risperidone=124 and ziprasidone=32). Pooled second-generation antipsychotics were associated with shorter time to response (SMD=-0.27) and a lower incidence of extrapyramidal symptoms (RR risk ratio: 0.31, number-needed-to-treat/harm :7) compared with haloperidol. The evidence related to the effectiveness of haloperidol prophylaxis in critically ill patients with a high risk of delirium is contradictory [5]. However, balancing the benefits and low side effects associated with haloperidol prophylaxis, this preventive intervention may be useful to reduce the incidence of delirium in critically ill adults in intensive care units. One important point in advising haloperidol is the low risk of pharmacodynamics or pharmacokinetic interactions with other drugs.

Thiamine treatment is indicated in malnourished patients, such as patients with an alcohol addiction associated with a thiamine deficiency, which can cause disorders including Wernicke's encephalopathy and Korsakoff's psychosis.