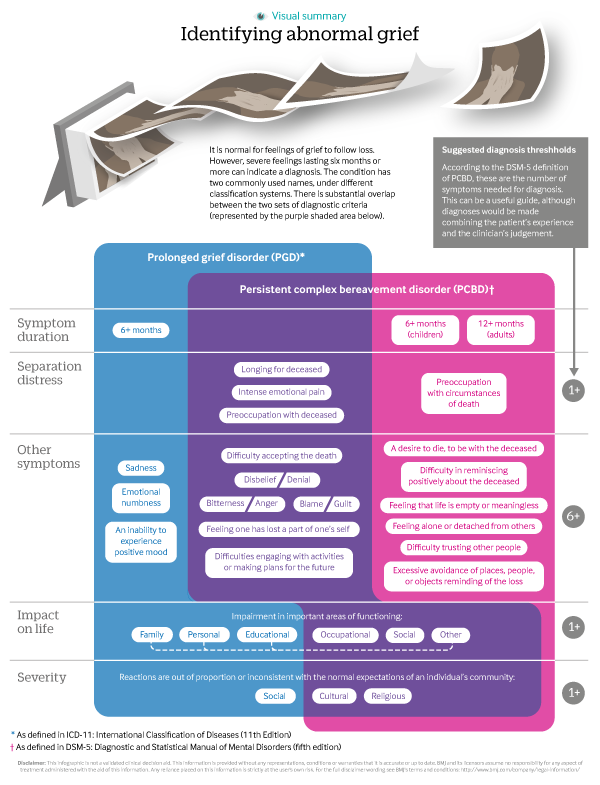 Click here for a visual overview of symptoms that can indicate abnormal grief.

We applaud the publication of a recent article [1] that highlights the need for awareness of a clinically significant and treatable syndrome of protracted acute grief. However, as grief researchers with extensive clinical experience, we are concerned about important omissions related to diagnosis and treatment of this condition. We highlight four main concerns.

First, this article overlooks important information about diagnostic criteria development. Diagnostic criteria must identify individuals with persistent clinically significant grief and be informed by existing scientific evidence. The current evidence base for persistent impairing grief includes a large body of data supporting proposed criteria for a syndrome called Complicated Grief (CG) that was overlooked by Boelen and Smid. CG criteria were empirically derived from a large and diverse clinical sample [2], informed by clinical experience [3] and validated using a psychometrically sound instrument [4] in both a community [5] and an independent clinical sample [6]. Taken together data from 3,364 individuals across 6 studies were used to develop and test CG criteria (Table 1). It is puzzling that Boelen and Smid ignore this systematic empirical work and limit their discussion to criteria for PCBD that have never been studied and are still provisional, Prigerson criteria [7] that were validated only in the same small sample from which the criteria were derived and ICD-11 Diagnostic Guidance which is in draft form [8].

DSM-style criteria require specified numbers of symptoms. ICD Clinical Descriptions and Diagnostic Guidelines as referenced in the BMJ Practice Pointers article [8] are very different. ICD does not require a specified number of symptoms but rather provides “diagnostic guidance that is sufficiently flexible to allow for cultural variation and clinical judgment”[10]. A recent study ignored this fundamental intention[9] and altered the ICD Guidelines [8] to include a specified number of symptoms in order to match proposed Prigerson criteria. Based upon this manipulation Boelen and Smid assert that Prigerson criteria and ICD-11 PGD are interchangeable. In fact, they are not.

Third, it is critical to point out that as currently configured, Prigerson and PCBD criteria perform poorly and fail to identify nearly half of bereaved individuals who seek treatment for persistent intense grief [11-13]. Notably this large subset that Prigerson and/or PCBD criteria fail to diagnose were judged on clinical interview to have persistent impairing grief and/or endorsed clinically significant scores on grief symptom and impairment measures [5, 6]. Further, they showed a robust treatment response (unpublished data) to our targeted complicated grief treatment. The limited sample used to develop and test the Prigerson criteria, almost all of which were bereaved of partners who died of illness, may explain the lack of generalizability of these criteria.

Our fourth concern about the Boelen and Smid article is that it underreports data supporting treatment efficacy. The authors fail to accurately present our clinical trials of Complicated Grief Treatment (CGT) which include a total of 641 randomized participants in three separate studies each funded by the National Institute of Mental Health [11-13]. These studies showed an average 70% response rate compared to 30% response to Interpersonal Psychotherapy (a very stringent psychotherapy control) and 55% for placebo medication with grief support. Boelen and Smid’s underestimation of the strength of efficacy data supporting psychological treatment may have been influenced by the puzzling omission of one CGT study with 151 randomized participants [12] and by inaccurate reporting of the main outcome for another [11]. Other researchers in the US [14] and Japan [15],[S Nakajima personal communication] have replicated our positive outcomes as have a multitude of clinicians who have attended our workshops and used our treatment manual in practice. Moreover, each controlled treatment study listed in table 2 of Boelen and Smid article uses a grief–targeted approach very similar to CGT. Thus, the statement “There are still relatively few controlled studies examining psychological treatments for PGD” is somewhat misleading. Given the strong and consistent results of multiple trials from different laboratories around the world we believe there is now solid evidence that a targeted psychotherapy approach is the treatment of choice for people with persistent acute grief, whether it is called PGD, PCBD or CG.

In summary, while we applaud the authors and editors of the Practice Pointers article for bringing this prevalent and disabling condition to the attention of clinicians, we consider it of the utmost importance to utilize all available data in presenting the current status of diagnostic criteria and in describing evidence based treatment options. The extensive body of Complicated Grief diagnosis and treatment research must be represented alongside the work of Boelen, Smid, Prigerson and others who have contributed to the field. Validated diagnostic criteria and proven efficacious treatments exist and there is a pressing need for clinicians to be well informed about how to best recognize and treat people with persistent impairing grief.

I read with great interest your article on prolonged grief disorder.

I was however greatly surprised that no mention was made of religious beliefs in the management of grief and loss.

I have found that as a GP relatives and patients frequently present to me greatly distressed by a loss.

I most often enquire in a sensitive manner as to whether they have any religious beliefs.

If they do I signpost them to a priest, vicar , rabbi or imam and/or to reading sacred texts. So often the patient seems uplifted by my response.

I would urge discreet and sensitive enquiry into religious beliefs when dealing with a patient who has suffered a great loss.

Walsh et al published an interesting article in the BMJ in 2002 showing that spiritual beliefs could affect bereavement.

I would argue that patients suffering loss or grief should be offered spiritual as well as psychological support.

Re: Disturbed grief: prolonged grief disorder may present in back pain clinics

The helpful review by Boelen and Smid [1] is welcome. When elderly women titled ‘Mrs’ presented to the back pain clinic alone – the following discussion often took place as part of the personal history prior to questions relating to their presenting symptom in my back pain clinic:-
Q. I notice you are alone today – can’t your husband come with you?
Often the answer was: I’m afraid I lost my husband.
Q. Oh dear – when was that?
Often the answer was: over two years ago now!
Q. I’m sorry to hear that – are you beginning to put the bits and pieces of life together again?
There were two answers usually given:
Answer 1. Of course – there are the grandchildren to think about – life has to go on! [firm voice]
Answer 2. Of course not – we shared the same bed together for xx years... [weepy voice and tears].
This group would often admit to daily tearfulness suggesting that counselling and anti depressive therapy might be helpful.
Occasionally one received a surprising answer – I’m glad he’s dead – he was a b.....!
All that information was elicited prior to investigating the back pain – reinforcing the importance of the personal history at the beginning of the consultation. This anecdote supports Boelen and Smid’s view that prolonged grief disorder may present to any clinician [1].

But thy eternal summer shall not fade (Shakespeare Sonnet18)

Grieving is bittersweet. At first, we are overwhelmed with the shock and bitterness of losing a loved one. But after a while, after the shock starts to wear off, we begin to reminisce about the sweetness that we shared with our loved one. Still later, after the bitterness and sweetness begin to recede, we start analyzing our relationship with our loved one, and come to new insights. Since the grieving process is lengthy and complex, but productive, we should give ourselves ample time to go through the whole process and come out a better person.