How productive are NHS consultants?

On paper at least, the productivity of consultants is falling. But is this because the quality of their work is increasing? John Appleby investigates

On the face of it, measuring the productivity of the workers in an industry or business is straightforward. The ONS Productivity Handbook defines productivity as simply the volume of output per unit of input.1 Inputs (the number of workers) may increase over time, but if the outputs (widgets) increase at a faster rate then productivity will have increased. On this basis, have NHS hospital consultants been producing less, the same, or more widgets over the past few years?

It turns out that dividing one number (outputs) by another (inputs) to get a third (productivity) is somewhat harder in practice than the arithmetic implies.

Over the past seven years, the good news is that as consultant numbers have increased, so too has their elective activity (fig 1⇓). The English NHS increased its elective activity output by around 19% from September 2009 to September 2016.2 But the bad news is that at the same time, the consultant workforce grew by around 22%.3 This means that the average productivity per consultant has fallen by 3% since 2009 (fig 2⇓). 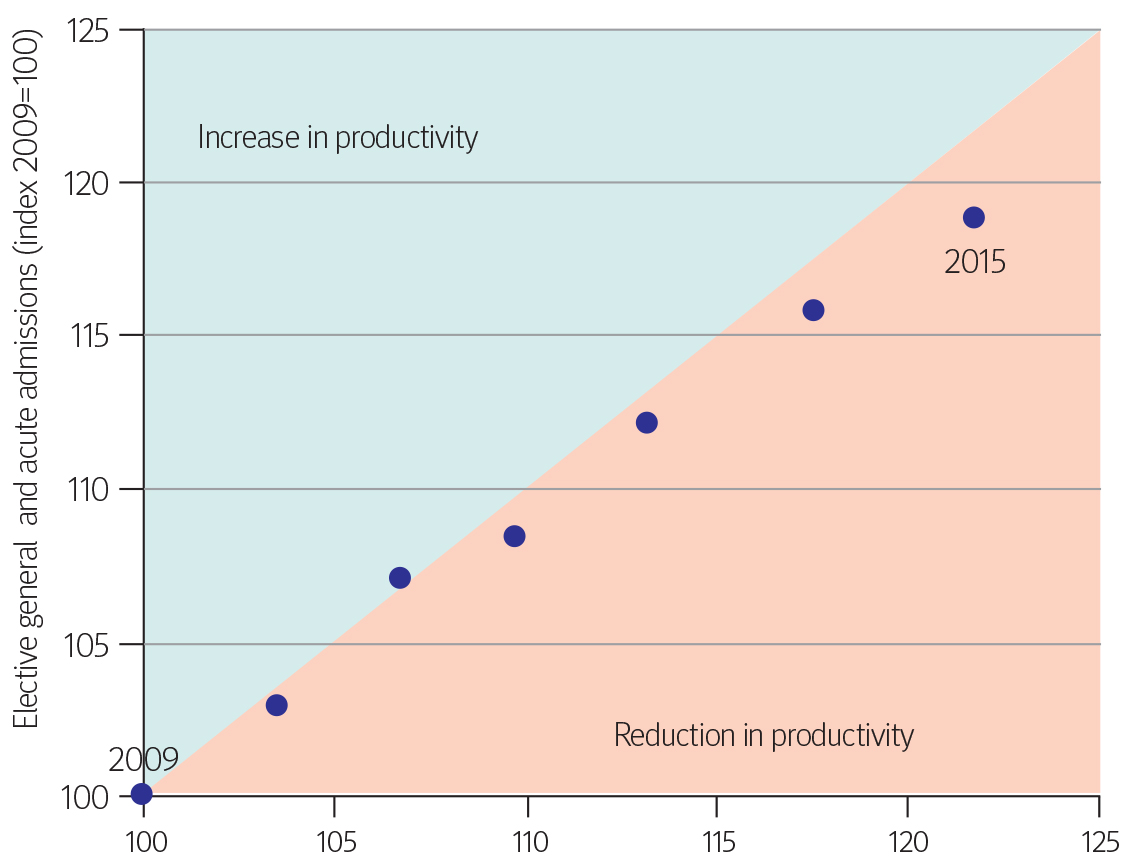 Fig 1 More consultants and more work since 2009 but less productivity?23 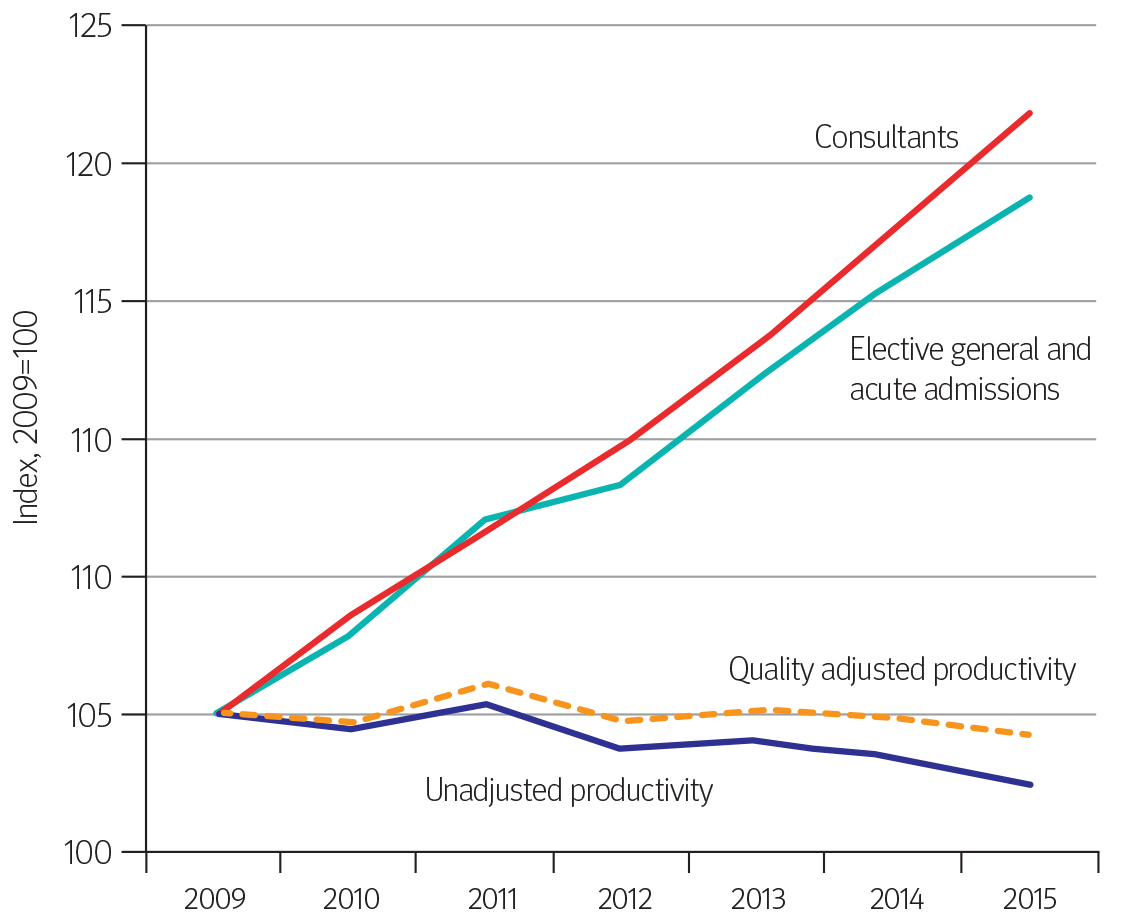 But here’s the first problem with this calculation: consultants’ output is not just measured in elective activity but includes outpatient attendances and emergency work. Although consultants will also spend their time in meetings, management, and other administrative duties, these are assumed to be intermediate activities that contribute to their final output. But what about teaching and research? What to include in the overall output measure is not always clear. And though there are ways to aggregate the apples and pears of different types of activity into one overall measure of output (weighting them by the proportion of their total spend for example), this presumes their importance or value is related to their cost.

There is a second and rather fundamental problem, which is not just specific to a publicly funded NHS or, indeed, to healthcare but which exists for virtually all industries, public, or private.

The problem is how to ensure outputs are comparable over time. For producers of mobile phones we can count the number of phones produced every year and call that their output. But it’s clear that, although still a phone, Apple’s 2016 iPhone 7 is somewhat different to Nokia’s 1997 6110 mobile (though both cost around the same). Over two decades the power and capabilities of mobile phones have increased hugely. The 2016 mobile phone product is not the same as its 1997 counterpart.

And the same is true for healthcare. The attributes that patients’ value in the things consultants’ produce (operations, attendances, etc) have changed over time, mainly for the better—from time spent waiting to get treatment and experience of care, to the probabilities of experiencing complications and the change in health status as a result of treatment.

Adjusting the output of consultants to reflect changes in the quality of the “product” is not easy, but without it productivity can be seriously underestimated over time. For the NHS as a whole, Office for National Statistics adjustments for quality (improved waiting times, reductions in mortality, etc) have accounted for around 40% of the increase in the productivity of the NHS since 2000 and about 17% between 2009 and 2014 (fig 3⇓).4 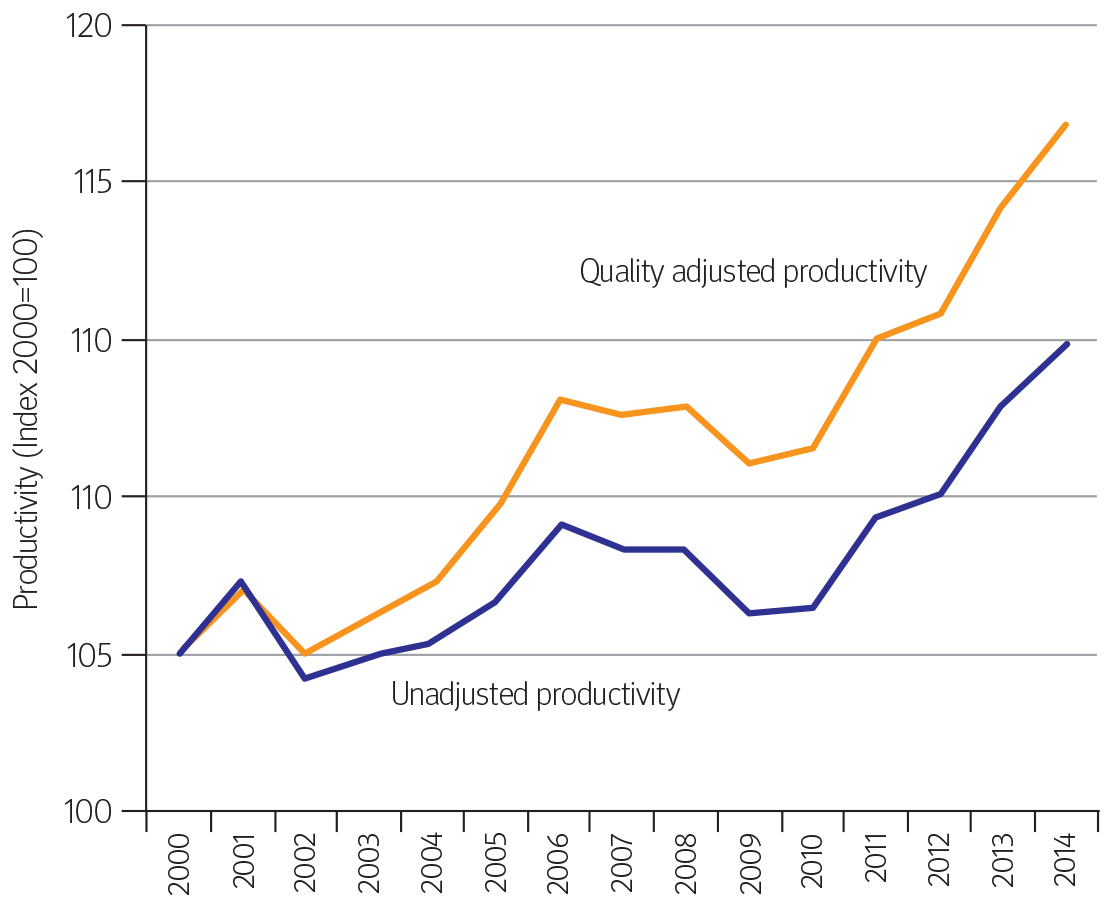 If such an addition, assuming the quality increase in 2015 was the same as in 2014, was applied to the elective outputs of consultants, it would have been enough to have just about compensated for the 3% fall in unadjusted productivity between 2009 and 2015 (fig 2⇑).