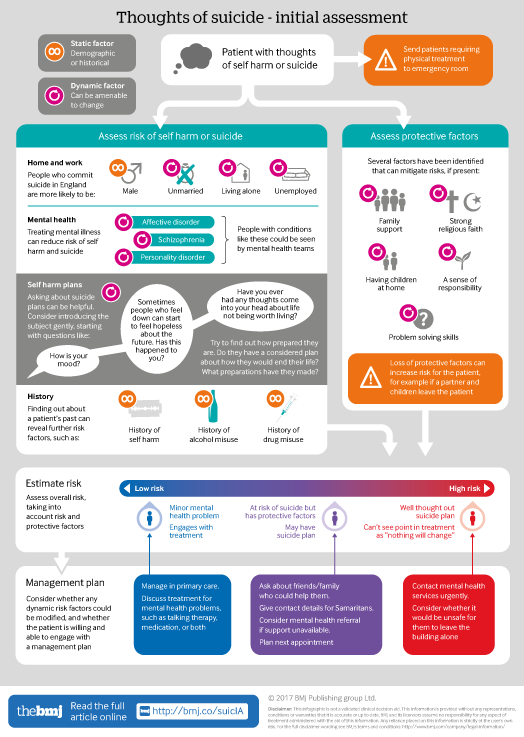 Click here for a visual overview of initial assessment for patients having suicidal thoughts. Includes risk and protective factors that need to be balanced to determine a patient's overall risk of suicide.

A 50 year old man describes feeling low in mood. He has recently lost his job and his wife has left him. During the consultation he mentions that life is not worth living any more. Dr Smith is worried about how to follow up on this comment; the patient is making poor eye contact.

Many doctors worry about how best to assess suicide risk in individuals who present to them with thoughts of self harm.

The topic of suicide is difficult to research and consequently much of the evidence is of low quality. In a recent qualitative study, general practitioners in the UK reported that they found it difficult to identify who was “really” suicidal, to effectively assess risk, and to manage patients at risk of suicide.1 Patients who repeatedly self harm can evoke powerful emotions in the healthcare provider, such as anger, fear, or a desire to save them.2

Clinicians should not fear asking about suicide; a review article failed to identify any studies in which asking about suicidal ideation increased the risk of a further attempt.3 This article suggest how to asses someone who has thoughts of ending their life, perform a risk assessment, and decide who might benefit from additional input from a specialist mental health team.

How common are suicidal thoughts and suicide attempts?

Suicide itself is a rare event. In 2014 there were 10.8 deaths by suicide per 100 000 of the population in the UK.4 Between 3.5% and 5% of people reported suicidal thoughts in the last year, but only 0.5%-0.7% of individuals made an attempt to end their life, according to UK and US data.5 6 The UK study found that over the course of a lifetime up to one fifth of the general population reported thoughts of ending their life.6

How can doctors distinguish those at high risk of suicide?

A recent meta-analysis of studies that looked at risk factors for self harm as well as suicide found only four with strong evidence to support them:

These factors are so common, however, that they are unlikely to help clinical decision making.

Possibly of more clinical use is the UK National Confidential Inquiry into suicides. This report, which covers 20 years of data in England, identified characteristics in individuals who died by suicide (table 1⇓).8 The data confirm the four risk factors, but add

Are there risk factors that you can change?

Most practising psychiatrists divide risk factors into dynamic and static or stable.12 Static risk factors are not amenable to change and tend to be demographic (for example, gender or having a history of self harm). Dynamic risk factors, on the other hand, can vary and might be amenable to change. For example, someone would be at higher risk if their depression were untreated, compared with a person who had been adequately treated such that their mood had returned to normal. Other dynamic risk factors include access to methods of self harm (such as a weapon), disinhibition due to intoxication, substance misuse, living alone, unemployment, relationship problems, and difficulties with problem solving.2 Considering which risk factors could be amenable to change can help with designing a management plan.13 Weighing up all of these factors can be complex, however, and efforts to produce algorithms to predict risk based on risk factors have not been successful.

Are there protective factors?

Protective factors can reduce the risk of someone dying by suicide.13 Examples include2

What can clinicians observe and feel?

Pay attention to how the patient behaves and what emotions they project onto you, as this can aid in diagnosis and the assessment of risk. For example, patients who are very depressed can evoke feelings of boredom in the clinician or a sense that they are undeserving. Patients who are withdrawn, agitated, or simply very hopeless, can be at high risk.

Be alert to any mismatch between what patients report and your clinical instinct. In a small US case series, three quarters of patients who died by suicide denied suicidal thoughts at their last clinical contact.14 Clinicians should use their judgment as to whether their patients are withholding such information.

How could I explore thoughts of suicide?

In those reporting thoughts of ending their life, and as part of the overall assessment for mental health problems, explore these thoughts of self harm further. There is little guidance or evidence on how best to do this; the suggestions below are based on our practice and that observed by others.

Exploring thoughts of self harm is perhaps best done once a rapport has been established. Consider introducing the subject of suicide gently, rather than asking directly “do you want to die?” Consider framing it in terms of “some people find…,” which can help to put patients at ease. For example:

Talking about suicide can be upsetting, so you should work back down to less emotive subjects, such as support available to the patient, before drawing a consultation to a close.

What decisions do I need to make?

Use the information you have gathered to form a more accurate judgment of the risk of harm. Go back to gather any further information and ask specific questions if needed. The infographic that accompanies this article is based on guidance formed by expert opinion.2

Key issues to address include a judgment on

How do I generate a management plan?

The management plan will be driven by the assessment of risk and also by the local services available.2 15

Irrespective of which doctor or clinical team cares for the patient, or whether the patient will lead with self care, it might be helpful to touch on the following areas when forming a management plan for patients with thoughts of ending their life:

Table 2⇓ shows a worked example of a hypothetical case seen in UK primary care, based on the assessment structure outlined in the accompanying infographic. Possible sources of advice for patients and carers are given in the box. It is important to work with patients and carers to identify a management plan that they agree with.

Advice for patients and carers

A national charity that provides confidential emotional support 24/7 for those feeling distressed or unable to cope. Tel: 116 123, http://www.samaritans.org/

A Bristol based charity which runs a part time national support line for women and provides text based support for those aged under 24. Their website also has a comprehensive list of other UK based self harm charities and support services. http://www.selfinjurysupport.org.uk/

This website provides a forum where individuals who self harm can receive support from others in a similar situation. http://nshn.co.uk/

A website offering information and advice on self harm. https://www.selfharm.co.uk/

A helpful leaflet on self harm. http://www.rcpsych.ac.uk/healthadvice/problemsdisorders/self-harm.aspx

We are very grateful to the Swindon Service User Forum and to the Swindon Survivors of Bereavement by Suicide groups for their comments on a draft version of this article. They were keen to stress the need for sensitivity when asking patients about thoughts of harming themselves.

We searched the National Institute for Health and Care Excellence, American Psychiatric Association, and the Royal College of Psychiatrists websites for relevant guidelines. We searched PubMed using the search terms suicide+ guideline, suicide risk assessment + guideline, suicidal ideation, suicide attempted, self-harm, self-harm + risk assessment. Abstracts and titles were reviewed for relevance. Some of the articles were already known to us from our routine clinical work.