Low back pain and sciatica: summary of NICE guidance 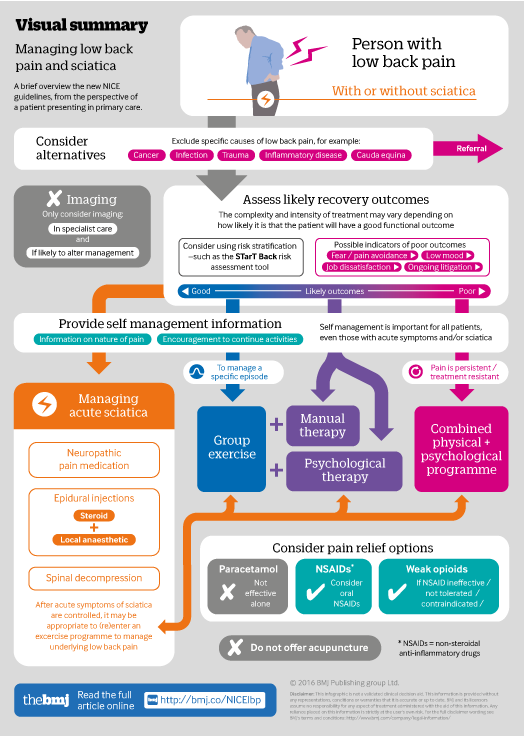 Click here for a visual overview of assessment and management for those with low back pain and/or sciatica.

The recommendations in the NICE guidelines around acupuncture are perfectly divorced from what the GDG’s evidence showed. The methods used and the criteria applied were inconsistent from the pre-stated methods and inconsistently applied across treatments, throwing the entire guideline into question. A few things to note:

1) Not a single treatment recommended in the guidelines met the criteria used to assess and ultimately recommend against acupuncture, suggesting poor application of guideline development principles. The decision to focus on outcomes comparing acupuncture to sham needling in lieu of outcomes comparing acupuncture to usual care contradicts NICE's pre-stated methods for how to develop guidelines as well as a letter written by Professor Mark Baker, Director of the Centre for Clinical Practice at NICE, who said that in developing this guideline the GDG would 'focus on effectiveness rather than efficacy.' (Letter from Mark Baker 17 July 2015). All other non-pharmaceutical treatments were judged based on their effectiveness compared to usual care.

2) For pain reduction, acupuncture’s effect size over usual care, which includes pharmaceutical analgesia, was -1.61 [-2.23, -0.99]. Not only is this a clinically significant reduction in pain as compared to usual care and pharmaceutical analgesia, but this effect was larger than any treatment recommended in the usual care comparison, making acupuncture the most effective non-pharmaceutical treatment evaluated by the GDG for this outcome. Acupuncture showed similar effectiveness for function and psychological distress.

3) According to the GDG's data, acupuncture was significantly more effective than sham needling, contradicting the contention that its effectiveness is mediated solely through non-specific factors.

For pain reduction, acupuncture had a statistically significant benefit over sham needling in the short and long-term (the only treatment evaluated to do so). The effect sizes of -0.80 [-1.29,-0.32] and -0.67 [-1.08,-0.27] respectively did not meet the GDG’s definition of ‘clinical significance.’ However, the comparison of acupuncture needling versus sham acupuncture needling has zero clinical relevance, as sham needling is a physiologically active comparator and is not a placebo control.(Birch, Alraek, Kim, & Lee, 2016) In any case, doctors and patients aren’t choosing between acupuncture and sham needling; they are choosing between acupuncture and usual care and there the data very clearly demonstrates acupuncture’s effectiveness.

Additionally, the effect size of acupuncture vs sham for responder criteria (50% reduction in pain) was 2.62 [1.59, 4.32], which is substantial. While the difference in average pain reduction between acupuncture and sham needling may be smaller (but still significant), the percentage of patients gaining meaningful reduction in their pain was far larger in the acupuncture group compared to sham needling.

4) Acupuncture also outperformed sham needling in reducing the use of pain medication, a very important outcome for NICE to consider. For this comparison, after treatment a course of treatment, patients who received acupuncture were taking painkillers less than half as often as those is the sham needling arm (on average, 2.62 fewer days on analgesia). This measure becomes particularly relevant when you consider that pain reduction data from this trial was used in the acupuncture vs sham needling comparison, which doesn’t take into account the fact that the sham arm was on far more pain medication than the acupuncture arm. It's safe to assume that had the two groups required identical amounts of pharmaceutical analgesia, the difference in pain scores between the two groups would have been even larger.

The GDG’s recommendation to not offer acupuncture is simply not supported by their data and was only possible by significantly deviating from NICE's handbook on guideline development. The recommendation is unethical as it denies patients access to a safe and effective treatment for low back pain and does a great disservice to patients, GPs and the NHS as a whole.

Competing interests: The Acupuncture Now Foundation is a non-profit organisation dedicated to elevating acupuncture’s role in easing suffering through educating healthcare policy makers and the public about its evidence and best practices.