Girls taking part in a scheme that aims to reduce teenage pregnancies by getting teenagers to look after an electronic doll that cries when it needs feeding or changing were more likely to become pregnant than those not involved in the scheme, a randomised study has found.1

Schemes to tackle teenage pregnancy must look beyond this purported “magic doll,” one commentator has said, and must target girls and boys in infancy rather than adolescents.

Programmes using infant simulators are increasingly used in high income countries to try to reduce teenage pregnancies and are spreading to lower income countries. But, despite their growing popularity, no evidence had been published on their long term effect.

The new study, reported in the Lancet, randomly assigned 57 (86%) of 66 eligible schools in Western Australia to the Virtual Infant Parenting programme or to standard health education. The programme was given to girls aged 13-15 and included educational sessions, a workbook, watching a documentary of teenage mothers talking about their experiences, and caring for an infant simulator over one weekend. The doll cried when it needed to be fed, burped, rocked, or changed and recorded information on crying time, mishandling, the number of changes, and general care. Researchers followed up all participants until age 20 by looking at hospital and abortion clinic records.

Results showed that girls enrolled in the baby simulator programme had higher rates of pregnancy and abortion than the control group. Just under one in 10 (8%; 97/1267) taking part in the programme had at least one birth, compared with 4% (67/1567) in the control group. Similarly, 9% (113/1267) of girls in the intervention group had an abortion, compared with 6% (101/1567) of those receiving standard health education.

Analysis showed that girls taking part in the infant simulator programme had a significantly higher overall chance of pregnancy than those given standard health education, after adjusting for potential confounders (relative risk 1.36 (95% confidence interval 1.10 to 1.67); P=0.003).

Sally Brinkman, lead author of the study, from the Telethon Kids Institute based in Perth, Western Australia, said that similar programmes were increasingly being offered around the world. “These interventions are likely to be an ineffective use of public resources for pregnancy prevention,” she concluded.

Considering why the baby simulator programme may not have worked, Julie Quinlivan, of the University of Notre Dame Australia in Fremantle, wrote in a linked editorial,2 “The cure for teenage pregnancy is more difficult than a magic doll. We have to address both mothers and fathers. Programmes need to start in infancy.

“Investment in vulnerable children is needed to entice these adolescents from the path of premature parenthood into brighter futures. We cannot afford the quick fix, especially when it doesn’t work.” 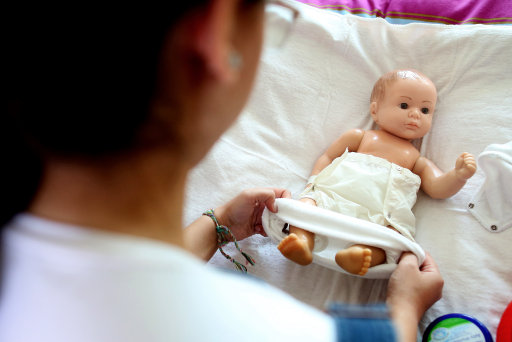