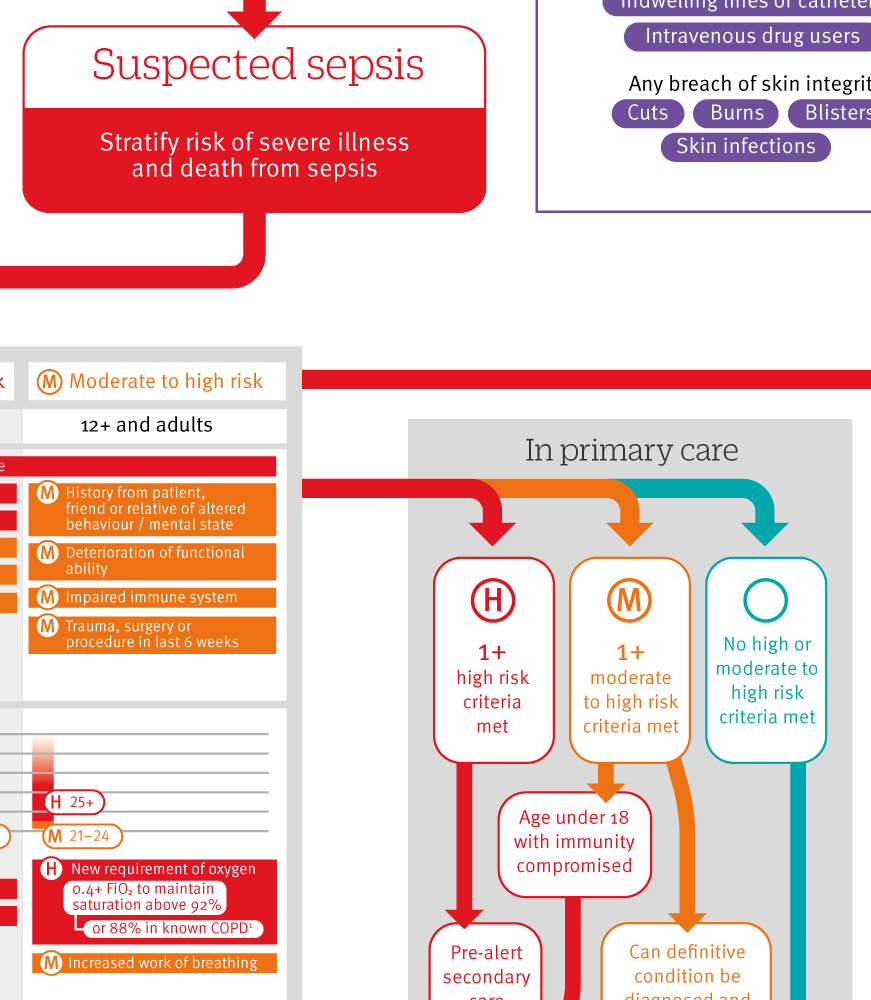 The UK Parliamentary and Health Service Ombudsman inquiry “Time to Act” found failures in the recognition, diagnosis, and early management of those who died from sepsis,1 which triggered this guidance. In sepsis the body’s immune and coagulation systems are switched on by an infection and cause one or more body organs to malfunction with variable severity. The condition is life threatening. Although most people with infection do not have and will not develop sepsis, non-specific signs and symptoms can lead to late recognition of people who might have sepsis. We would like clinicians to “think sepsis” and recognise symptoms and signs of potential organ failure when they assess someone with infection, in a similar way to thinking “Could this chest pain be cardiac in origin?”

This guidance provides a pragmatic approach for patients with infection who are assessed in the community, emergency departments, and hospitals by a wide range of general and specialist healthcare professionals. It includes guidance on assessment of risk factors followed by a detailed structured assessment of potential clinical signs and symptoms of concern.

Definitions of sepsis have been developed,2 but these offer limited explanation on how to confirm or rule out the diagnosis in general clinical settings or in the community.3 Current mechanisms to diagnose sepsis and guidelines for use largely apply to critical care settings such as intensive care.2 We recognised a need for better recognition of sepsis in non-intensive settings and for the diagnosis to be entertained sooner.

While sepsis is multifactorial and rarely presents in the same way, the Guideline Development Group considered that use of an easy, structured risk assessment may help clinicians identify those most severely ill who require immediate potentially lifesaving treatment. This guideline ensures that patients defined as having sepsis by recent definitions are, as a minimum, assessed as moderate-high risk.2 This guidance is also about appropriate de-escalation if sepsis is unlikely and broad spectrum antibiotics or hospital admission are not appropriate.

This article summarises recommendations from the National Institute for Health and Care Excellence (NICE) guideline for the recognition, diagnosis, and management of sepsis in children and adults.4 Recommendations and the clinical pathway are available via the NICE website, and the UK Sepsis Trust tools are being revised to align with this guidance.5 This article is accompanied by an infographic, which displays the NICE guideline as a decision making tool.

Box 1: Factors that increase the risk of sepsis

The GDG found evidence of low quality and used this as the starting point for their recommendations. If a person has infection and there is clinical concern that he or she might have sepsis, perform a structured assessment using the history and physical examination to grade risk of severe illness or death from sepsis (see infographic).

The management pathway depends on setting, patient’s age, and outcome of the structured assessment. Again, the evidence base was generally of low quality.

Outside hospital, people with a low risk of illness or death following structured assessment can be managed in a community setting and should not be referred to hospital. People with moderate to high risk may be managed outside acute hospital settings depending on clinical assessment. All those with high risk of illness or death from suspected sepsis should be referred to hospital.

In acute hospital settings, the recommendations are similar. For people at highest risk of illness or death from suspected sepsis, a senior doctor or nurse should review the patient immediately. They may make an alternative diagnosis and avoid the inappropriate use of broad spectrum antibiotics.

Those classified as having a high risk of sepsis require antibiotics and fluids and potentially other supportive care. Treatment must be delivered in a timely fashion and may require specialist and critical care input. Use point of care lactate testing to guide fluid therapy and potential involvement of critical care.

If a definitive condition or infection cannot be identified, structured reassessment should be repeated. The management of suspected sepsis without any high or moderate to high risk criteria should be based on clinical judgment.

As part of the initial assessment, look for a source of infection, including sources that might need surgical drainage. Target testing according to history and examination—for example, urine analysis for those with suspected urinary tract sepsis. Imaging of the abdomen and pelvis should be considered if no likely source is identified after clinical examination and initial tests. [Based on knowledge of the epidemiology of causes, and the experience and opinion of the GDG]

Lay members joined the committee to form the recommendations summarised here. Patient organisations including the UK Sepsis Trust, MRSA Action UK, Group B Strep Support, Fiona Elizabeth Agnew Trust, and Meningitis Research Foundation were among the registered stakeholders that were consulted at both scoping and development stages.

Their involvement shaped the scope of the guideline and questions to be asked, and two lay members were full members of the committee. The UK Sepsis Trust has produced clinical tools to aid guideline implementation.

The guideline was developed using standard National Institute for Health and Care Excellence (NICE) guideline methodology (www.nice.org.uk/article/pmg20/chapter/1%20introduction%20and%20overview). The GDG developed clinical questions, collected and appraised clinical evidence, and evaluated the cost effectiveness of proposed interventions and management strategies through literature review and economic considerations where possible. Quality ratings of the evidence were based on GRADE methodology (www.gradeworkinggroup.org). These relate to the quality of the available evidence for assessed outcomes rather than the quality of the clinical study. Where standard methods could not be applied, a customised quality assessment was done.

Limited evidence exists for identification and early management of sepsis in primary care or the emergency department, and only some of the critical care evidence was relevant or interpretable in a meaningful way for non-critical care settings.