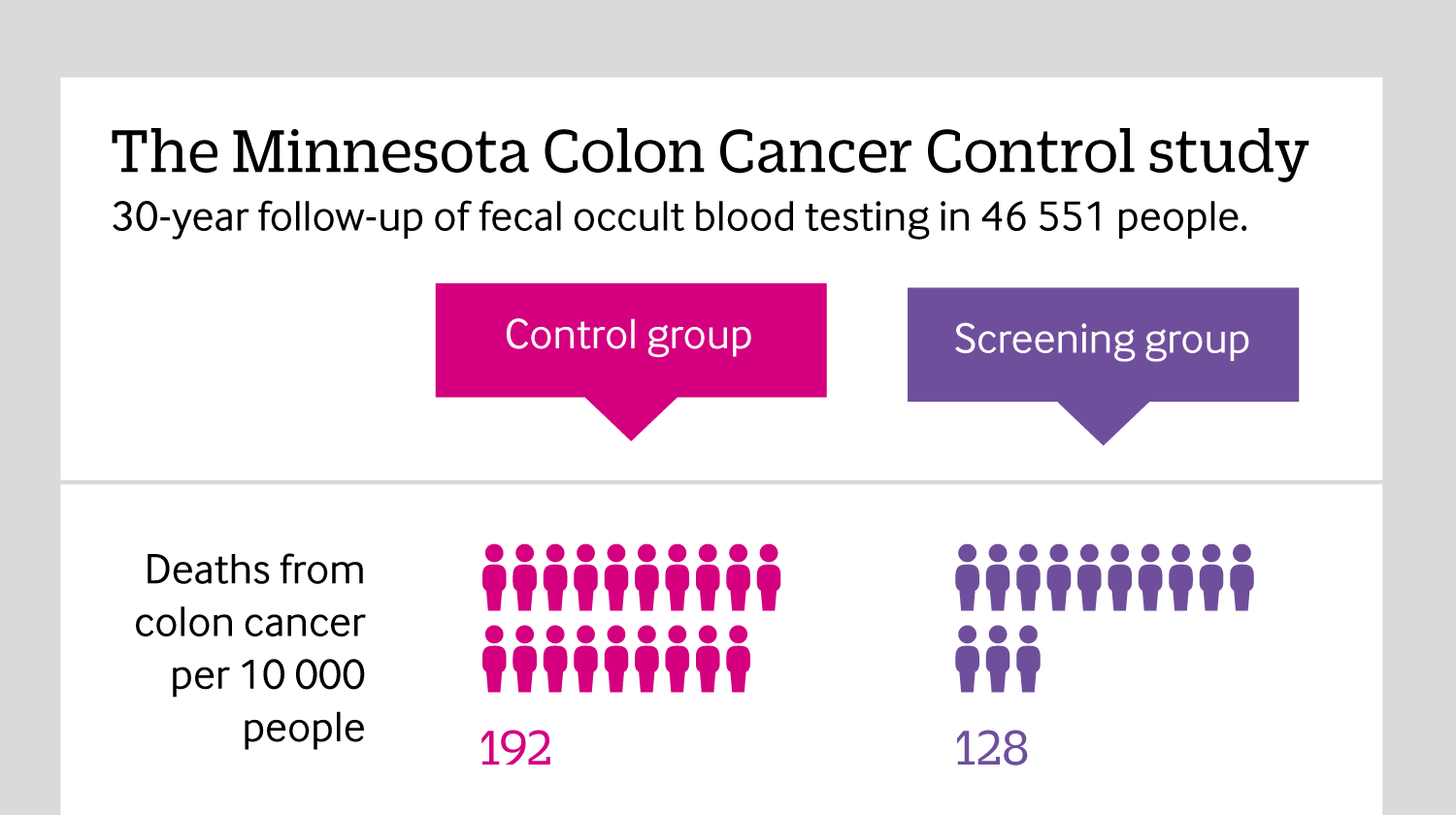 Including all mortality
Click here to see an infographic, explaining why reporting all causes of mortality in cancer screening trials is so important.

The claim that cancer screening saves lives is based on fewer deaths due to the target cancer. Vinay Prasad and colleagues argue that reductions in overall mortality should be the benchmark and call for higher standards of evidence for cancer screening

Despite growing appreciation of the harms of cancer screening,1 2 3 advocates still claim that it “saves lives.”4 This assertion rests, however, on reductions in disease specific mortality rather than overall mortality.

Using disease specific mortality as a proxy for overall mortality deprives people of information about their chief concern: reducing their risk of dying.5 6 Although some people may have personal reasons for wanting to avoid a specific diagnosis, the burden falls on providers to provide clear information about both disease specific and overall mortality and to ensure that the overall goal of healthcare—to improve quantity and quality of life—is not undermined.7

In this article we argue that overall mortality should be the benchmark against which screening is judged and discuss how to improve the evidence upon which screening rests.

Underpowered studies lead to uncertainty and assumptions of benefit rather than scientific evidence of benefit. In the 30 year follow-up of the Minnesota Colon Cancer Control Study, which assessed annual fecal occult blood testing, there were 128 deaths from colon cancer per 10 000 participants in the screened group and 192 per 10 000 in the control arm—a statistically significant difference of 64 deaths per 10 000.10 But there was a difference of only two overall deaths between the screened arm (7111 deaths per 10 000) and the control arm (7109 deaths per 10 000; P=0.97). Hazard ratios and Kaplan Meier curves corroborate this finding of no mortality difference. For 80% power to detect a difference in overall mortality of 64 deaths per 10 000 (assuming the disease specific benefit was not offset by other deaths), the trial would have needed to be about five times as large.

However, meta-analyses of fecal occult blood testing have shown a slight increase in deaths unrelated to colorectal cancer associated with screening, which implies that downstream effects of screening may partially or wholly negate any disease specific gains.11

Such “off-target deaths” are particularly likely among screening tests associated with false positive results, overdiagnosis of non-harmful cancers, and detection of incidental findings. For example, prostate specific antigen (PSA) testing yields numerous false positive results, which contribute to over one million prostate biopsies a year.12 Prostate biopsies are associated with serious harms, including admission to hospital and death.12 13 Moreover, men diagnosed with prostate cancer are more likely to have a heart attack or commit suicide in the year after diagnosis14 or to die of complications of treatment for cancers that may never have caused symptoms.12 13

The overall effect of cancer screening on mortality is more complex than a disease specific endpoint can capture, owing to the harms of further testing, overdiagnosis, and overtreatment. Realisation of this has led to reversal or abandonment of a number of screening campaigns, including chest radiography screening for lung cancer, urine testing for neuroblastoma, and PSA for prostate cancer.6 15 16 17 18 Screening for lung cancer and neuroblastoma increased diagnoses and harms without decreasing disease specific mortality. PSA screening increased harms without changing overall mortality; disease specific mortality remains debated.

Arguably the strongest evidence that a single screening test can save lives comes from the National Lung Cancer Screening Trial (NLST), which randomised 53 454 heavy smokers to receive either low dose computed tomography (CT) or chest radiography. CT was widely reported to show a 20% relative reduction in lung cancer deaths and a 6.7% relative reduction in overall mortality.19 However, the absolute risk reduction in overall mortality was only 0.46%, and several limitations undermine even this narrow margin.

Firstly, chest radiography for lung screening is not standard of care—it is well known not to improve disease specific or overall mortality.20 Limited evidence shows that screening with chest radiography may even increase lung cancer mortality,21 22 but this may be due to the sticky diagnosis bias, in which some deaths are wrongly attributed to the detected cancer.23 A more appropriate comparator would have been no screening (routine care). When CT screening was compared with routine care in the Danish Lung Cancer Screening Trial (n=4104) there was a trend towards higher mortality in the screened group (61 deaths, 2.97%) compared with the control group (42 deaths, 2.05%; P=0.059).24

Thirdly, the benefit in lung cancer mortality of CT screening (estimated to avert over 12 000 lung cancer deaths in the US annually25) must be set against the 27 034 major complications (such as lung collapse, heart attack, stroke, and death) that follow a positive screening test (NLST investigators, personal communication, 2015).19

Finally, NLST may be anomalous, as a systematic review of 60 000 participants in randomised trials found that those who underwent CT scanning did not live longer than those in control groups.26

A systematic review has shown that the public has an inflated sense of the benefits and discounted sense of the harms of mammography screening, the cervical smear test, and PSA screening.27 In one study 68% of women thought that mammography would lower their risk of getting breast cancer, 62% thought that screening at least halved the rate of breast cancer, and 75% thought that 10 years of screening would prevent 10 breast cancer deaths per 1000 women.28 Even the most optimistic estimates of screening do not approach these numbers. The most recent Cochrane review of randomised controlled trials of PSA screening failed to show a reduction in disease specific death.29 The Cochrane review of mammography did not show reduced breast cancer deaths when adequately randomised trials were analysed.30

Advocates of screening have emphasised its benefits, sometimes verging on fear mongering.31 Others, including us, think that shared decision making should be the focus.32 33 But as long as we are unsure of the mortality benefits of screening we cannot provide people with the information they need to make an informed choice. We must be honest about this uncertainty.

Consideration of harms becomes more important in the absence of clear overall mortality benefit. Empirical analyses show that primary screening studies pay little attention to the harms of screening—of 57 studies only 7% quantified overdiagnosis and just 4% reported the rate of false positive results.35 When researchers do examine the harms of screening the results are typically sobering.

Overdiagnosis affected 18% of people diagnosed with lung cancer on low dose CT in the NLST,39 and researchers have found that as many as one in three diagnoses of invasive breast cancer (or one in two for invasive cancer and carcinoma in situ) by mammography constitute overdiagnosis.40 These numbers are broadly equivalent to those found with most major screening tests.41

How can we know whether screening saves lives? We need trials that are ten times larger and powered for overall mortality.5 6 Researchers have postulated, based on a colorectal cancer trial, that 4.1 million participants would be needed to demonstrate a reduction in overall death, compared with 150 000 for disease specific death.42

Studies of this size may be estimated to cost upwards of $1bn (£0.7bn; €0.9bn), but conducting such trials in large national observational registries would dramatically reduce the cost. One registry based randomised controlled trial was conducted for just $50 per participant,43 making the cost of a trial with 4 million participants comparable to the cost of current screening trials.44 Large trials should be pragmatic, with inclusion criteria that mirror the real world population in which the intervention is used. We agree with the proposal that the safest way to introduce or change screening programmes at the national level is by incorporating randomisation.45

Such trials are worth the expense compared with the continued cost of supporting widespread screening campaigns without knowing whether they truly benefit society.5 The cost of adopting CT screening for lung cancer by the Medicare population has been estimated to surpass $6bn a year.46

To reduce costs, trials could target just the highest risk groups, with successful results prompting trials in lower risk groups. For example, the potential benefits of CT screening for lung cancer vary by age and smoking history of the participant.47

Screening trials could also ascertain all causes of death among all participants to monitor any increase in off target deaths.42 This would be an improvement over current standards, but it would not overcome most of the concerns we have identified. Primary study data should be made available in a usable format for re-analysis.48 49 50

Political will, financial resources, and public perception are common hurdles in building support for resource intensive scientific endeavours, and developing consensus on these matters will take time and effort. Population data indicate that some cancer screening programmes may be associated with disease specific mortality reductions.41 No randomised controlled trials have been conducted to show that cervical cancer screening reduces overall mortality, but epidemiological trends are consistent with (though not proof of) benefit.51 Similarly, trends suggestive of concurrent disease specific and overall mortality benefits have been reported for sigmoidoscopy.52

Population based trends of disease specific mortality for prostate and breast cancer, and whether they are associated with screening, are less clear.41 53 Increased detection of early breast cancer has not led to a proportionate decline in advanced disease.53 Given the narrow confidence intervals for difference in overall survival in meta-analyses of prostate cancer it is unlikely that current screening practices can show benefit. Thus, investments of time and money might be better focused on novel prostate screening strategies.54

We encourage healthcare providers to be frank about the limitations of screening—the harms of screening are certain, but the benefits in overall mortality are not. Declining screening may be a reasonable and prudent choice for many people. Providers should also encourage participation in open studies.

We call for higher standards of evidence, not to satisfy an esoteric standard, but to enable rational, shared decision making between doctors and patients. As Otis Brawley, chief scientific and medical officer of the American Cancer Society, often states: “We must be honest about what we know, what we don’t know, and what we simply believe.”

PDF34 responses
Email to a friend