General practice commissioning: in whose interests? 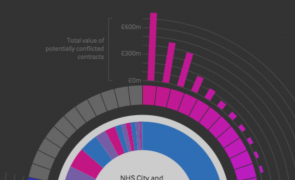 Potential conflicts
Click here to see an interactive graphic, showing all conflicts highlighted by the investigation.

An investigation into England’s clinical commissioning groups shows that many are commissioning from organisations in which board members are involved, Gareth Iacobucci reports

Clinical commissioning groups (CCGs) in England have awarded hundreds of contracts worth at least £2.4bn (€3.4bn; $3.7bn) to organisations in which their board members have a financial interest, a joint investigation by The BMJ and The Times has found.

This new analysis shows the extent to which CCG boards have become conflicted under the health reforms introduced in 2012, which handed general practitioners control of around two thirds of the NHS’s total budget.

The data have reignited calls to ban GPs who are directors of provider organisations from holding board positions on CCGs that could commission them. NHS England has ordered an audit of how CCGs are managing conflicts of interest. Patient representatives, MPs, and doctors’ leaders are also concerned that governance standards are too lax in some areas. NHS England’s current rules allow CCGs the freedom to determine whether conflicted CCG board members should be excluded from relevant parts of meetings or join in discussions but not participate in decision making when commissioning services.1

This guidance was described by the head of the BMA’s GP committee as “too permissive.”The BMJ and The Times examined contracts awarded by a sample of 151 of England’s 209 CCGs between April 2013, when CCGs went live, and July 2015. These were cross referenced with the registered interests of board members that CCGs are required to maintain and keep up to date.

We identified 50 CCGs that have awarded contracts where a conflict was present, with a total of 437 out of 5671 contracts awarded to healthcare providers in which one or more CCG board members had declared an interest. Most of the money went to NHS trusts or other similar organisations providing a range of acute, community, and mental health services (£2.2bn gained from a total of 116 contracts awarded with a conflict present).

Social enterprises were the next highest earners from contracts awarded with a conflict of interest present (£64.6m from 13 contracts), followed by limited companies, (£16.6m from 36 contracts), large commercial companies (£16.6m from four contracts), and confederations or cooperatives (£10.4m from 15 contracts). These contracts ranged from large deals to run general practice out of hours services to small contracts for community based service.

The findings follow a previous investigation by The BMJ in April 2013 which found that more than a third of GPs on the boards of CCGs had a conflict of interest resulting from directorships or shares held in private companies.2

CCGs and NHS England acknowledged that conflicts of interest were inevitable in a system that made GPs both purchasers and providers of services but insisted that all decisions were backed by strong governance processes and probity.

But this investigation identified wide variations in how CCGs handled conflicts of interest and their willingness to provide information on how conflicts were handled when awarding contracts. Some CCGs asked board members to leave the room when a conflict occurred, while others permitted conflicted members to participate in discussions but not vote. Often the course of action was at the discretion of the CCG chair (box).

CCG conflicts and how they are being handled

How conflicts are managed

How conflicts of interest were managed

Doctors’ leaders, patient representatives, and MPs all expressed concern at the variation and said CCGs needed to be fully accountable for the money they are spending as public bodies, particularly when large sums of money are involved.

One CCG to award large sums of money to organisations in which their board members declared an interest was NHS Birmingham South Central CCG, which gave contracts worth £1.7m to South Doc Services, a GP owned company that provides services such as community pulmonary rehabilitation, anticoagulation management and audiology over two years. Four members of the CCG’s governing body have declared an interest in the company, including one of the company’s directors, Naresh Chauhan, who stepped down from the CCG board in October 2014.

A CCG spokesperson said that Chauhan had “fully complied” with the organisation’s conflict of interest rules when a board member. These rules require declarations to be made at any meeting, and members that declare an interest to abstain from taking part in any decision.

Chauhan said, “I declared any conflict, and if there were any meetings that discussed anything which may have an impact on the contracts, I declared the interest and left the meetings.”

When questioned on the how the money South Doc Services had received was used, Chauhan said, “We’re a non-profit making organisation, we don’t give dividends. I can’t discuss [what the money is used for] because it’s commercially sensitive.” In a follow-up letter to The Times, Chauhan said the company, “reinvests all funds back into patient care.”

The investigation also highlighted 15 contracts worth £2.2m awarded by NHS Newham CCG to organisations in which some members had apparent conflicts of interest (box). This included an out of hours contract worth £577 047 awarded to the Newham GP Cooperative, of which CCG board member Jim Lawrie is chair and CCG deputy chair, and Ashwin Shah, is a board member. Shah’s interest was not declared when he attended a meeting of the CCG’s procurement committee in March 2015 during which the CCG board was told of a decision to extend the out of hours contract until a wider procurement took place in 2016.

In response, a spokesperson for Newham CCG said, “We acknowledge that in the March 2015 procurement committee meeting, a conflict of interest should have been declared and recorded at the time. It is important to note that the item in question was a brief update to the meeting and not an extensive paper requiring any decisions to be made from those present and so no decision was influenced in this case.”

The spokesperson added, “Newham CCG takes its responsibilities around managing conflicts of interests seriously and it is an area that we continuously look to strengthen.”

Other CCGs where conflicts were identified included NHS Bedfordshire, NHS North Durham, and NHS Canterbury and Coastal, the last of which awarded £1.9m worth of contracts to Whitstable Medical Practice—where CCG board member John Ribchester is a partner.

Ribchester said the CCG had a very robust process for dealing with conflicts of interest. “As a GP … you might be involved in designing the pathway [but] at that point your involvement as a GP would end. Then it would go out to the procurement team of the CCG. It would be very wrong if you were involved in the procurement if you were also a potential provider. We certainly don’t do that.”

But Ribchester added, “I think a bit of trust in the system would be quite nice … try to trust that there are some of us out here trying to do the right thing for patients.”

An NHS England spokesperson said, “Robust statutory guidance on managing conflicts of interest for CCGs has been published with input from the National Audit Office and other regulators. A national audit is underway to look at how these arrangements are working in practice.”

“I don’t think this is anywhere near the transparency we need,” she said.

“It’s very easy to tick a box and say we won’t participate in that part of the conversation, but what about the influence you have on your colleagues on the board who can speak up on your behalf?”

Meg Hillier, the new chair of the House of Commons Public Accounts committee—which produced a report last year demanding action on the “significant” conflicts of interest in general practice out of hours care3—said MPs may re-examine the wider issue in light of the latest findings.

“It’s about not just transparency and accountability but the appearance of those things. We want to look at that. There is definitely a governance issue. There needs to be the same level of standards for CCGs as there are for charities,” she said.

Hillier added that it was “ridiculous” for GPs to claim that their provider companies’ use of money is commercially sensitive.

“This is taxpayers’ money. There should be nothing to hide,” she said.

Clare Gerada, a GP in Lambeth and former chair of the Royal College of GPs, said there was a real danger that the current system would erode the trust and relationship between GPs and patients.

“You’re beginning to wonder whether things are being done in your best interest or in the interests of profit. We’ve got to be careful that it’s the patient’s pulse we’re feeling not the patient’s purse,” said Gerada.

Chaand Nagpaul, chair of the BMA’s GP committee, said that GPs who are directors of provider organisations should not hold a board position on a CCG which could commission that provider. “There should be a clear line,” he said.

Nagpaul added that even if CCGs are operating within the rules, the NHS should hold itself to higher standards than other industries.

“[The NHS is] a service rooted in very strong values and principles that the public expect of it,” he said. “I don’t think we should be judging ourselves on the way the commercial world may operate.”

To bolster governance, the BMA has also advised that each CCG should have a separate scrutiny committee of non-conflicted members to commission services from local general practices, which could include GPs coopted from neighbouring areas.

Nagpaul added that NHS England’s guidance may need to be revised as it is currently “too permissive” and leaves “enormous scope for variation between CCGs.”

“As long as CCGs … have the recommended checks and balances in place when they procure services, then the rationale for what and how they are commissioning from member practices will withstand scrutiny,” she said.

The issue of conflicts of interests has become even more problematic since NHS England decided to delegate co-commissioning of primary care services to CCGs from April 2015.

In recognition of the additional conflicts of interest this will create, NHS England has drawn up new rules stipulating that CCGs that have taken on co-commissioning primary care must do this through new arms’ length committees in which GPs are in the minority.

NHS England is also auditing a random sample of CCGs to review how conflicts of interest are being managed under co-commissioning arrangements, the findings of which it intends to share with CCGs later this year.