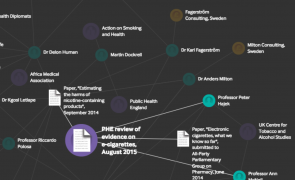 The handling of evidence for its controversial report on e-cigarettes adds to questions about the credibility of the organisation’s advice, finds Jonathan Gornall

The connection between Trélex, an unremarkable Swiss village about 15 miles north of Geneva, and the endorsement of electronic cigarettes by Public Health England might not be immediately apparent. But the small village is home to half a dozen Swiss registered companies whose sole owner’s business activities are central to rising concerns about the credibility of Public Health England (PHE).

PHE was created as an “operationally autonomous executive agency” of the Department of Health on 1 April 2013, when responsibility for public health passed to local authorities. Its function is to “protect and improve the nation’s health and wellbeing, and reduce health inequalities” by providing government, local government, the NHS, public health professionals, and the public with “evidence-based professional, scientific and delivery expertise and advice.”1 2

In the two and a half years since then, PHE has been embroiled in a series of controversies about the quality and credibility of advice it has issued on topics including fracking, NHS health checks, and the NHS Diabetes Prevention Programme, raising concerns about both its competence and its supposed independence (box). It has recently been in the firing line again, accused of bowing to political pressure by initially agreeing not to publish its review of measures to reduce sugar consumption.3

Fracking and other criticisms

To the astonishment of MPs and environmental groups alike, Public Health England’s priority on its formation was not to tackle one of the big bêtes noires of public health but to weigh-in on the debate over the government’s plans to encourage large scale extraction, or fracking, of shale oil and gas in the UK.

In October 2013, PHE’s Centre for Radiation, Chemical and Environmental Hazards released a draft …

See other articles in issue 8032