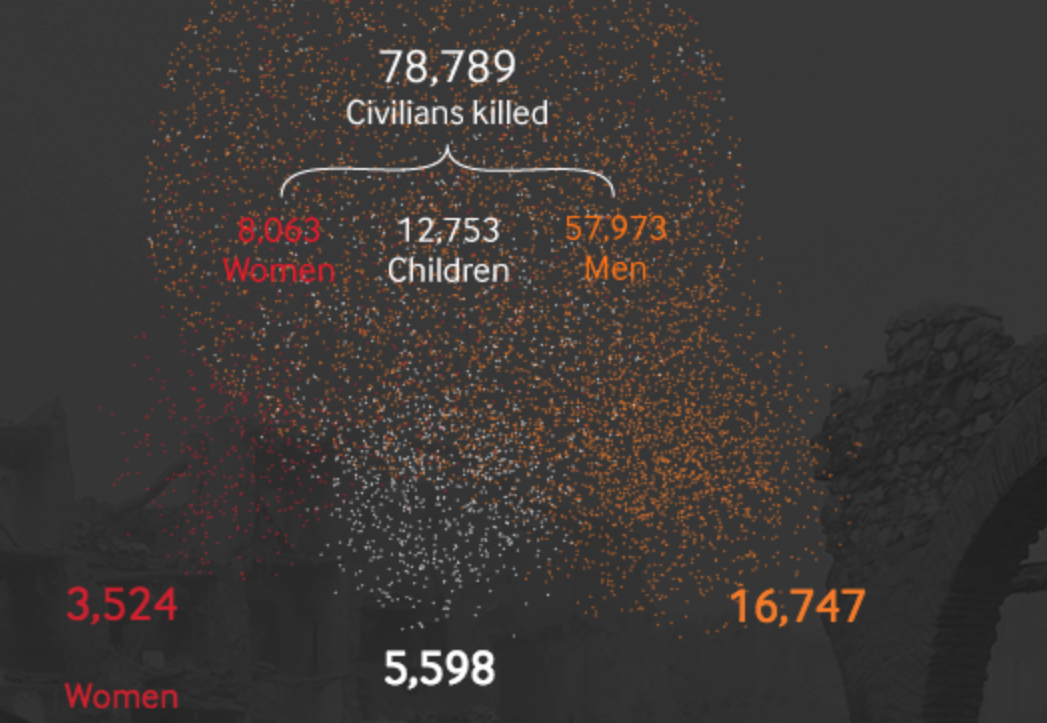 Violent deaths have been considerable in Syria. A report commissioned by the United Nations found that from March 2011 to April 2014 over 191 369 verifiable violent deaths of individuals had occurred, including both combatants and civilians. Individuals were identified by their name and the date and location of their death, thus representing the minimum number of violent deaths from the Syrian conflict at the time.10

Population surveys can provide estimates of overall deaths and excess fatalities in a war.11 12 13 14 But epidemiological analyses of war deaths from specific weapon types have been hampered by small sample sizes and uncertainties that limit their usefulness. Associations between weapon types and victim characteristics in armed civil conflicts are not well understood and are rarely studied.15 16 Individual records of violent deaths and their causes are difficult to obtain from death registration systems as they progressively lose functionality or become unreliable in conflict.11 12 17 18 Human rights groups and non-governmental organisations have produced large, detailed registries of individual violent deaths based on systematic collation of media reports15 and data on casualties collected by volunteers on the ground, as in Syria.10 19 Such detailed, individualised data can provide useful insights into weapon associated patterns of deaths.

Four groups have provided ongoing documentation of verifiable and identifiable violent deaths in the Syrian conflict: the Syrian Center for Statistics and Research, the Syrian Network for Human Rights, the Syrian Observatory for Human Rights, and the Violations Documentation Center in Syria (VDC). These have provided the majority of data used by the UN Office of the Commission for Human Rights.10 However, VDC is the only one of the four to identify whether each death is that of a civilian or a combatant. Distinguishing between the two, and identifying the means by which they are killed, can aid the assessment of possible human rights breaches. It can increase understanding of the nature and practices of a war, inform improved civilian protection, and identify demographic groups that are particularly vulnerable to the different types of weapons used in a war.6 15 The VDC considers any member of any NSAG or of the Syrian Army to be a non-civilian.20

We used VDC data to examine 78 769 civilian violent deaths that occurred in Syria from 18 March 2011 to 21 January 2015 for associations between weapon types and demographic groups. Of these deaths, 77 646 were in NSAG controlled areas and 1123 in government controlled areas (see appendix A on thebmj.com for a full description of our methods). Although the majority of deaths were of men, nearly 25% of Syrian civilians killed were women and children (see tables B1 and B2 in appendix on thebmj.com).

In NSAG controlled areas, time trends of cumulative deaths by weapon types indicate an increase in the use of shelling (which in the VDC database includes artillery and tank shells, mortars, rocket launchers, and ground launched missiles), air bombardments, shooting, and executions around the middle of 2012. Of these, shelling claimed the largest number of civilian lives. A notable rise in deaths caused by air bombardments also occurred towards the end of 2013 (fig 2⇓). A total of 969 (1.2%) deaths reported in NSAG controlled areas and zero deaths in government controlled areas were caused by chemical weapons (tables B1 and B2).

High proportion of children are dying

The government and rebel factions in Syria typically claim that the targets of their bombs and shells are enemy combatant strongholds, but our findings indicate that for Syrian children these are the weapons most likely to cause death. Children who died in the Iraq war were also most likely to have been killed by bombs or shells.6 15 Conversely, the impact of bombs and explosives on children in the Croatian war (1991-5) was much more limited, and female deaths were rare.17 The vast majority of deaths of children in the Croatian war were caused by firearms (99.2%).

Because children in the Syrian conflict are generally not in a combatant role, the high proportion of children among victims of explosive weapons may signal possible disproportionate or indiscriminate behaviour or weapons.6 8 21 22 23 It could also be the result of the intentional targeting of civilian dwellings and areas likely to contain high proportions of children.

Weapon types and deaths of civilians

The targeting of children by suicide bombs (in the ground level explosives category) has been documented in Syria.18 Therefore it cannot be assumed that deaths of women and children from large area explosive weapons are always from the indiscriminate nature of the explosion affecting anyone in the area. The examples of suicide bombing of children at schools (by unknown perpetrators) and of barrel bombs being dropped by helicopters repeatedly over hospitals by government forces indicate that indiscriminate weapons can be used in a targeted manner against children and other civilian groups.5 18

Women were significantly more likely to die from chemical intoxication (4.72 (3.93 to 5.67)) than men, as were children (2.11, 1.69 to 2.63). Our findings indicate that the use of chemical weapons in NSAG controlled areas was particularly harmful to women and children and that the partial destruction of chemical weapons after mid-2012 probably saved many lives.

For children, on the other hand, deaths caused by air bombardments or shelling were even more likely than those caused by chemical weapons. Ground level explosives were similarly likely to cause the death of children as chemical weapons in this war. Although chemical weapons are an international target for control and destruction, air launched bombs and shells, which are at least equally and in our analyses probably more lethal (for children in particular), remain without effective sanction.

Children had higher odds than women

Other studies of direct deaths from weapons in the Syrian conflict have examined their impact on children.19 However, to our knowledge this is the only study at the time of writing that examines and compares violent deaths from different weapons in civilian children, women, and men. In addition, our study uses measures of association in a modelling framework to ascertain the relative impact of these weapons on causing deaths in these different civilian groups (see appendix on thebmj.com for a full discussion of the strengths and limitations of our study).

The unanimously adopted resolution 2139 by the UN Security Council in February 2014 states that access to humanitarian aid should be increased for Syrians, attacks against civilians should be ceased, and sieges of populated areas should be lifted. Our findings show the ongoing, severe impact of war on the deaths of children, women, and men in the civilian population related to the continued disregard of these resolutions.25 Our analysis indicates that using explosive weapons in populated areas in Syria has disproportionately lethal effects on women and children and should be urgently prohibited. Given the mortality burden of weapons on children and women in Syria, active measures to stem the flow of heavy armaments to all sides in the Syrian conflict are a possible way to cease hostilities. This was a major lesson learnt from the Lebanese civil war when the import of heavy weapons was stopped by outside powers and should be used now.