Why do female doctors earn less money for doing the same job?

Despite accounting for almost half of the medical profession, female doctors still earn less than their male counterparts. Abi Rimmer examines why this gender pay gap has continued for so long

Women have practised medicine for over 100 years, and yet female doctors still earn 29% less than their male counterparts.

In fact, the gap between male and female doctors’ pay has widened in recent years. In 2004 male doctors earned 21% more than their female colleagues, but by 2013 they earned 40% more, according to figures on median pay from the Office for National Statistics (figure⇓).123 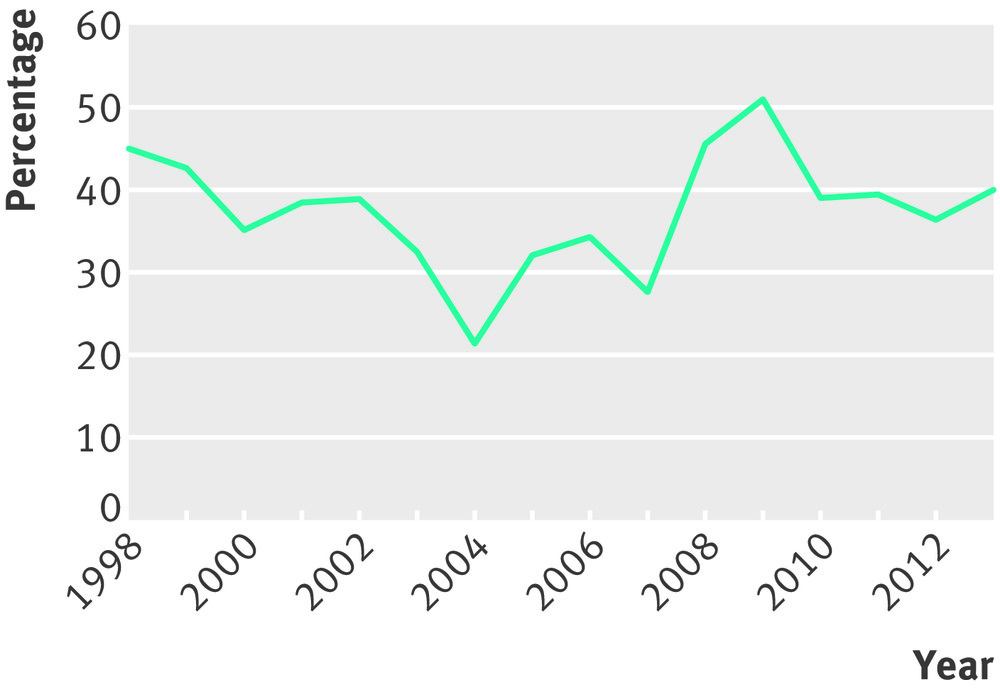 In 2009, the BMA published a report based on a survey of over 1160 doctors gathering detailed information on the pay of male and female doctors.4 The survey found that, in general, female doctors earned 18% less than male doctors, equating to a raw pay gap of £15 245. By controlling for factors such as part time working, maternity leave, and fewer years of experience, the BMA found a “true” gender pay gap among consultants of 5.6%, equating to £5500 a year, and among trainees of 4.1%, equating to £2000 a year.

Sally Davies, president of the Medical Women’s Federation, says that doctors’ pay should “theoretically” be equal between men and women. “In the NHS . . . it couldn’t be any fairer,” she says. “The trouble is all the extras, the bits of ‘if I do that will I get a responsibility payment?’”

Aside from factors such as part time working and maternity leave, other factors contribute to the gender pay gap, Davies says. “What’s interesting, and I know it is the same in the business world, is that if you look there is an unexplained section. Even with women who have worked full time, have never had any time off, and haven’t had children because of their careers, there’s still this unexplained gap,” she says.

One factor contributing to this “unexplained” gap could be that women often focus all of their professional attention on caring for patients and running services, Davies says. This allows them less time to take part in extra activities that might boost their careers, such as networking with peers, attending international conferences, or joining committees.

“A lot of women will be consultants working very hard for the service; they won’t necessarily be the people on the train up to London to sit on royal college committees. And it’s those things that I think are in the unexplained group. [If you’re on a committee] you get seen as a ‘good chap’ and the next time you’re applying for royal college backing or a CEA [clinical excellence award] to increase your salary they’ll think, ‘Oh he’s that nice chap who sits on that committee.’ I think these unexplained bits are intangible. People tend to promote, sponsor, and reward people who are like them.”

Another factor contributing to the gender pay gap, Davies says, is CEAs. In 2011, the most recent year for which figures are available, women accounted for just 19% of all applicants to the awards and 24% of consultants who received them. In the same year, of the 25 of the highest “platinum” awards given out, 21 went to male consultants and four went to female consultants.5

In 2009, a report by Baroness Deech, then chair of the National Working Group on Women in Medicine, recommended that CEA selection panels should be “gender balanced wherever possible” and that the processes of the Advisory Committee for Clinical Excellence Awards should be “monitored for gender equality.”6

The advisory committee has 14 members. Just one is a female doctor and all three lay members are women. In 2012, the most recent year for which data have been published, women accounted for 29% of all committee members and just two of the 14 regional subcommittees that assess CEA applications had female chairs.

The problem, Davies says, is not that the CEAs are unfair to women, but that not enough women apply for them. “I think men put themselves forward. I have been involved in scoring CEA applications and it’s interesting—there’s a different approach [taken by men and women]. You read a woman’s form and she’ll tell you exactly what she does, but a man’s form will be full of all the wonderful things he has led and developed.”

Data show that women who do apply for awards are more likely than their male counterparts to be given an award. Although only nine women applied for a platinum award in 2012, female consultants had a 44% success rate, compared with a 25% success rate for male consultants.

Another issue with the awards, Davies says, is that although women often receive lower level awards early on in their careers, their subsequent involvement with day to day work means that they do not reapply. “You can only get so far with your salary and if you’re not an academic you can’t get up into the higher awards which are weighted towards people who are full time and able to do research,” she says.

“A lot of women when they are doing well in their career may well achieve a bronze award but then as they get more senior they tend to be the people who are really responsible for their departments,” she adds. “They’re caring for their departments just as they would look after everyone at home, and they often miss out on applying for the higher awards because they then think, ‘I haven’t done enough, I haven’t done anything over the last five years, I’ve been too busy running the service.’”

Penny Newman, general practitioner and author of Releasing Potential: Women Doctors and Clinical Leadership, thinks that women are sometimes paid less than their male colleagues because they are not always as good at negotiating salaries. “If we [women] go for a job and a man who is the main wage earner goes for the same job, he might have more incentive to say, ‘I need this amount,’” she says. “He might be a more aggressive negotiator, whereas a woman might think, ‘I feel really uncomfortable talking about money and we have two incomes,’ so they might be less comfortable negotiating about money—some other aspect of the job may be more important. Of course, this is changing as women are increasingly becoming the main wage earners.”

Women’s own perception of their skills may also play a part in their ability to negotiate as well as men, Newman says. “Women often have lower confidence than men and think we need to do more exams and get more experience in order to justify a position or that amount of money,” she says. “The evidence is that men are more likely to give it a go even if they don’t have all the required skills.”

Women may also be more likely to compromise on pay than men, because often they want to work part time, Newman says. “Women are choosing general practice over other specialties in order to work part time,” she says. “What’s happening now is you have about a 900% increase in salaried GP roles, which are mainly women working part time, and the difference [in pay] between salaried GPs and partners is not just a little difference.”

She adds, “What we’re seeing is a growing number of female salaried GPs who are willing to take on that role because it fits in with family life or a portfolio, when actually they’ve got the same qualifications as partners,” she says. “Another example where women miss out is in putting themselves forward and receiving CEAs.”

One way to tackle the inequality in pay, Newman says, would be to publish the salaries of doctors. “We need to publish salaries for similar roles and any gender gap,” she says.

Newman points to the example of the International Centre for Women Leaders, which publishes an annual report on the number of women executive directors on the corporate boards of the Financial Times Stock Exchange (FTSE) list of the UK’s top 100 companies.

“The female FTSE report has done a fantastic job in illuminating the under-representation of women at board level, which we haven’t done yet in the NHS and we need to do including pay—measurements are really important,” Newman says. “Women need to learn to negotiate and . . . we must teach our daughters that they are worth equal pay.”

Vijaya Nath, assistant director of leadership at the King’s Fund, says that, since women now account for the majority of medical students and foundation trainees, there shouldn’t be any disparity between male and female doctors. “This is about addressing the fact that there’s an imbalance and that imbalance varies across specialties,” she says. “We are going to see many more women coming into medicine but their male counterparts are still being paid more than them for the equivalent role.”

Even though the number of women in the workforce is increasing, Nath says, this may not mean that pay will become equal. “I think there will be some change but I think there are some factors like rurality or your attachment to people or other commitments that might mean it is easier to be more mobile and more flexible if you are single than it is for people who are not,” she says.

One area of medicine where women are still markedly in the minority is academic medicine. Research has shown that women represent 42% of lecturers, 30% of readers and senior lecturers, and 15% of professors in UK medical schools,7 and earlier this year a study from the University of Oxford showed that men were far more likely to pursue a career in academic medicine than women.8

Sarah Stewart-Brown, chair of the BMA’s Women in Academic Medicine Group, says that the competitive nature of the discipline means that women often do not apply for the highest paid roles. “The academic world is intensely competitive, and women are less likely than men to enjoy competition for competition’s sake so they are more likely than men to say, ‘I’m not going to compete, I’m going to stay where I am where I can make a perfectly reasonable contribution.’”

Since women are less likely to apply for highly paid roles, they are less likely to be appointed to them, Stewart-Brown says. “Because pay is seen as a marker of the value of your contribution to the profession they are therefore seen as less valuable,” she says. “Doctors with gold or platinum CEAs, a key determinant of the gender pay gap in academic medicine, are seen to be the most successful and are the most likely to be invited on to academic panels and professional bodies where decisions get made about what is and isn’t valued.”

If women are not in the most highly paid jobs then their research tends to become undervalued, Stewart-Brown says. “One important issue for academic medicine is that women tend to be more interested in disciplines that deal with the human issues in medicine. For example, public health is quite a female academic discipline and research in public health tends to be about things that would make a difference to people’s lives and not things where discoveries can be used to make money. Because research that has a commercial end product is particularly highly valued, women tend to be at a disadvantage.”

Research undertaken by Sally Davies, chief medical officer for England, and published earlier this year showed that the lack of women in academic medicine means that some areas of medicine are not being properly studied.9

Stewart-Brown emphasises the ultimate importance of these inequalities in medical careers. “This matters not just for gender equality,” she says. “It also has an impact on what people think is good medicine because we tend to value what is researched. So this gender gap has a distorting influence on medical practice. Patients know that the softer things in medicine, the capacity for compassionate care, for example, matter a great deal, but patients have only recently had a voice in the direction of medical research and their voice is still not a very powerful one.”