Copyrighted Material, used by arrangement with John Wiley & Sons Limited. For personal use only, must not be reproduced or shared with third parties. Anyone wishing to reproduce this content in whole or in part, in print or in electronic format, should contact digitalrightsuk@wiley.com

Browse the ABC series at www.wiley.com

Worldwide, there are approximately 450,000 deaths each year from drowning. Most occur in low- and middle-income countries, but in 2006 there were 312 accidental deaths from drowning in the UK and 3582 in the USA, an annual incidence of 0.56 and 1.2 per 100,000 population respectively. Drowning is the leading cause of accidental death in Europe in young males. It occurs most commonly during the warmer summer months (Figure 1). Contrary to popular perception, nearly half of drowning cases occur in inland waterways. Drowning in a swimming pool is relatively rare (Figure 2). 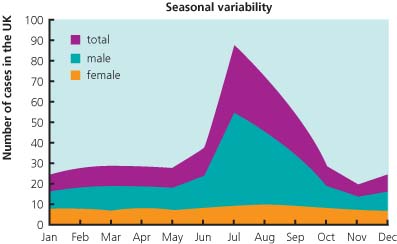 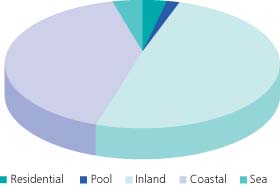 Many definitions and sub-definitions of drowning exist which have resulted in confusion and inability to compare studies on management and outcome. To try and simplify matters, an advisory statement from the International Liaison Committee on Resuscitation (ILCOR) was published in 2003 under the title Recommended Guidelines for Uniform Reporting of Data From Drowning. The “Utstein Style”. In it, drowning was defined as a process rather than an event: Drowning is a process resulting in primary respiratory impairment from submersion/immersion in a liquid medium. Implicit in this definition is that a liquid/air interface is present at the entrance of the victim's airway, preventing the victim from breathing air. The victim may live or die after this process, but whatever the outcome, he or she has been involved in a drowning incident.

The sequence of events in drowning that lead to death are summarised in Box 1.

The need for oxygen

When cardiac arrest occurs due to a primary cardiac cause (sudden cardiac death – SCD) the problem is one of failure to circulate blood that, at least initially, is well oxygenated. When cardiac arrest occurs following drowning, the primary cause is hypoxia. In SCD, the priority of treatment is chest compression; in drowning, it is ventilation. Because around 70% of out-of-hospital cardiac arrests in developed countries are due to SCD, standard BLS guidelines are aimed at the majority case with the emphasis on chest compression. One of the important differences to be remembered when managing a case of drowning is that restoration of adequate ventilation is a prime objective.

In many cases the victim has first to be rescued to dry land before definitive treatment can start. This presents dangers for the rescuer. Never enter the water unless absolutely necessary (Figure 3): consider reaching to the victim with a stick or throwing a rope or floating aid if the victim is near to land. If these will not reach and no boat is available, carefully weigh up the potential dangers of entering the water. If you have one, wear a lifejacket and take a floating aid with you. It is safer to go with another rescuer than on your own. Even then, be very wary of getting too close to a panicking victim who may grasp and pull you under the water. Even an apparently unconscious victim may ‘recover’ and grab you; the result can be two drowned victims rather than one.

Rescue breathing is possible in the water, but do not attempt this unless you have been trained in the technique. Mouth-to-nose ventilation may be used if it is difficult for the rescuer to pinch the victim's nose closed, support the head and open the airway in the water. Chest compression is not feasible.

Once on dry land, confirm cardiac arrest (unresponsive and not breathing normally), and position the victim supine with the head at the same level as the body (parallel with the shore). Laypersons trained in CPR should follow the standard CPR sequence and use the usual 30:2 compression:ventilation ratio. Healthcare providers, and those with a duty of care to drowning victims (such as lifeguards), should give 5 initial rescue breaths before continuing with a 30:2 compression:ventilation ratio.

Attempts at ventilation may be difficult due to increased resistance caused by water in the airways and pulmonary oedema. Chest compression may be hindered by reduced chest wall compliance, aggravated by hypothermia. These adverse conditions may be overcome by slowing down the rate of inflation and compression, but only as much as is necessary to achieve the necessary inflation and chest compression.

If oxygen is available this should be administered, provided it does not impede rescue breathing, for example by attaching to a resuscitation face mask.

Regurgitation of stomach contents is very common during resuscitation after drowning. If it occurs, the victim should be rolled onto the side, away from the rescuer, and the material cleared from the mouth.

Abdominal thrusts (Heimlich Manoeuvre) should only be used if there is clear evidence of solid material obstructing the airway. Never use as a routine procedure in drowning as this will only increase the chance of further gastric regurgitation and inhalation of fluid into the lungs. Chest compressions alone are often effective in clearing an airway obstruction.

Contrary to popular belief, the incidence of cervical spine injury in drowning victims is surprisingly low (0.009%) unless there is a clear associated factor such as diving, water-slide use, signs of trauma or signs of alcohol intoxication. Although it is wise to keep the victim's head and torso in alignment during handling, unnecessary cervical spine immobilisation can interfere with opening the airway and may delay rescue breaths and the start of CPR. Routine stabilisation of the cervical spine in the absence of circumstances that suggest a spinal injury is not recommended.

The first recorded ECG rhythm following cardiac arrest from drowning is less likely to be ventricular fibrillation (VF) than after SCD, but drowning may occur secondary to another cause of cardiac arrest, such as myocardial infarction or stroke. It can also occur, rarely but dramatically, particularly in young swimmers, as sudden collapse in the water. Some such cases are due to congenital, structural abnormalities (e.g. hypertrophic cardiomyopathy, arrhythmogenic right ventricular cardiomyopathy) or an ion channelopathy (e.g. long QT syndrome (LQTS); Brugada syndrome; catecholamine polymorphic ventricular tachycardia). In all these cases, VF may well be the presenting arrest rhythm and an automated external defibrillator (AED) should be sought as soon as possible whilst continuing uninterrupted CPR.

The victim should be removed from the water and the chest quickly dried to allow the AED electrode pads to adhere. The presence of some water on or around the victim does not pose an additional risk to the rescuer, but normal safety precautions should be observed.

As soon as equipment, and those with the skills to use it, arrives:

Don't confuse agonal breathing as a sign of life

A young, strong swimmer sustained a cardiac arrest in a swimming pool. During CPR slow deep and irregular breaths were noted, CPR was stopped and the victim died. The description is the characteristic appearance of agonal breathing. Agonal breathing is a sign of cardiac arrest. Do not stop CPR unless normal breathing or consciousness is restored.

Victims of drowning may become hypothermic if they are submersed in icy water (<5 °C). This can provide some protection against the effects of hypoxia and probably accounts for reports of victims (usually children) being successfully resuscitated after, perhaps, an hour under water. Extracorporeal membrane oxygenation (ECMO) has been used successfully following refractory cardiac arrest secondary to drowning, particularly when the victim is very cold.

Since therapeutic hypothermia is recommended for unconscious victims resuscitated from pre-hospital cardiac arrest, should hypothermia be reversed in a victim resuscitated after drowning? There is no good evidence-based guidance, but the International Life Saving Federation takes the pragmatic approach that such victims should be re-warmed until they reach a core temperature of 32–34 °C during post-resuscitation intensive care.

Drowning (with or without hypothermia) is one situation in which attempts at resuscitation should be prolonged, even if the outlook seems hopeless. Neurologically intact survival has been reported after prolonged submersion times. Ideally, efforts to revive a drowning victim should continue until a senior medical doctor makes the decision to stop (see Box 2). Otherwise, follow the guidance of the Resuscitation Council (UK) and continue CPR until:

Key modifications of the standard CPR sequence for healthcare providers is shown in Box 3.