A new report from the Royal College of Physicians suggests a radical approach to the problem of providing continuity of care for modern patients. Nigel Hawkes examines the details 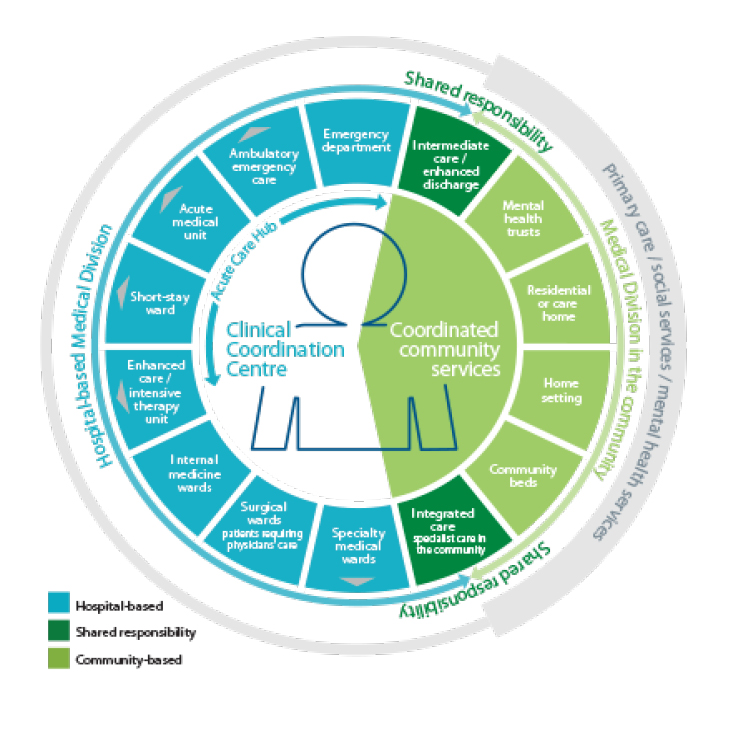 Nothing galvanises a community so much as a threat to its hospital. For better or worse, hospitals embody the reality of the NHS for most people in a way that general practice, let alone community care, cannot match. They are as important to a local sense of wellbeing as churches used to be, and defended with all the fervour that once filled those empty pews.

Yet hospitals are not the solution but the problem, according to a new report from the Royal College of Physicians (RCP). “Conventional models of health service design in which a hospital site is the sole focus for the delivery of emergency, acute and elective services are dated,” it says.1 They cannot provide the integration, collaboration, communication, and information sharing needed to care for today’s typical patients, who are elderly, multiply morbid, dependent, and often confused. The circumstances that made the hospital the icon of care have changed, but the hospital has not changed with them.

The RCP’s Future Hospital project is a bold attempt to envisage a new role for the hospital. It is one in which physical and mental barriers dissolve: the walls that trap clinicians inside buildings and within professional silos are eliminated. Care is delivered where patients’ needs can best be met, by medical teams working with professionals from primary and social care. Expertise is available seven days a week, both in hospitals and in the community. In the report’s words: “The overriding objective should be continuity of care for patients, coordinated and delivered by a single consultant-led clinical team.” The hospital ceases to be “somewhere”; it becomes everywhere.

“We went through the report removing the word discharge wherever we could,” says Professor Timothy Evans, who chaired the RCP group that produced it. “What our patients want is continuity of care, wherever they are.” Maybe, he added, some GPs will find the implication that they are not already providing such care inflammatory—“but I hope not.”

The RCP’s vision runs counter to many prevailing pressures. The intense focus on the treatment of specific conditions, such as heart disease, stroke, and cancer, has driven specialisation and improved outcomes but at the cost of fragmenting services and trapping patients inappropriately in locations where it is hard to meet all their needs. Targets such as the four hour wait in emergency departments can often result in patients being moved to a ward, any ward, as the limit approaches, rather than to the right ward—delaying specialist opinion and increasing length of stay. The payment system in the English NHS has caused an overemphasis on elective rather than acute care, while the purchaser-provider split has, says the report, undermined joined up working between secondary and primary care.

Rise of the generalist

The report believes that the future hospital will need more generalists and fewer specialists. It says: “The expectation that most physicians will become highly specialised in a narrow field must be changed.”

Nigel Edwards, senior fellow at the King’s Fund, agrees but asks, “Who’s been responsible for overall growth of specialties? The RCP has said before that we need more generalists, but I haven’t noticed we’ve produced them.”

Recruiting doctors to a generalist role (in either acute or general internal medicine) is increasingly difficult, the report admits. The workload of medical registrars is heavy; a quarter of them describe it as unmanageable. Most feel a lack of leadership, with nobody to report problems to. Yet these doctors make the key decisions about new hospital admissions: which specialties patients should be referred to, their care pathway, and their discharge. “It’s an extremely crucial job and it requires skills every bit as great as any specialist,” says Edwards. “But there’s no private income option and the workload is heavy.” He argues that clinicians who do the job should be paid “extremely well,” with an exit strategy into other roles such as management in their mid-40s before burnout strikes.

The report says general internal medicine should be promoted as a valuable and attractive career option but does not say exactly how. Its vision of future hospital services would, however, go some way towards supplying career and leadership options for generalists. It envisages hospitals organised on a “hub and spoke” pattern, with an acute care hub housing a single unified medical division that will assume responsibility for the care of all patients (except for paediatrics, obstetrics, and possibly some specialised surgical wards). The medical division would be run by a chief of medicine, an experienced physician who would assume budgetary and administrative responsibility for care in the hospital and the community, using pooled budgets. The chief of medicine would report professionally to the hospital’s medical director and operationally to the chief executive.

“Working with a shared culture and objectives across all medical speciality teams, the chief of medicine will motivate staff to provide care of the highest quality to patients, irrespective of their work base—hospital, community—or area of clinical practice, in line with the NHS Constitution and professional standards,” the report says.

Care would be coordinated from what sounds like a war room: the report calls it a clinical coordination centre. Twice a day, seven days a week, clinical teams would meet here to coordinate care in the hospital and in the community for their patients. Displays would show electronic patient records (the failure to share these records so far is “incomprehensible,” the report says) together with standard clinical referral, diagnostic, and management protocols for all common patient groups.

Other displays would show in real time where patients are, together with information about their admission, discharge, and transfer of care, as well as data on community services and bed capacity in interim or care homes. Monitors would show inpatients’ vital signs, enabling untoward events or near misses to be identified early. Telephone and email helplines for patients and professionals would be staffed seven days a week, linked to primary care, so that, as the report puts it, “responsibility for care will thus be shared between patients and practitioners in hospitals and primary care, and continuously supported by a virtual dialogue.”

There isn’t a hospital in the NHS that works like this nor, Evans believes, any international example either. He acknowledges that there would have to be changes of function at various hospitals to accommodate this system of care, raising the dread word reconfiguration upon which so many well intentioned plans have foundered in the past. Some groups and organisations, Evans concedes, “may feel threatened if they think this is going to impact on ways of working they think are good.”

Edwards says that those who recommend hub and spoke models of hospital provision are always those who will be working in the hub—while those relegated to the spokes, which stand to lose some services, may be less enthusiastic. “The risk is that the moment you can’t run acute medicine in the spokes, the requirement to find space in the hub is huge,” he warns. “But it depends what you mean by spoke.” He says there are examples, such as Heart of England NHS Foundation Trust, that he believes have made it work.

Evans’ response to this is to say that there won’t be such a clear distinction between hub and spoke. “We’re all going to be in the spoke,” he says. “It’s hard to think of an example, except possibly intensive care, where more community care couldn’t be delivered.” And he says that there is no intention of imposing the same model everywhere. ”One size doesn’t fit all,” he says. “You can’t close a hospital in East Anglia if there’s only one there.”

Some surgeons may cavil at the diminished role they occupy in the RCP’s new vision. Once the surgeon has operated, most of the problems today’s elderly patients face are medical, not surgical, the report argues. Patients on surgical wards should be under dual supervision of physicians and surgeons. “Consultant surgeons may provide a more consultative service based on technical aspects of the surgery and post-operative complications,” the report says, adding, “This arrangement will have major implications for surgical trainees—with all but the more senior trainees redeployed to physician-supervised duties and realigned to medical training programmes.” The message is clear: surgeons should be on tap but not on top.

Norman Williams, president of the Royal College of Surgeons, bridles slightly at the implications of this. “Surgeons are more than technicians,” he says. “I think it would be extremely dangerous to leave all postoperative care to physicians. Time and again juniors think postoperative problems are medical but an experienced surgeon can often see they’re not.” He cites the example of urinary symptoms after colon surgery, which could be infections but could equally be the results of bladder damage. That said, he adds that in treating fractured neck of femur, close cooperation postoperatively between surgeons and physicians had produced fantastic results. “But that’s a very specific case—other specialties are different.”

The report is largely silent on where the money would come from or, indeed, how much the plan would cost. That’s a future project in a continuing programme of work, Evans says. Some would come from shifting the emphasis for elective care to acute and emergency care—which has been “chronically underfunded” according to the report—but that would need reform of payment by results, which tends systematically to underestimate the costs of acute care. Providers have expanded elective care because the price per unit is strong and largely volume based, while acute care is usually part of a block arrangement. “It is crucial that these funding anomalies are resolved,” the report argues.

Williams, who chairs the Academy of Medical Royal College’s working party on seven day care and was a member of the steering group for the RCP report, agrees that there needs to be a switch of emphasis away from elective targets. “Everybody recognises that,” he says. “The problem is that if we concentrate more on emergency and acute work, keep the same staffing, and don’t reconfigure while having consultants working more at weekends, then that will affect electives.” Like the report itself, he is unsure where the money is coming from to make these changes possible, but he agrees they are necessary.

“Many of the recommendations it makes are very important and we support most of them,” he says. “It’s ambitious, but that’s appropriate, too. We all agree that the patient should be at the heart of the care we deliver and if you’re a patient you don’t have any doubt that 24/7 working is the way. But we’ll need to get there in stages, and with the best will in the world, it’ll take some time.”

See other articles in issue 7924