Number of singlehanded GPs in England has nearly halved since 2002

The number of singlehanded GPs in England has almost halved over the past decade, figures from the NHS Health and Social Care Information Centre show.1

The BMA believes that the drop in the number of singlehanded practices could reduce patients’ opportunity for one on one personal care with the same GP on each visit.

Singlehanded GP providers are partners who practise without any other partners, although they may work with salaried GPs or trainees. The number of such providers fell from 2566 in 2002 to 1480 in 2012, a drop of 42% (figure⇓). 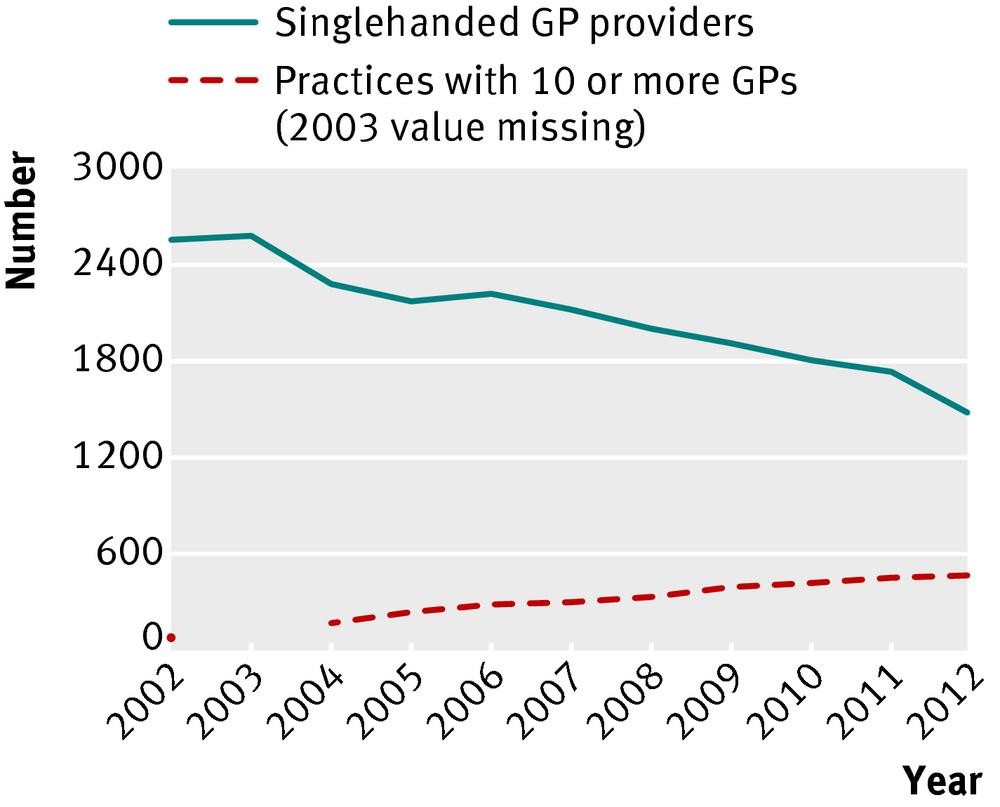 Conversely the number of practices with 10 or more GPs was more than four times higher than 10 years ago. In 2002 only 90 general practices in England had 10 or more GPs, whereas in 2012 this number had risen to 474.

Laurence Buckman, chairman of the BMA’s General Practitioners Committee and himself a singlehanded GP, said that although singlehanded practices were unlikely to be as efficient as bigger practices in business terms, they were popular with patients because they provided a more personal service.

“A large number of patients want personal care, so losing that version of practice does not improve their choice,” he said.

Buckman believes that the government has sought to drive down the number of singlehanded GPs, because it saw small practices as inefficient and old fashioned. “They’re perceived as low quality, but there is no evidence to back that up,” he said. “Patient satisfaction scores are very high with small practices.”

The move from singlehanded GP providers to large practices with many GPs began with the NHS Plan in 2000,2 which suggested that special contractual arrangements were needed for singlehanded GPs to reduce the “clinical isolation” experienced by these GPs and to improve standards of care. The push towards larger practices continued with the introduction of polyclinics in 2008.

A Department of Health spokesman said: “There is no one-size-fits all blue print for providing the most suitable services for patients and so contracts are arranged to meet the needs in a specific area. If a single handed surgery can prove they are capable of providing the services needed, there is no reason why they could not enter into a contract.”