Bed bugs are bloodfeeding insects that seem to be resurging in developed countries,1 possibly due to international travel and changes in pest control practices.2 Diagnosis of bed bug infestation relies on clinical manifestations of bites and direct observation of the arthropod, which is rarely recognised by those who are bitten.3 Evidence is lacking on the bed bug’s capacity to transmit disease, management of eradication, and the economic impact of infestations. This summary of the available evidence on the diagnosis and management of bed bug infestation aims to help general practitioners identify the clinical signs of bed bug bites and help patients identify and manage infestations.

We focused on articles published since October 2008 to update Goddard and colleagues’ systematic review.2 We searched PubMed and Embase databases until July 2012, using the search terms “bedbugs [Mesh] OR bed bugs OR bed bug OR Cimex”. We also manually searched textbooks, newspapers, and websites, mainly those listed by the Centers for Disease Control and Prevention (www.cdc.gov/nceh/ehs/topics/bedbugs.htm). Our selection criteria were case reports on more than five patients, and results related to humans in the field of prevention and elimination of bed bugs or clinical manifestations of their bites.

What are bed bugs?

The two main species of bed bugs are Cimex lectularius and Cimex hemipterus, which are found in tropical zones and temperate areas, respectively. They are brown, wingless, flat, 2-5 mm long insects that resemble apple seeds. If in doubt, contact an entomologist for precise identification. The bugs have a multi-stage developmental life cycle and require a human blood meal every 3-5 days to progress from one stage to another (fig 1⇓).1 After contamination by a few bed bugs, their number increases exponentially. They can survive for one year without eating.

Where are bed bugs found?

Over the past 10 years, bed bugs—which had almost disappeared after the second world war—have increasingly been found in low budget and upmarket hotels, hostels, bed and breakfasts, private homes, night trains, cruise ships, and even nursing homes.1 4

Bed bugs are usually transported passively, mainly in clothing and luggage, but also on furniture (such as mattresses). Less commonly, they spread actively from room to room in communities, mostly through electric wiring or ventilation ducts. During the day they hide in dark places—such as spaces under baseboards, loose or peeling wallpaper, and crevices in furniture and mattresses—and they feed at night. They fear light and usually avoid smooth or glossy surfaces, such as tiles.2 Despite being easily visible, most people cannot recognise bed bugs—in a survey conducted in three counties in the United Kingdom, only 10% of 358 people identified them from pictures (fig 2⇓).3 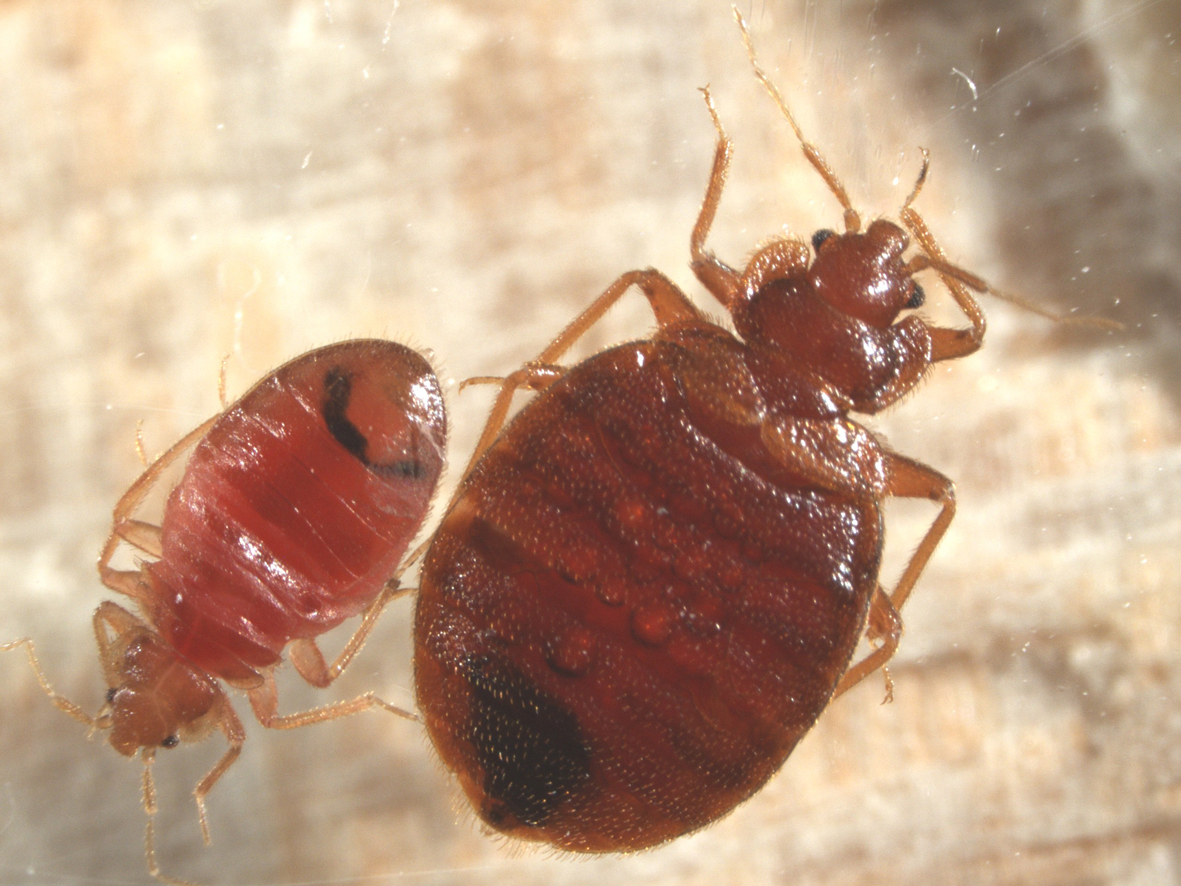 How common are bed bug infestations?

The idea of a resurgence is based on Australian and European observational studies that have shown increases in pest manager interventions (700% increase between 1997-2000 and 2001-04 in Australia, 100% rise from 2002 (383 cases) to 2006 (770 cases) in Sweden). There were also increases in calls received about bed bugs in two London boroughs between 2000 (87 calls) and 2006 (334 calls), and more inquiries about species (nine samples of bed bugs submitted to the Department of Medical Entomology, Institute of Clinical Pathology and Westmead Hospital, Sydney, Australia in 1997 compared with 37 samples in 2000). The identification of bed bugs in Australian laboratories also increased between 2001 and 2004 as did the number of bed bugs intercepted by Australian customs officials between 1999 and 2003.5 6 7

The reasons for this resurgence are unknown. Contributing factors may include increased domestic and international travel.8 As a consequence, bed bugs, which were most common among the disadvantaged social classes in the first half of the last century, can now be encountered in all economic contexts. Other factors are enhanced resistance to pyrethroid insecticides,2 9 perhaps because of multiple mutations conferring metabolic resistance,10 and the fact that newer techniques for controlling cockroaches with bait do not kill bed bugs.11

What are the symptoms of bed bug infestation?

Because bed bugs feed at night and inject an anaesthetic when biting, the initial bite is not felt and most patients have no reaction; moreover, symptom onset, caused by allergic reactions to saliva, can be delayed.2 In 2009, an ethics committee approved experiment,12 conducted by laboratory scientists who volunteered to be bitten by bed bugs placed on their arms, confirmed that reactions to bites manifest up to 11 days later. In a recent questionnaire based study, only 30% of people living in bed bug infested households reported skin reactions.13

A 2009 systematic review of 18 articles on clinical reactions to bed bug bites reported the most common reactions to be 2-5 mm pruritic maculopapular lesions with a central haemorrhagic punctum, corresponding to the bite site, that are usually located on uncovered areas of the body.2 Skin lesions, such as three or four bites forming a curve or line (“breakfast-lunch-dinner alignment,” fig 3A⇓), are suggestive of but not specific to bed bugs. Other cutaneous symptoms include isolated pruritis, papules, nodules (fig 3B), and bullous eruptions (fig 3C).14

Some isolated case reports have reported systemic reactions, such as diffuse urticaria (fig 3D), asthma, and anaphylaxis.2 Bed bug infestation is usually looked for after a clinical diagnosis of bed bug bites. Similar symptoms in people sharing a bed, onset of the lesions after travelling or sleeping away from home, detection of bed bug faecal matter (small dark marks) in or around the bed, or disappearance of symptoms after changing sleeping place should trigger suspicion of infestation. However, the discovery of bed bugs on site confirms active infestation.

What are the differential diagnoses of bed bug bites?

The most common differential diagnoses are other arthropod bites,15 especially those of fleas, which form similar three or four bite lines or curves. Scabies can be confounding but differs from bed bug bites by the absence of visible puncta and the predominance of scratching in sites such as forearms, nipples, and genitals (table 1⇓).

In addition to arthropod bites, there are several dermatological differential diagnoses.16 These include erythema multiforme, which is characterised by target lesions on the extremities, and, sometimes, mucous membrane erosions; Sweet’s syndrome or acute febrile neutrophilic dermatosis, which includes papulonodular lesions on the extremities associated with general symptoms, such as arthralgias, fever, and leucocytosis; bullous dermatitis, which can affect the mucous cavities and unlike bed bug bites, can be seen on covered areas of the body; and vasculitis, which is characterised by polymorphous lesions, usually on the lower limbs, and sometimes affecting several organs. When such manifestations are seen, refer the patient to a dermatologist for further investigations, including a skin biopsy, if necessary.

What complications can arise from bed bug infestations?

Evidence for disease transmission is less clear. Some pathogens have been detected in or on bed bugs. These include hepatitis B virus, Trypanosoma cruzi,1 hepatitis C virus,18 HIV,2 Aspergillus spp, and, more recently, meticillin resistant S aureus,19 but no study has yet demonstrated their vectorial role—their capacity to transmit diseases to humans.1

The psychological burden of bed bug infestation remains to be evaluated.

Although the economic impact is not known, bed bugs result in loss of productivity and costs include those of pest managers’ interventions and replacement of infested furniture.11

How are bed bug infestations managed?

Bed bug control is difficult, mainly because of the parasite’s hiding behaviour, and also because chemical and non-chemical technologies need to be combined for optimal effect.1 “Integrated pest management (IPM)” combines detection of the pest with non-chemical and chemical elimination strategies.

A randomised study conducted in 16 highly infested dwellings, divided into two groups, compared IPM using traps containing a killing agent and chemical treatment with diatomaceous earth dust (D-IPM) versus IPM in which bed bugs were sprayed with chlorfenapyr (S-IPM) but traps were not used.20 Both groups received patient targeted information provided by a brochure. They were also given advice on searching mattresses for hiding bugs; laundering bed linens weekly; and steaming floors, bed frames, sofas, and other infested furniture and sites. Insecticides were applied every two weeks over 10 weeks. Bed bug counts decreased by 97.6% and 89.7% after the intervention in the S-IPM and D-IPM groups, respectively.

Such eradication strategies were grouped together in documents called “Codes of practice” written by experts in Europe, the United States, and Australia,21 but their use, although recommended by some municipalities, is not mandatory.

How should bed bug bites be treated?

Guidelines based on expert opinions recommend treating the symptoms of bed bug bites with topical steroids (such as hydrocortisone 1%) once or twice a day for no longer than seven days.22 Prescribe systemic antihistamines only when pruritis is associated with sleeping difficulties.22 Antibiotics, either topical (such as mupirocin or fusidic acid three times a day for 7-10 days) or systemic, might be needed for secondary impetigo, depending on its severity.23

How can bed bugs be identified and eradicated?

Professionals need to educate patients on how to identify bed bugs and prevent spread (box). GPs can educate patients to use a “search and destroy” strategy by providing basic knowledge about the parasite. They should stress that each insect needs to bite a human every three to five days to grow and reproduce but can survive for one year without feeding, and how to detect and identify the arthropod (fig 4A⇓) or its faecal traces (fig 4B) in suspected areas, mostly mattresses and cracks and crevices in wooden furniture. This detection strategy should be applied whenever travelling.

Fig 4 To educate patients to the “search and destroy” strategy, GPs should show them pictures of (A) bed bugs and their typical hideouts and (B) bed bug faecal traces on the mattress

Small case series suggest that washing at 60°C, tumble drying at 40°C, or dry cleaning is effective against all life stages.24 A recent trial also suggested that freezing can be used to decontaminate infested clothing.24 However, because bed bugs can survive for up to one year without feeding, keeping an infested room vacant is not an effective option.1 Disposal of highly infested items, together with physical removal of bed bugs and mattress covers and vacuuming, are recommended by pest managers’ codes of practice,21 even though scientific evidence of their efficacy is lacking.

The silicates (mostly diatomaceous earth dust) are somewhere between non-chemical and chemical treatments, and require further investigation before being used in pest management programmes.20

Although insecticides can be bought in supermarkets and on the internet, for efficacy and safety reasons they must be used only by professionals. Clinicians should be aware that misuse of insecticides may have clinical consequences. The Centers for Disease Control and Prevention recently identified 111 cases of illness attributed to insecticide misuse in an attempt to control bed bugs.25 Pyrethroids were implicated in 89% of those events and caused neurological, respiratory, and gastrointestinal symptoms.

Because of different resistance levels among bed bugs, a combination of insecticides should be applied to all harbourage areas: mattress seams; cracks in furniture, box springs, and bed frames; peeling wallpaper; and under carpets and floorboards.21

It is unclear how often these techniques should be applied, but because insecticides have a limited ovicidal effect, expert guidelines recommend a second look by the pest manager, with eventual retreatment 4-20 days after the first intervention. The length of this waiting time depends on the average temperature of the infested site.

How can infestation be prevented?

Evidence is lacking about the effectiveness of prevention procedures. Experts recommend washing mattress encasement and bed linens at temperatures above 60°C,21 and advise against purchasing second hand mattresses or furniture. However, it is not recommended that mattresses are pretreated with insecticides or preventive insecticide applications.

Early detection of the bed bugs may be an effective way to prevent their spread. Notably, experimental studies have shown the efficacy of bed bug traps in attracting the parasites, especially when combined with carbon dioxide and heat,30 but their ability to control infestation without the addition of chemical techniques has not been assessed. Results of a comparative study indicated that canine detection may be an option but is operator dependent,31 and further evaluation of this method is needed.