Andrew Gibbons and Danielle Bryant outline the key to the success of all leaders: their followers

The concept of “followership” has a very important part to play in the success of any group task but is not widely understood. Unfortunately, leadership is often associated with all the positive aspects of success, and followers are falsely depicted as docile and impotent.

Doctors often take on leadership roles at work and in the community but spend a large part of their careers as followers, accountable to a more senior doctor. The NHS would not function, clearly, without the support of most of its staff members, who are not in leadership positions.

Followership is the act or condition of following a leader, largely by people in subordinate positions to those in senior ones. It is not subservience or passive obedience to orders but a process whereby followers engage constructively in critical thinking and interact with and support the leader to help achieve a task. Good followers are accountable for their actions. They can also influence and mould the leader’s views; and when necessary they can even substitute for the leader.

Followers who are not engaged with their organisation or task and do not apply independent critical thinking can be defined as passive followers (fig 1⇓). These people need constant motivation and direction and, consequently, can be a drain on the leader and the team. People who support the task and are motivated but do not critically appraise what they are doing are conformist followers. They will always support the team leader and may work hard, but they do not consider alternative options and may not make decisions without guidance from the leader. 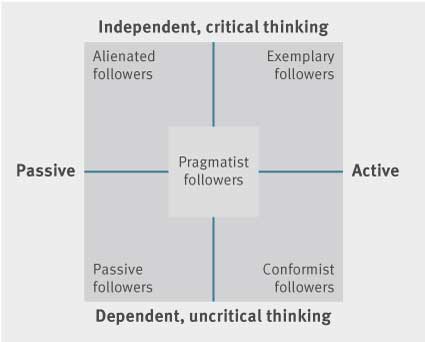 Alienated followers have high levels of critical thinking but are disengaged from their organisation and task. These followers usually come across as sceptical or cynical. When the leader or team tries to move forward, they will voice the reasons why it shouldn’t happen. In comparison, the exemplary follower will apply constructive critical thinking and interact with the group and the leader. If exemplary followers agree with the current course of action, they will back the leader all the way. Alternatively, if they disagree, they will challenge the leader, offering constructive alternatives to help the leader and the organisation achieve their aims. Pragmatic followers will move between the various styles during a task.

All followers should reflect on their style and aim to be exemplary followers. Each of the three non-exemplary styles can lead to poor group performance: a passive person does not contribute; a conformist does not think; and a cynical alienated follower may be bright but undermine the leader and the task.

It is important when working in a group that leaders and followers do not succumb to “group think,” which is where the culture of the group is such that everyone in it thinks about and analyses things in the same way. Similar views, and a desire for unanimity, may lead the group members to concur too easily and overlook potential problems and alternative ideas or options. To prevent group think, many modern businesses appoint one or two board members from successful organisations that have a completely different field of interest. For example, a surgeons’ meeting on theatre policy without an anaesthetist present will be very different from a meeting with anaesthetist representation.

The followership styles of the constituent individuals can have an important part to play in the onset of group think within teams. Within a group, passive followers agree and go along with the flow because they think that this is the group’s view, whereas conformist followers will actively support any group decision and act on it. Both these styles of followership predispose a group to group think. Alienated followers demonstrate critical thinking, which is crucial for the prevention of group think, but because of their lack of participation in the group they may not be listened to. In contrast, an exemplary follower will question the status quo and critically evaluate the facts and options before making a decision.

Being a good follower

Good followers must have the moral courage to express concerns. They should question why and understand the reason they do things but in doing so must not undermine the leader’s authority. Effective followers should be able to reflect, adapt, and take responsibility for their own actions. When the follower has understood a decision and has had questions answered he or she should back the decision of the leader or group wholeheartedly.

Nearly all leaders are also followers in a chain of command; for example, specialty trainees will supervise foundation doctors but are subordinate to their consultants. Junior doctors can tactfully question their seniors as to why a decision is taken, try to understand it, and then convey this with a sense of purpose to the nursing staff. Poor followers take negative attributes into their own leadership styles—feedback from juniors, nurses, or administrative staff, a key aspect of doctors’ appraisal and future revalidation, will often reveal this. Exemplary followers, when leaders, are more able to appreciate the concerns of their followers and to set the tone and vision that others will follow willingly.

Throughout their careers doctors will be both leaders and followers. By understanding these roles they can better influence decisions and ultimately be more effective.