We have assessed many general practitioners (GPs) whose performance has raised serious concerns and have persistently found basic failures in diagnosis, poor management, and haphazard follow-up. These doctors usually lack insight into their deficiencies and are often isolated from peers who might reveal their deficiencies and help correct them.

Professional isolation, whether in single handed or group practice, can sometimes be obvious. Adequate insight—that is, “clear or deep perception and powers of deduction”—is more difficult to determine. Such insight, although initially intuitive, needs measures to confirm to the doctor and others that there is a sufficient basis for concern. The General Medical Council’s Good Medical Practice states: “The unacceptable GP has little knowledge of developments in clinical practice; has limited insight into the current state of his or her knowledge or performance; selects educational opportunities which do not reflect his or her learning needs; does not audit care in his or her practice, or does not feed it back into practice” and “is hostile to external audit or advice.”1

We developed a list of characteristics of isolation and of lack of insight that are based on 27 cases of poor performance among GPs (table⇓).2 We expanded the list in the light of suggestions from more than 50 established GPs in the United Kingdom and after discussion with experienced GP appraisers and educationalists. We then applied these criteria retrospectively to the case files of 18 GPs who presented in our district in 2010-11 and who were managed by the primary care trust’s underperformance team. This number is similar to that in 15 international programmes of physician assessment, where the median number of assessments conducted each year was 15-20,3 and an earlier evaluation of a scheme to identify underperforming GPs.4 The doctors had between zero and 19 characteristics of isolation and lack of insight, with a mean of 10. Eight doctors (44%) had over half of the 23 suggested features, and only three had none. 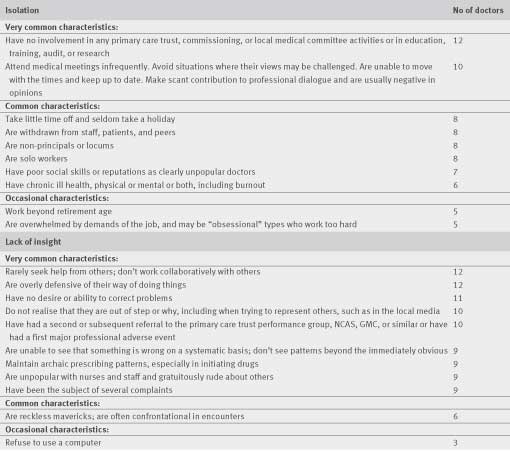 Characteristics of 18 doctors with poor clinical performance: are they isolated or lacking in insight?

Isolation is undesirable because opportunities for a doctor to receive new information are few. We need professional dialogue to understand the relevance of clinical developments so that we can incorporate them properly into practice. Limited contact with peers and appropriate experts hampers professional performance.5

To continue to perform complex and uncertain tasks well requires feedback, without which performance will inevitably deteriorate.6 Feedback requires other people to deliver it, and deeper learning often entails seeing a problem from a new perspective.6

Chronic ill health, whether physical or mental or both, including burnout and substance misuse, can easily lead to isolation. The National Clinical Assessment Service (NCAS) has repeatedly found doctors who are referred to them to be ill: “When doctors are sick they may need to take time away from work, as they would advise their patients to do, but there can be real difficulties in taking time off, particularly for GPs. A doctor treating a work colleague may feel a conflict when the advice they provide has consequences for his or her own workload.”7

Single handed or locum GPs may become isolated, as can others, because of the dysfunctional working of their professional or group practice. Such doctors are considerably over-represented in poor performance case series, often practising single handed with large lists.8 Indeed, doctors who work on their own are six times as likely to appear before a GMC disciplinary hearing.9 Sometimes a large list size may reflect an inability to curtail commitments, with the doctor becoming overwhelmed by the demands of the job. However, the number of single handed GPs has fallen from 35% of the total in 1949 to about 12% today.

Typically, isolated doctors avoid situations where their views may be challenged. They gradually fall further behind, unable to move with the times and keep up to date. They are increasingly unable to contribute to professional dialogue and become consistently negative in their opinions.

Performance may improve through sudden, irregular upward jumps, usually caused by a doctor becoming aware of a discrepancy between actual and desired performance.6 These important events can be actual or narrowly averted errors. However, it is self perceived performance that will trigger action, and when alone our self perception can be badly wrong. We have found that those practices in our district with particular difficulties understanding and learning from important events were all small: practices of one or two doctors and with a history of previous performance concerns.10

Attending medical meetings can be difficult for sessional doctors, who are often not on mailing lists or included in practice meetings. NCAS has received a considerable number of referrals of GP locums, about 10% of its workload.11

A reputation as an unpopular doctor often reflects poor social skills and is common in poor performers. Behavioural concerns identified by NCAS included eccentricity, stringent views, unwillingness to compromise, and a lack of self or social awareness.8 People in positions of authority with unusual approaches to problems can cause others to avoid them and thus lessen their opportunities to receive feedback and learn.12 Being overly defensive can extend to the hostility referred to in Good Medical Practice.

Most (59%) of the GPs referred to NCAS had education, training, or other continuing professional development concerns.8 It may be contact with peers rather than formal education that really matters. Often there is no communication between poorly performing GPs and members of the wider primary healthcare team. In many healthcare activities serious harm is “but a few unguarded moments away,”13 and therefore the presence and willingness of others to question decisions is a vital part of safe practice. Isolation weakens these primary defences against errors. A major concern of patients is being able to talk to a doctor or nurse who is committed to them as a person,14 so a withdrawn GP will inevitably frustrate this aim.

Doctors who entered general practice before vocational training became mandatory in 1981 will be in their mid-50s or beyond. Such doctors are more likely to have performance problems, and the risk of NCAS referral rises sharply after the age of 60.11

Insight requires an awareness of one’s performance in relation to the performance of others.12 It is particularly necessary for GPs, who, though members of a team, make many decisions without reference to others. “Insight failure” is an early sign of a doctor in difficulty, manifested as rejection of constructive criticism, defensiveness, and counter-challenge.14 It is remarkable how often “lack of insight” is included in the cases of erased GPs reported in GMC Today.

Not seeing beyond the immediately obvious

Improved performance requires feedback on performance and a readiness to change. This depends crucially on a degree of insight.12 Doctors need to understand the meaning of their performance, not merely the performance itself; and it is reasoning rather than the facts that matters. For learning then to occur and performance to improve, the doctor needs the insight that change is both desirable and realistic.6 The difference between self assessment and external assessment might be the “insight gap,” an important measure of our capacity to change.

A reckless maverick is often confrontational in encounters. During Harold Shipman’s professional career a series of bizarre attitudes and practices had been recognised by individuals and agencies. As a junior hospital doctor in Pontefract General Infirmary he was noted to be reckless, particularly in the dosages of injections he administered.15 This is in sharp contrast to those “mavericks” who pursue an interest or idea by scientific means and on whom much of all progress depends.

Effective management of chronic disease is extremely inefficient without regular use of a computer to check records and see what needs to be done soon, whether on a planned or opportunistic basis. NCAS has often found poor information technology (IT) facilities or use in practices they have investigated, and recommendations about IT systems have been a common outcome of NCAS assessments of poorly performing doctors.8

Insight allows a GP to navigate the complexities of primary care. “The trust that society places in doctors may well reside to a greater extent than is currently acknowledged in their ability to go back to first principles and make difficult decisions, under situations of uncertainty, on the basis of a deep understanding of the underlying science.”5 Insight is related to such understanding, enhanced by experience and by systematic reviews of the outcomes of practice, such as significant event analysis. When problems with our judgment and performance occur we need enough insight to explain them and the ability to suggest realistic options.4

“Doctors must be capable of dealing effectively with uncertainty, ambiguity and complexity; must be demonstrably committed to reflective practice; and must assess and manage risk—which requires high level decision making skills and the ability to work outside defined protocols when circumstances demand.”16 They also need to know that even the best clinical guideline is unlikely to accommodate more than around 80% of patients for whom it has been developed.17

We believe that isolation and lack of insight are key features of doctors whose performance may be seriously deficient and that these attributes are readily understood by our profession.18 They need to be stated in operational terms, not least because the GMC is training responsible officers who must be able to distinguish those doctors in genuine difficulties. This will not be easy, because longstanding mediocre performance is often difficult to manage and remedy, owing to a lack of insight,14 perhaps the most crucial attribute of the “acceptable GP.”

Experienced doctors who assess possible underperformance may think, “I know it when I see it.” We were not so sure. In our experience the features of isolation and lack of insight, although needing development and refinement, correlate well with underperformance. They are definitely the two factors that we always consider when assessing doctors and should be considered together, as they depend on each other.12