Moving on from clinical practice

Non-vocational degrees are broad enough for graduates to ponder on which way their careers might develop as they meander through undergraduate life. English, maths, and the humanities, to name a few, allow graduates breathing space to consider their options. Some would see this as a benefit: there is no burden of expectation, and things remain flexible. And some would view this as a disadvantage with no clear career path or likelihood of employment in a definite sector.

Medicine, on the other hand, leads graduates down a structured path into their chosen career, on the basis of a choice that was usually made—in most of Europe, Asia, and Australia—at around age 17. Medical graduates are signposted through the next steps of training to full qualification. Although there are choices to be made within medicine, the broad direction is set.

Should medical graduates feel obliged to follow this set path? If medical school and the reality of practising as a doctor don’t match up to expectations, should medical students go off piste? What are the alternatives, and how feasible and realistic is it to look outside the clinical sphere?

In the United States, medical school is at postgraduate level, after completion of a general undergraduate degree—typically four years at each stage, taking the average age for starting medical school to 24.1 Is this a more sensible age to make a decision about a lifelong career? 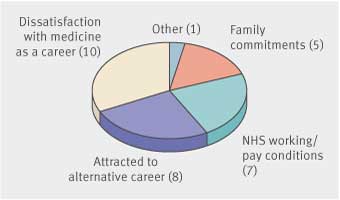 Reason for leaving medicine as a career. More than one reason can apply. The frequency of responses is in parentheses. Adapted from BMA cohort study 1995.2

Other cohort studies have found the number of doctors leaving clinical practice permanently to be substantially higher, ranging from 17% to 21% of doctors.34

The popularity of the conference Medical Success,5 an annual event specifically aimed at providing alternative career guidance for doctors, indicates that there is a sizeable interest in career change among the medical community—and among their potential future employers. And the website doctorsforbusiness.com caters for doctors looking to make their next career move.

So what careers do trained medics tend to go into? Here we speak to five doctors who have made the leap to the other side and find out what they’re doing and how they did it.

Stacey made the move from GP to medicolegal adviser at the MPS in 2003.

“I’d always had an interest in ethical and legal matters, so I thought that pursuing a career with the Medical Protection Society was perhaps something I’d like to look at.” He took the plunge and applied for a position at the MPS—and was successful in being selected.

He explains that there are similarities in the two roles: “In general practice you might be seeing patients when they are vulnerable because of illness. And it’s similar in the role of medicolegal adviser because you see doctors who are in difficult positions who are subject to criticism, and it’s really rewarding to work with them through those difficult periods and help them come out the other side.”

Stacey goes on to say: “There’s not one day that’s the same. There’s never a call that you take on the telephone that’s the same. And you never fail to be surprised at some of the difficulties doctors get themselves into.”

And if other people were thinking of going into the world of medical law, what would be his advice? “Well, I think the first thing is you must have a real desire to assist a colleague when they’re in difficulties. And I think the other qualities largely mirror the qualities required of a good doctor—so the obvious one is good communication skills.”

And does he miss the life of a GP? “It’s been a very diverse and challenging career, and while I loved being a practitioner, I’ve had no regrets about moving into the medicolegal field.”

Dissatisfaction with the NHS and the lure of travelling prompted Harris to rethink the traditional path into clinical practice.

Harris says that, despite enjoying medical school, when he became a house officer “the reality of working in the UK NHS wasn’t quite what I was expecting. And I didn’t have particularly nurturing or mentoring experiences while I was a house officer.

“And I’d always had a passion for travelling, and it happened that I had an opportunity to go and live and work in Brazil. And it was there that I started working as a GP in their primary care system.”

And how does public health work compare with the one to one contact with patients? “What’s attractive about it is that your potential impact on the health of communities, of populations of the nation as a whole, is essentially multiplied,” he says. “You’re able to work closely with policy makers and decision makers—whether at local, regional, or national level.”

“I always knew I wasn’t going to be a career doctor for ever,” says Rajapaksa. “And I think the catalyst that made me jump ship was things that were out of my control: there was Modernising Medical Careers and the European Working Time Directive, which cut the hours and changed the way that doctors in the NHS work.”

She explains that her role is not that of a typical consultant: “It’s a clinical advisory role; it’s strategic development—developing health products; and it actually involves a lot of global work,” she says. “In the past six months I’ve travelled to the Middle East and to Australia, helping to design new hospitals from scratch, as well as improving existing services.” Her work also looks at how technology can be better utilised in healthcare—for example, using innovative solutions to reduce healthcare acquired infections.

And what advice does she have for others? “There were two things that people said to me when I decided to quit my secure future in the NHS,” she says. “One was: you’re crazy. That was probably said more than anything else. The second one was: you must be brave. And I think, to be honest, I was a bit of both. I was crazy because I left my training number before I had something secure, but I just knew it was the right thing to do. I had that gut instinct that drove me.

“But I was also brave to say, actually, I’m not going to be scared of seeking new pastures. And I think this is important to stress—I had such great transferable skills as a doctor: I was a people person; I was good at communication; I could work in a team; I could think well; I could lead well in stressful circumstances—all of those things we take for granted because we’re doctors, but in the business world, they’re really, really important. And that’s why doctors who embrace those and develop those do well.”

After completing medical school and an MB PhD programme at Cambridge, Crotaz made the difficult decision to leave medicine and pursue a career in management consultancy.

As he approached the end of his training Crotaz considered various medical specialties, but nothing seemed right. “I thought that maybe the answer is actually that there isn’t really a role in medicine that I feel that I’m a good fit for. So I started at that point to look at alternatives.

“It was quite a difficult decision because I’d invested eight years in medical training, but I think that you get to that point where you need to make a decision about your long term career.”

Having realised that it was a now or never sort of moment, he made steps into management consultancy directly after completing his MB PhD.

He says that to make the change you need to have drive and persistence: “That’s the thing that’s going to get you through when you suddenly realise that you were a qualified doctor, you were assisting in surgery, and now you’re sitting by a computer and somebody’s telling you to align these two squares on a slide, and you just have to align the two squares on a slide because that’s your job.”

“I always wanted to be a manga artist from the start. But I became a doctor. The large part of that was because of family pressure,” Wijaya explains. “So I gave in to that pressure, but at some point I wasn’t too happy with my choice and was in crisis—I was thinking of what I wanted to do with my life.”

After working in medicine for two years she returned to her home in Jakarta for a break and to assess her options. By chance, a friend told her about a Japanese manga artist who was running classes in Jakarta, and she enrolled. The manga teacher told her that she had a real talent and “that there’s a possibility that I can become a professional if I pursue this path.” From here Wijaya, who is Japanese by origin, went to manga school in Tokyo.

“I didn’t want to do medicine half heartedly and do manga on the side, because I wanted to pursue my career path all the way. So I decided that I’m going back to my roots,” she says, “and what I really want to do with my life is to write manga for a living.”

She explains she didn’t want to miss the chance of pursuing her dream because of fear of the unknown: “If I cower up and say no, I don’t dare to even dream of the possibility that I can succeed in this field, I am probably going to blame myself 20 years on,” she says.

“And whenever I get my work published I get positive responses from people. It’s the kind of joy that I couldn’t trade for anything else. People I’ve never ever met in my life before and here they are, they’re reading my stuff and they say this is great, we want more. It’s just a great feeling. More than anything, more than the money, more than everything else.”

These case studies show that there is room for manoeuvre from the set path of a clinical life and that although most doctors are confident and happy in their choice of career, some will want to explore other avenues.

Other former doctors of interest include the British comedian Harry Hill, who cites his worst job as junior doctor at Kingston hospital as a reason for leaving the profession6; the blogger and founder of MacRumors.com, Arnold Kim, whose hobby turned into a lucrative business; and the clinical director turned hairdresser Roger Tackley.7