Safer administration of insulin: summary of a safety report from the National Patient Safety Agency

Insulin has been identified as one of the top 10 high risk medicines worldwide.1 Errors are common—the first national audit of over 14 000 inpatients with diabetes in England and Wales published recently showed prescribing errors in 19.5% of cases.2 Not only are mistakes common, they often lead to harm. One comprehensive five year study of adverse drug events in the United States found that 3% of medication errors related to insulin, but these errors were also twice as likely to cause harm as errors for other prescribed drugs.3 Errors relating to insulin arise because insulin has a narrow therapeutic range and requires precise dose adjustments with careful administration and monitoring.4 Over 20 different types of insulin are in use, in various strengths and forms, and with a range of delivery devices, including insulin syringes (from vials), insulin pens (prefilled or reusable), or infusion pumps (British National Formulary, http://bnf.org/bnf/index.htm). Staff may not be familiar with the safe use of different devices or the complex range of products now available. Studies show knowledge gaps among non-specialist staff in hospitals5 and in community settings.6

From August 2003 to August 2009, the National Patient Safety Agency (NPSA) received 3881 incident reports involving wrong insulin doses. The NPSA identified two common preventable errors relating to dose errors: using abbreviations when prescribing insulin; and failing to use insulin syringes. Reports described one death and one incident of severe harm caused by administering doses at 10 times the correct dose (errors that arose from abbreviating the term “unit”) and three deaths and 17 other incidents as a result of inappropriate use of intravenous syringes.⇓ ⇓ These incidents are likely to be under-reported, given other evidence of widespread errors. Other commonly reported incidents related to the omission of insulin (leading to hyperglycaemia), which was addressed by separate NPSA guidance in February 2010 (www.nrls.npsa.nhs.uk/alerts/?entryid45=66720) and will not be included in this summary. 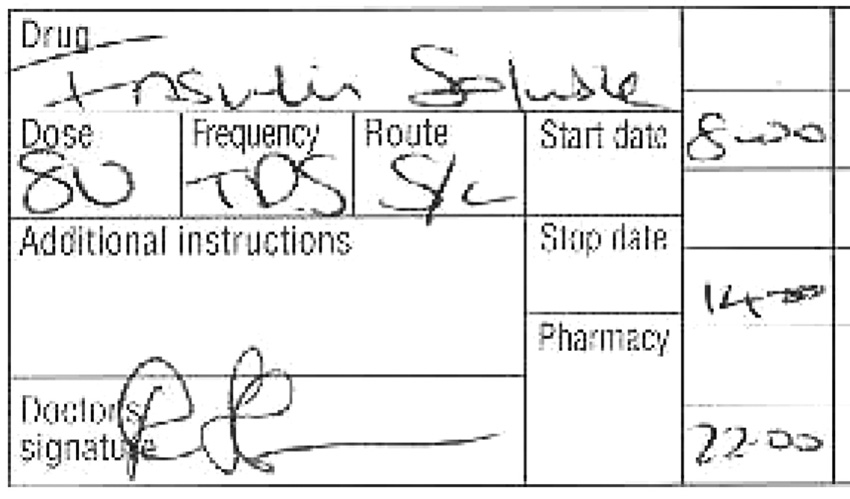 Ambiguity in prescription of insulin 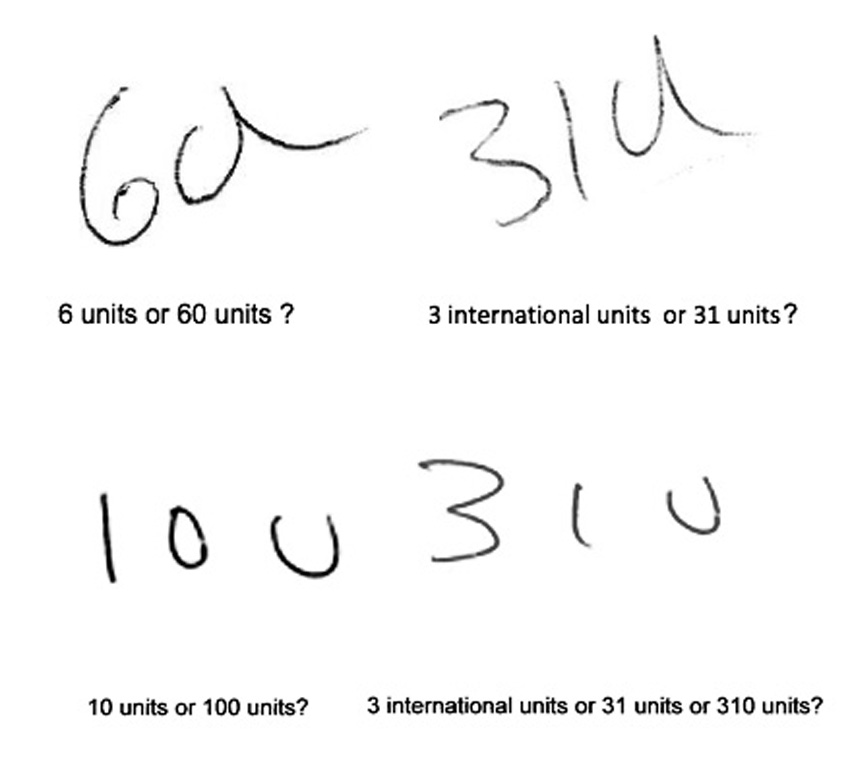 A typical incident report reads: “A patient on the GP unit was prescribed 10 units of Glargin insulin. At midday, two qualified nurses checked the medication chart and both read it as 100 units. This dose was then administered. The patient became ill and was transferred to the acute trust where her blood sugar level was recorded as 0.5. Hypostop was administered and blood sugar levels recorded at 8.4 and then 12. Patient died in A/E [emergency] department at 0400 hrs.”

This summary is based on a safety report (known as a “rapid response report” or “RRR”) on safer administration of insulin, with key actions for staff. The report was issued by the National Patient Safety Agency in June 2010 (NPSA/2010/RRR013, www.nrls.npsa.nhs.uk/resources/type/alerts/?entryid45=74287).

What can we do?

To reduce errors in insulin dosing and administration, the rapid response report recommended system changes, including ensuring access to appropriate equipment (insulin syringes) and training programmes for staff. An e-learning package (available at www.diabetes.nhs.uk/safe_use_of_insulin), with self certification modules for foundation year doctors and others, was developed by NHS Diabetes to accompany the rapid response report.

What else do we need to know?

In response to the most serious and preventable insulin dosing incidents reported, the rapid response report focuses on staff training and avoiding abbreviations when prescribing. Although the safety literature shows that training and education are relatively weak interventions to reduce error,7 the complexity of insulin products and devices and confirmed knowledge gaps makes this a good place to start.

The National Patient Safety Agency is also working closely with national partners (www.diabetes.nhs.uk) to devise “deeper” system solutions. These include safer design features for both paper and electronic inpatient insulin charts8; development of patient-held records; and working with patients to improve self administration of insulin in hospitals.

During the development of this guidance concern was raised about the use of higher strength insulin products (500 units/ml) for patients needing larger insulin doses. These products are licensed in the United States, where their use is more widespread. In the United Kingdom, a small amount is imported as unlicensed medicine and for giving on a “named patient” basis. Currently, no 500 units/ml syringes are available and there is potential for confusion and dangerous error. The National Patient Safety Agency supports the introduction of dedicated 500 units/ml insulin syringes, which are now being developed by manufacturers. Great care is needed to ensure that these high strength products are clearly labelled, kept separate from all other insulin products, and given only by staff and patients trained in their use.

How will we know when practice has become safer?

All NHS organisations were given until December 2010 to comply with the actions in the rapid response report. Organisations are also encouraged to audit practice against the actions required by the report—for example, to take a sample of prescriptions and check for use of abbreviations. Future iterations of the national audit of inpatients with diabetes2 should help to identify trends over time in improving insulin safety.

See other articles in issue 7778

11 responses
Email to a friend