“You are HIV positive”

A medical student describes what happened after hearing these words

I am a medical student-an articulate, hard working, and passionate person who wants to serve as a doctor. I am not at the top of the class, but I try to involve myself in everything that medical school has to offer. Friends would describe me as bubbly, extraverted, and a chatterbox. Two months ago, though, I was told, “You are HIV positive.” 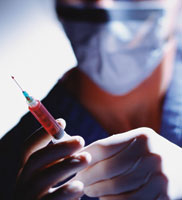 Nothing can prepare you for those nauseating words. My sympathetic nervous system kicked in, I became flushed, sweaty, and detached. I felt I was being sedated. Immediately I thought about my career, my relationships, and how my life had been ripped away, all in a 10 minute consultation. You might think that being a medical student would help in some way. We are taught to empathise with patients, and it is imperative that we try to do so. Remember though that we can never fully understand what is going on in a patient's mind when we break bad news. The words “you are HIV positive” are the only ones I remember from that first consultation.

The health adviser allowed me to speak. She established that I did not have any suicidal ideas and that a support structure existed when I went home. My instant reaction was, “Yes, I'll be fine.” After all, I am training to be a doctor. I must be able to cope with this.

No laps for comfort

The truth was I was not fine. I did not have anybody to turn to. My parents, who would be distraught if I disclosed my diagnosis to them, have their own misconstrued prejudices about HIV-“a disease for gays and druggies.” This prejudice is not limited to my parents, and is even found in some health workers and medically related websites in the United Kingdom.

My closest friends were too far away to visit, so that left my friends and colleagues at university. The sad thing is, before I could reveal my secret to the people I thought I could trust at medical school, I was stopped in my tracks. All it would take was one person to slip up, and my secret would make its way through the medical school rumour mill. Although we are meant to maintain confidentiality, people sometimes need to talk. It would not be fair to place that burden on a colleague.

So, frightened by the possibility of being found out, I travelled more than 100 miles out of my school catchment area to have blood tests. Even somebody like me, who hated the stigma attached to HIV, continued and continues to perpetuate this stigma because of a fear that people will change because of my “dirty blood.” At least not telling anybody allowed me to carry on as usual, without people judging me for this incurable condition. Although I could hide it from my friends, I could not keep this information from the medical school forever. Professional practice dictates that doctors or medical students who have a communicable disease also have a duty to self regulate and to seek advice from the medical school or occupational health.

I did not envisage opening up to anybody quickly, but I ended up in a flood of tears telling my personal adviser's assistant. The biggest problem was using the term HIV-for a long time it was physically difficult to use the words at all. It did not help that some of my lecturers had used terms such as “the big one” or “the plague of our time” to describe the condition. I would say, “I have the worst sexually transmitted infection,” when speaking about the diagnosis.

I have been lucky: both my tutor and assistant showed empathy, kindness, and compassion. The people I told have all treated me with respect and dignity, and the transition from student to student with a communicable disease has been relatively easy. The same understanding and compassion may not have been offered at other medical schools. By sharing my diagnosis with other people, of course, I also had to share the events that led to contracting the condition.

At medical school we are taught about groups at high risk of infection with HIV. And much to my mother's and father's unhappiness, I do fall into one of these groups. It was not this risk in itself that led to my contracting the virus. In 2003, I “came out” and decided to go to a gay club for the first time. I did not drink alcohol at that point in my life, and I had never had heterosexual or homosexual sex. But I was naive. The next thing I recall was waking up with my trousers below my legs and feeling pain all over.

In hindsight I should have spoken to the police immediately so they could collect evidence. I should have told my parents about what happened. I should have gone to the emergency department and collected postexposure prophylaxis. And I should have had immediate sexual health advice. I foolishly failed to do any of that. If it happened now, experience and confidence would make me handle the situation differently. I preferred to bury my head in the sand. I had been raped and could not face being violated again at a police station or hospital. And being gay added more insecurity that I felt unable to discuss. The thought of going through the criminal justice system, with little chance of justice being achieved, was unbearable.

The UK General Medical Council states that doctors should remain respectful and non-judgmental when working with patients and colleagues, but we are in a vocation that relies upon judgment to make diagnoses. My tutor and some friends have described the route of transmission in my case as similar to getting a needlestick injury or having a transfusion with infected blood-something beyond my control. I agree, in some ways. But nobody wants to get HIV, and no matter how it is contracted, as a profession, we must break down the barriers that still exist around HIV.

At my first follow-up meeting I spoke to three patients in a specialist clinic. “Guilty,” “a second class citizen,” and “dirty,” were descriptions of how they felt when they came into contact with some health professionals. One woman had been refused treatment by a dentist, although the General Dental Council says that this is a disciplinary offence. But I can understand why people are afraid, even at medical school, because HIV has a special status because of the disaster it has unleashed upon humanity.

We must want to end the stigma attached to HIV while raising awareness of its serious health burden. Politics often hinders speedy progress, and it is speed we need. Should we lead the way by having universal and regular testing for all health professionals? Should we stop treating testing for HIV as a “special blood test” and make it part of routine screening if it forms part of differential diagnoses? As medical students we must raise the debate on these issues if we are ever to break the taboos surrounding the condition for both our profession and our patients. The fact that more than a third of patients with HIV in the UK are unaware of their status shows that we still have a long way to go.

My school followed guidance laid down by the General Medical Council and Council of Heads of Medical Schools and embraces me as a student with additional requirements. But while researching my career as a doctor, I found that leadership in some medical schools takes a negative approach to students with blood borne viruses. Some deans even say that students with HIV should not be permitted to continue studying medicine. To those deans and leaders with intolerant attitudes I reaffirm the point that lots of roles exist that I can fulfil in the NHS and in academia. In practice, the health of patients will never be put at risk by me because I am aware of my condition. For that reason, there seems no justifiable reason for not allowing me to continue my studies.

When you become part of the medical profession, if you come across a colleague with a blood borne virus remember that they may not perform “exposure prone procedures.” These do not include venepuncture, arterial blood gases, or central lines but include tasks that involve placing your fingers in a body cavity with a sharp object-mainly surgery. So if you ever work with a colleague who cannot do these procedures, please do not exclude them from other clinical work because you think they should not be there. Only occupational health and the doctors themselves should be making those judgments: you should treat them like any other of your other colleagues. This is one of the biggest things you can do to ensure that as a profession we start to normalise the condition.

I consider myself lucky. The NHS will provide me with life saving drugs. I may die prematurely of Pneumocystis carinii pneumonia, sarcoma, lymphoma, encephalopathy, toxoplasmosis, carcinoma, and the rest. With the proper management though, chances are I can live a long and healthy life.

I pray for the day when everyone can enjoy equity of treatment. But this will only happen when patients, doctors, business people, and politicians take a real stance on HIV.

You are HIV positive

I thought this article was incredibly insightful and courageously written piece. I hope the writer's honesty can help other medical professionals going through similar experiences to reassert their rights to practice without unfair discrimination. Not only does the article highlight the stigma of HIV but the silence of an incident of rape, which unfortunately is known to be a highly unreported crime. After all the “World Aids Day” publicity, I think the familiarity this case presented was a really effective way to communicate the relevance of HIV to every aspect of our lives. It would be very interesting to follow his career so that we can see how attitudes may change or challenge him during his medical practice. I cannot stress enough the bravery of this student. He has shown the potential to become a most sensitive and competent doctor.

You are HIV positive

I applaud the author for his bravery at confronting the issue of blood borne infections, which, of course, is a constant worry amongst all surgical trainees especially.

Having seen colleagues in the past suffer from needle stick injuries, i feel many turn away from seeking adequate help and advice for fear of discovering transmission of blood borne virus.

I wish to take this opportunity to remind those who find themselves in that situation, that the risk of transmission is low and that prophylaxis is in place to further reduce these risks so it is absolutely paramount prior to starting any surgical jobs, to be familiar with the needle stick protocols: ask your A&E department and seek advice from occupational health.

Finally, as i always say to patients with health related issues: Place your condition around your life, not vice versa.