Fig 1 Note the drooping of the upper eyelid and the smaller pupil on the right; the right side of her face was also dry to the touch. 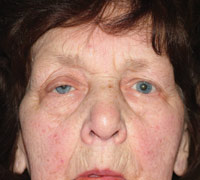 Johann Friedrich Horner (1831-86), a Swiss ophthalmologist, published the first full clinical description of the eponymous syndrome in a 40 year old woman, Anna Brandli, in his 1869 treatise, Uber eine Form von Ptosis [on a form of ptosis].1 However, others before him had recognised the syndrome, notably Edward Selleck Hare (1812-38), an English house surgeon, in 1838,2 and Claude Bernard (1813-78), a French experimental surgeon, in 1852. The latter performed meticulous experiments in rabbits and dogs and showed that “division of the cephalic portion of the great sympathetic” nerve was followed by miosis, ptosis, enophthalmos, relaxation of the nictitating membrane, reduction of intraocular tension, decrease in the size of the nares, and an increase in temperature.34 Thus, oculosympathetic palsy is sometimes also referred to as a Claude Bernard syndrome or Bernard-Horner syndrome. 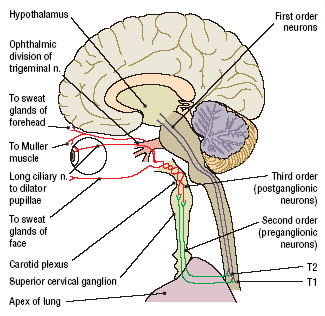 Association of carcinoma of the apex of the lung or Pancoast's tumour (Henry Khunrath Pancoast (1875-1939), American radiologist) 6 with destructive lesions of the thoracic inlet and involvement of the brachial plexus (resulting in wasting of hand muscles) and cervical sympathetic nerves (resulting in ipsilateral Horner's syndrome) is known as Pancoast's syndrome.67 Although Pancoast's tumour is the most important cause of Horner's syndrome, 6 it can result from numerous other lesions as well (box 1) 8 and treatment, where possible, should be directed at the underlying cause.

Base of skull tumours

Demyelinating disease (such as multiple sclerosis)

Drugs (may affect any region)

Antipsychotics (such as thioridazine, trifluoperazine)

Opiates (such as diamorphine)

Anti-parkinsonism agents (such as levodopa)

Anti-hypertensive agents (such as guanethidine, reserpine)