As a medic, being diagnosed with a progressive chronic disease can not only affect your working and social life, but also how you act as a patient. Here, a doctor talks frankly about how she was diagnosed with sarcoidosis as a medical student and gives some tips about coping

Five years ago I was an energetic medical student who had just returned from a life changing elective in South East Asia. I thought I was on the path to fulfilling my dreams. Instead, I inadvertently stumbled into dangerous uncharted territory--ill health.

At first I put my worsening myalgia and generalised joint pains down to a change in weather, diet, driving distances--anything really. But as the weeks progressed, immense fatigue set in. With a gradual loss of appetite and the subsequent weight loss (great at first) came eye problems and painful lumps on my legs. Then the dry cough became more and more persistent.

According to rheumatology, I had reactive arthritis and was started on anti-inflammatories. According to tropical medicine, I had one of three possible tropical diseases given my recent travel abroad. The dermatologists wanted a biopsy of my painful shin lesions. The ophthalmologist diagnosed anterior uveitis.

I read a general medicine textbook, trying desperately to put the pieces of the jigsaw together. I decided that I needed a chest x ray, something I had not had so far. My wonderful general practitioner kindly arranged for my medical student whim to be satisfied. It turned out that I had gross bilateral hilar lymphadenopathy. I was referred to hospital urgently for further tests and had to go on sick leave from medical school.

It took two agonising weeks to confirm that I did not have lymphoma or tuberculosis but probably had sarcoidosis--“a multisystem disease of unknown aetiology.” A six word definition was to change my lifestyle, body image, personality, finances, sense of humour, and my ability to work as a doctor. I was devastated. I struggled on at medical school, partly in denial and partly due to dogged determination, until it became apparent that I would have to withdraw from the course.

Symptoms and side effects

I was started on high dose steroids and immediately my appetite became voracious all the time. Within four weeks I had put on half a stone, had a moon face, and was fast becoming that “lemon on a stick” that is described in textbooks. At every appointment I hotly debated the use of steroids with my ever-patient consultant and eventually put myself on my own reducing regimen.

My consultant rode the storm with me patiently but firmly, warning me of irreversible lung fibrosis if I did not comply with treatment. So I reluctantly persisted, and my symptoms gradually improved. The visible side effects worsened, and I continued to eat everything in sight.

The shallow and the tolerant

Six months later, I went back to restart my final year at medical school and immediately realised how image oriented society is, even among people who are supposedly the most educated, learned, wise, and impartial.

But there were also the kind and the tolerant ones who coaxed, pushed, chided, and encouraged me towards my graduation six months later than expected. I had finally achieved my aim. 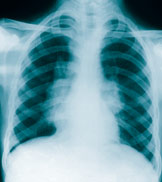 It took me a long time to accept that there is no cure for my illness. So why do I continue working in an often unsupportive environment with unrelenting pressures? The bottom line is that I enjoy what I do. I have worked in the worst possible system with the darkest side of human nature but I have also worked with the best the NHS can offer with the most inspiring doctors and the best teams. The latter spurs me on.

So what I have learnt from living with a chronic illness, working as a doctor, and being a patient? I try to achieve a balanced lifestyle and hope the following points may help if you find yourself in a similar situation.

The author wishes to remain anonymous but is willing to answer emails from other doctors with chronic illnesses. Please send any correspondence to rmacdonald{at}bmj.com. All emails will be treated with confidence.

The article says a lot about the mental strength of the author. It is important for all to learn that it is very easy to offer advice and counsel a patient but when it comes to one's own self, things may not be as easy as one would like to believe. As they say, doctors make the worst patients. In such a scenario, such display of courage and practicality is commendable.

The job at hand for doctors is not just diagnosing the illness and treating it medically but also to help the patient cope with it mentally and live with it, especially when dealing with chronic illnesses. To realise that to spend each day as it comes is the way to be, is winning half the battle. I'm glad that the author has reached a stage where s/he is able to do just that, being both ‘doctor’ and ‘patient’.