Is conscription a thing of the past? Not for some around the world. Peter Cross investigates how medical students are obliged to spend time in the army after they qualify

The time it takes to train as a doctor has increased in recent years. Intercalated degrees, once a minority pursuit, have become commonplace. In the United Kingdom, the preregistration house officer year will expand into a two year foundation programme at a time when more medical students are taking gap years. The time it takes to become a fully registered doctor is getting longer. Adding to this, in some quarters there is even talk of bringing back conscription. 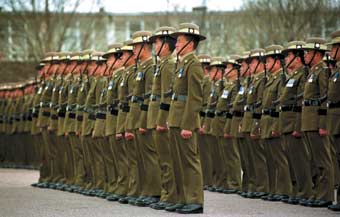 Conscription is legislation requiring all able bodied men to serve in the armed forces. In some countries, such as Israel, women are also compulsorily enlisted. Conscription ended in Britain as the 1950s dissolved into the '60s, with long hair quickly superseding sensible haircuts that the military demanded. Conscription in the United States ended with the withdrawal from Vietnam.

But conscription has not gone away. In Austria, Greece, and Israel, for example, young people are taken from their homes, shown how to polish boots, shoot a rifle, empty toilets, get drunk, and bond with other blokes.

In the United Kingdom and United States, conscription seemed a thing of the past. However, during the recent campaign in Iraq, the media raised “bringing back conscription.” British troops are mostly recruited from lower social classes. Conscription, it was argued, would spread the risk more evenly. If conscription were to be reintroduced for, among others, medical students, what would it be like? Does being barked at by a bullying sergeant major make medics better doctors?

“I'd have a problem losing one year or half a year in the army. It is a lot of time to be wasting,” says Romanian medical student Irina Haivas. Irina has choices. As a woman she is not conscripted. Her male peers have no choice. “Boys are obliged to do medical service,” she explains, “it lasts for half a year if you finish university and nine months if you don't.”

Many Romanian medical students postpone conscription as long as possible. “You can't do it in the middle of your university studies, only after you finish,” explains Irina, adding that medical students often study for masters degrees or other postgraduate courses putting conscription off further. Less academic students become more creative, “They say they have medical conditions that would bar them from doing it.” She says she knows students who have convinced doctors they have flat feet or joint problems that would prevent them from running.

But most Romanian male medical students are conscripted. “My friends who have been in the army don't like it very much. They say that you learn a lot of things, but it shouldn't be compulsory. It is especially difficult if you live in a democratic country where you are supposed to be free.” One of the main problems, according to Irina, is that the army is authoritarian: “the ideals are very good, but the ways they are applied are not.” One of her peers looks back on his conscription as good experience and believes it has made him want to be more responsible and successful. Nevertheless, he does not intend to stay in the army. He thinks some students will not be able to readjust to civilian life. “The army means executing orders and makes people into robots,” says Irina.

Despite this, Irina believes there are potential advantages for medical students. “Military training could help medical students function in extreme conditions, ” she supposes, “learning how to cope with fear may help doctors. I wouldn't mind doing it for a month in the summer holidays. It would be new and exciting.”

“Greece has been scourged by conflicts. Wars, invasions, and military crises have been part of everyday life,” says Greek medical student Panos Alexopoulos. “The Hellenic Republic would not have been in the position to guard the freedom of its citizens without an efficient and well trained army,” he claims.

Every Greek man is obliged to serve in the Greek armed forces. The duration is 15 months in the air forces, 12 months in the army, and 17 months in the navy. One month's training emphasises the use of weapons and ways to survive during battle. Panos feels it is unfortunate that training focuses on the war conditions of the past, which he feels bear little relation to today's high tech wars.

“Military service is a way to experience socialism and to consolidate social unity,” says Panos, “armies are structured along socialist values. Young doctors and young farmers are treated in the same way by the army officers. In order to fulfil the purpose of effectiveness, unity is stressed at the expense of diversity.” Military service is often a culture shock for young Greek men.

Panos is quick to highlight potential medical training opportunities: “In Greece, military service is a golden opportunity to gain medical experience. All conscripted doctors are involved in the military health care system. They acquire key medical skills.” Like Irina, Panos believes that, at best, conscription can be “a step forward towards pursuing a successful medical career.”

Although Deborah Mayne is undecided whether conscription would be good or bad for medical students, she is quick to identify advantages, “It would instil a sense of discipline which seems to be lacking. It would also encourage individuals to exercise, useful as the population is getting more obese.”

Deborah spent her elective working as a medical attendant at a Gurkha welfare station. The Gurkha regiment is part of the British army made up of indigenous Nepalese men. “I lived and worked with Gurkhas over their busiest time of year. We saw several thousand over three days and treated their families.”

She describes her military adventure as “definitely good as I experienced medicine in a different field and under very different circumstances from a ‘typical’ Western hospital. Gurkhas were very friendly and always courteous. I ate dal bhat with them and had a whisky with them in the evenings. The officers were also very friendly and invited me out with them. They nearly convinced me to join.”

Deborah's military training helped her become more organised and precise. “Medical students would find it useful to understand field hospitals and gain an insight that you are not exposed to unless you join.”

“I'm not sure when you would conscript people,” wonders Deborah. On balance she feels, “It could be good before university, as you would be more mature, and possibly more sure about studying medicine. I would have loved it. Military service might even encourage people to consider it as a career.”