In September 2021, The BMJ and 50 BMJ Journals were among 233 journals across the world to simultaneously publish an editorial calling on world leaders to take emergency action to limit global temperature increases, halt the destruction of nature, and protect health.

The editorial was coordinated by the UK Health Alliance on Climate Change and published ahead of the UN General Assembly, one of the last international meetings taking place before the (COP26) climate conference in Glasgow in November.

This is the first time that so many journals have come together to make the same statement, reflecting the severity of the climate emergency now facing the world.

Listen to Fiona Godlee, editor in chief of The BMJ, on Radio 4’s Today Programme this morning talking about the climate emergency and why we have published this editorial now: https://www.bbc.co.uk/sounds/play/m000zcd5 (Fi is on at 2:38:22 into programme).

The UK Health Alliance on Climate Change brings together the voices of doctors, nurses and other health care professionals within the UK to advocate for action to combat and prevent climate change, emphasising the substantial co benefits to health of tackling climate change in a fair and equitable way. The founding members of the Alliance include a range of royal medical and nursing colleges, the Royal Society of Medicine, the British Medical Association, The Lancet, and The BMJ. They are coming together to communicate the relationship between health and climate change to government and the health profession. 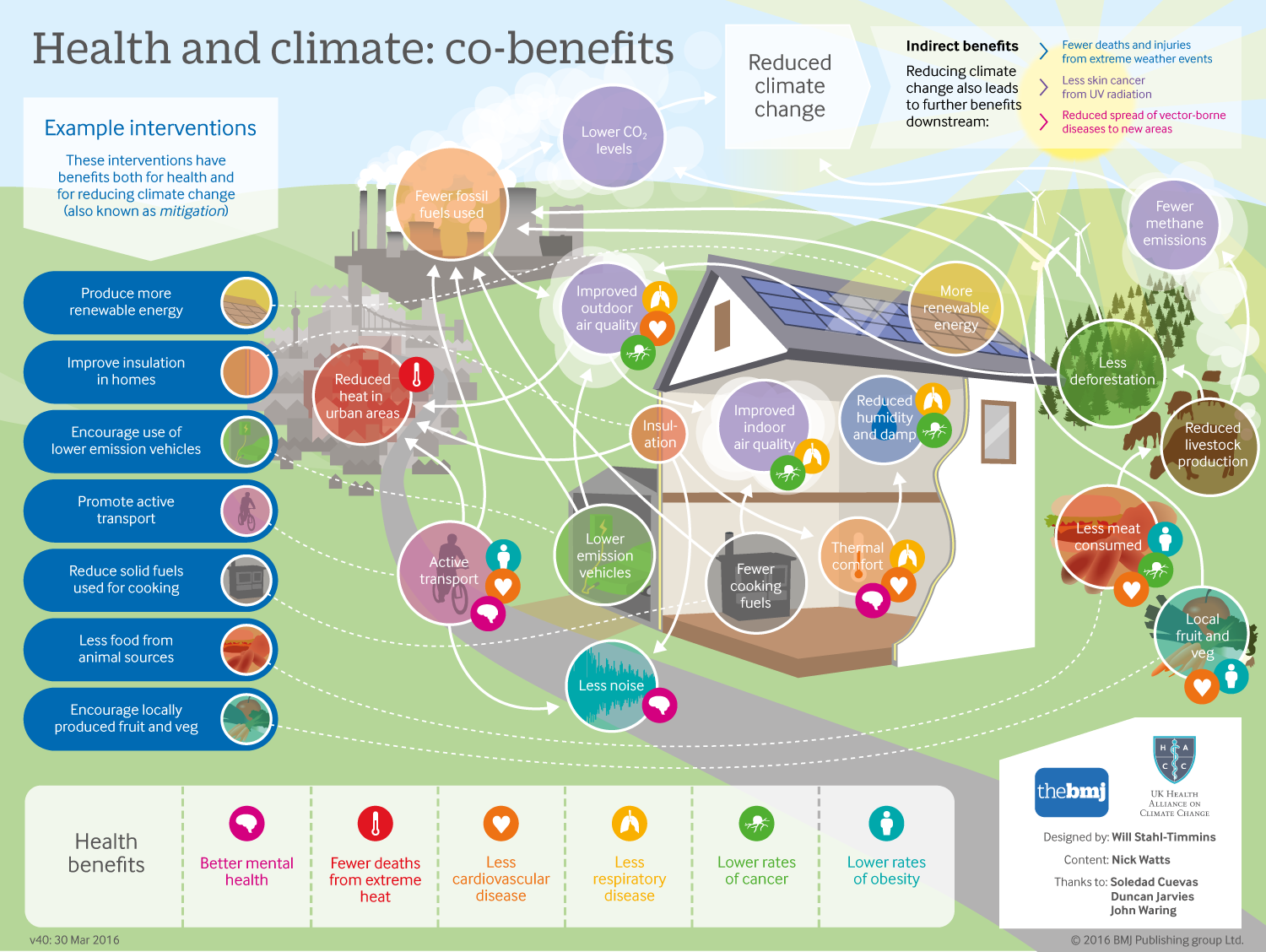 Taking on the twin challenges of air pollution and climate change, the alliance released "A Breath of Fresh Air" in October 2016. The report considers how integrated strategies could tackle both these challenges together. They recommend better collaboration between agencies and government departments, provide key targets for cutting CO2 and improving air quality, and encourage health professionals to do more. 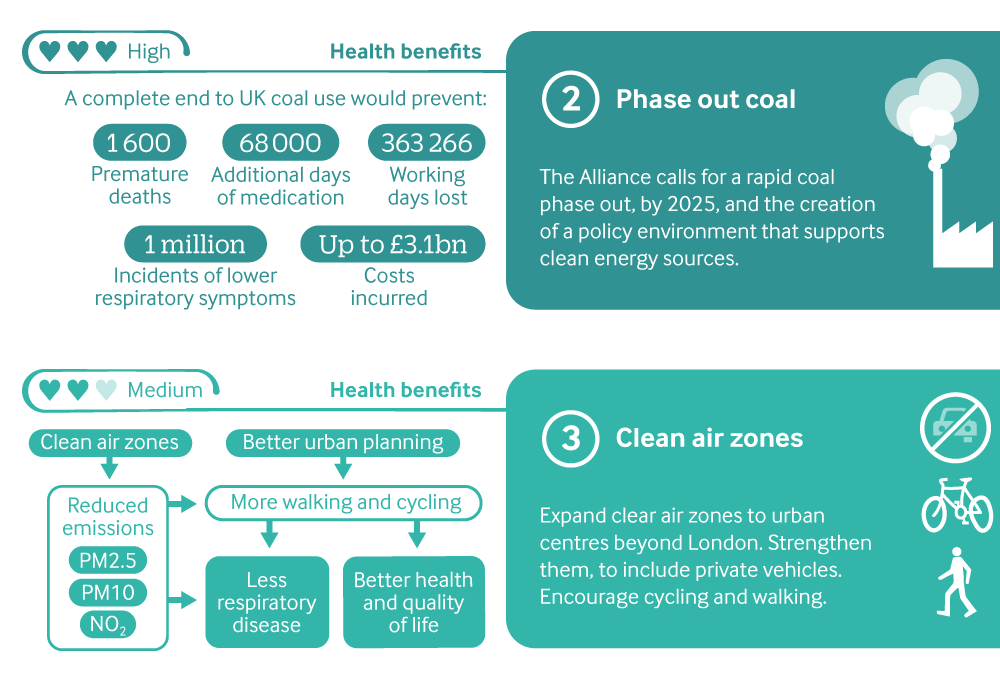 Read Frank Kelly's editorial in The BMJ, which sets out the context and discusses the importance of the report.

Climate change and The BMJ

In June 2015 The BMJ's editor in chief Fiona Godlee and former editor Richard Smith were among more than 50 senior doctors and academics to urge the Wellcome Trust to divest from fossil fuel companies.

Their letter, part of the Guardian newspaper’s “Keep it in the ground” campaign, urged the trust to support action on climate change by pulling all of its investments from the world’s 200 largest fossil fuel companies over the next five years.

Other signatories included Unni Karunakara, former president of the humanitarian organisation Médecins Sans Frontières; Nick Black, professor of health services research at London School of Hygiene and Tropical Medicine; Martin McKee, also from the London School of Hygiene; and Hugh Montgomery, a professor and director of the Institute for Human Health and Performance at University College London.

The BMA, which owns the BMJ Publishing Group, agreed to divest at its annual meeting on 25 June 2014. Find out more at this link.

In October 2014 The BMJ called on the World Health Organization (WHO) to declare a public health emergency on climate change.

Fiona Godlee said in an editorial that there is clear scientific consensus about the threat to human health and survival, and called on doctors and other health professionals to take a lead in tackling climate change.

The editorial coincided with the publication of an analysis paper that contained no medicine or healthcare at all.

The paper explained the science of anthropogenic climate change to help doctors become effective advocates against global warming through a better understanding of the science.

The Intergovernmental Panel on Climate Change (IPCC) has concluded that the world is getting hotter and that human activity is mainly to blame.

Global average temperatures have risen by about 0.5°C in the past 50 years and by 0.8°C from preindustrial times. The effect of these higher temperatures on weather systems is already being felt. Sea levels are rising due to thermal expansion of the oceans and the melting of polar icecaps and glaciers.

The IPCC warns that even with a radical cut in greenhouse gas emissions, starting almost immediately, global warming would continue, while with unabated emissions, temperatures could be more than 4°C higher than pre-industrial levels by 2100.

In some regions of the northern continents, temperatures could increase by more than 10°C with catastrophic effects.

Yet the health benefits of acting on climate change are substantial, argued Godlee.

For example, burning fossil fuels causes about seven million premature deaths from indoor and outdoor air pollution, she explains, while smog in Beijing and other major cities “is alerting the public and waking up our politicians in ways that the more invisible threat from carbon dioxide emissions has failed to do.”

Also in our hands is the substantial health dividend of more active and sustainable low carbon lifestyles: lower rates of obesity, heart disease, diabetes, and cancer, she added.

She acknowledged that WHO has shown important leadership on climate change but has stopped short of declaring a global public health emergency. “This may be understandable with Ebola raging. But it is what WHO should now do.”

She concluded: “Deaths from Ebola infection, tragic and frightening though they are, will pale into insignificance when compared with the mayhem we can expect for our children and grandchildren if the world does nothing to check its carbon emissions. And action is needed now.”

In April 2014 The BMJ editor in chief Fiona Godlee was one of 50 senior UK medical professionals to sign a letter in The Times newspaper about the health benefits of ending investment in fossil fuels, and diverting funds instead to alternative energy and more active forms of transport.

A week later the journal published an essay by Eric Chivian, an associate at Harvard University's Department of Organismic and Evolutionary Biology. Chivian argued that doctors are ideally placed to provide people with compelling, concrete examples of the medical consequences of climate change.

In 1980 Chivian started an organisation called the International Physicians for the Prevention of Nuclear War, which eventually included some 250 000 physicians from 80 countries, earning them the Nobel peace prize five years later.

Chivian's essay is one of many resources published by The BMJ highlighting the devastating impact of climate change, including a 2010 video about how the NHS can reduce its carbon footprint, and a 2012 "Spotlight" series of articles about the issue. 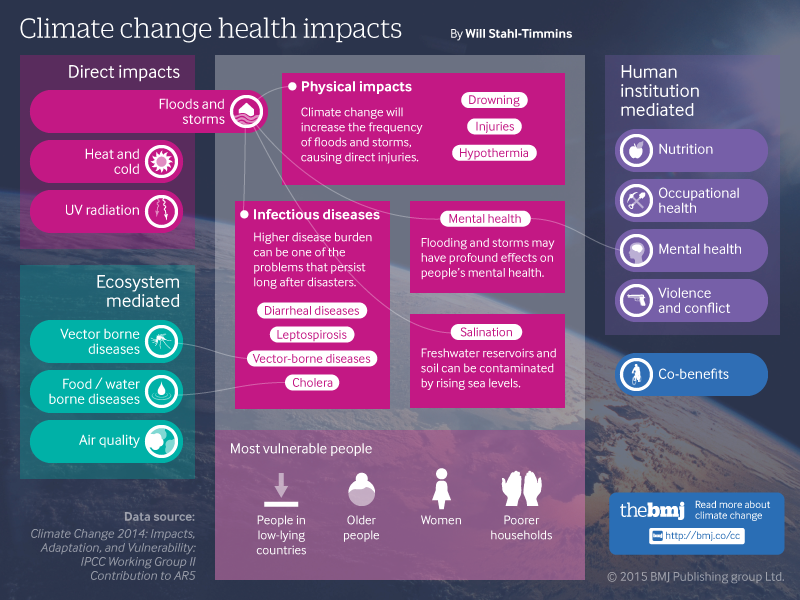