Survival analysis is concerned with studying the time between entry to a study and a subsequent event. Originally the analysis was concerned with time from treatment until death, hence the name, but survival analysis is applicable to many areas as well as mortality. Recent examples include time to discontinuation of a contraceptive, maximum dose of bronchoconstrictor required to reduce a patient's lung function to 80% of baseline, time taken to exercise to maximum tolerance, time that a transdermal patch can be left in place, time for a leg fracture to heal.

When the outcome of a study is the time between one event and another, a number of problems can occur.

We look at the data using a Kaplan-Meier survival curve. Suppose that the survival times, including censored observations, after entry into the study (ordered by increasing duration) of a group of n subjects are

The proportion of subjects, S(t), surviving beyond any follow up time (

is the number of subjects alive just before time

denotes the number who died at time

where i can be any value between 1 and p. For censored observations

Order the survival time by increasing duration starting with the shortest one. At each event (i) work out the number alive immediately before the event (r i). Before the first event all the patients are alive and so S(t) = 1. If we denote the start of the study as

= 1. We can now calculate the survival times

, for each value of i from 1 to n by means of the following recurrence formula.

Given the number of events (deaths),

and the number alive,

Example of calculation of survival curve

Mclllmurray and Turkie (2) describe a clinical trial of 69 patients for the treatment of Dukes' C colorectal cancer. The data for the two treatments, linoleic acid or control are given in Table 12.1 (3).

The calculation of the Kaplan-Meier survival curve for the 25 patients randomly assigned to receive 7 linoleic acid is described in Table 12.2 . The + sign indicates censored data. Until 6 months after treatment, there are no deaths, 50 S(t) 1. The effect of the censoring is to remove from the alive group those that are censored. At time 6 months two subjects have been censored and so the number alive just before 6 months is 23. There are two deaths at 6 months.

We now reduce the number alive ("at risk") by two. The censored event at 9 months reduces the "at risk" set to 20. At 10 months there are two deaths, so the proportion surviving is 18/20 = 0.90 and the cumulative proportion surviving is 0.913 x 0.90 = 0.8217. The cumulative survival is conveniently stored in the memory of a calculator. As one can see the effect of the censored observations is to reduce the number at risk without affecting the survival curve S(t). 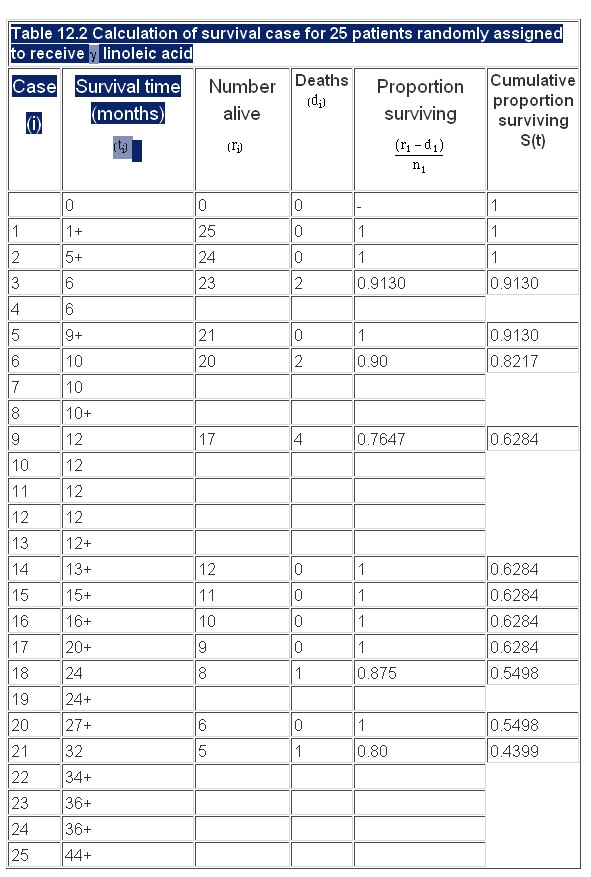 Finally we plot the survival curve, as shown in

. The censored observations are shown as ticks on the line. 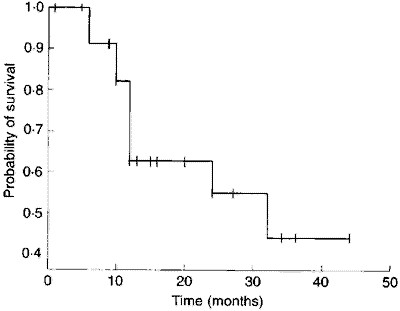 To compare two survival curves produced from two groups A and B we use the rather curiously named log rank test,1 so called because it can be shown to be related to a test that uses the logarithms of the ranks of the data.

The assumptions used in this test are:

We first order the data for the two groups combined, as shown in Table 12.3 . As for the Kaplan-Meier survival curve, we now consider each event in turn, starting at time t = 0.

At each event (death) at time

up to that point. If we had a total of events at time

The effect of the censored observations is to reduce the numbers at risk, but they do not contribute to the expected numbers.

In the same way that multiple regression is an extension of linear regression, an extension of the log rank test includes, for example, allowance for prognostic factors. This was developed by DR Cox, and so is called Cox regression. It is beyond the scope of this book, but is described elsewhere.(4, 5)

Do I need to test for a constant relative risk before doing the log rank test?

This is a similar problem to testing for Normality for a t test. The log rank test is quite "robust" against departures from proportional hazards, but care should be taken. If the Kaplan-Meier survival curves cross then this is clear departure from proportional hazards, and the log rank test should not be used. This can happen, for example, in a two drug trial for cancer, if one drug is very toxic initially but produces more long term cures. In this case there is no simple answer to the question "is one drug better than the other?", because the answer depends on the time scale.

If I don't have any censored observations, do I need to use survival analysis?

Not necessarily, you could use a rank test such as the Mann-Whitney U test, but the survival method would yield an estimate of risk, which is often required, and lends itself to a useful way of displaying the data.

12.1 Twenty patients, ten of normal weight and ten severely overweight underwent an exercise stress test, in which they had to lift a progressively increasing load for up to 12 minutes, but they were allowed to stop earlier if they could do no more. On two occasions the equipment failed before 12 minutes. The times (in minutes) achieved were:

*Reached end of test; **equipment failure. (I am grateful to C Osmond for these data). What are the observed and expected values? What is the value of the log rank test to compare these groups?

12.2 What is the risk of stopping in the normal weight group compared with the overweight group, and a 95% confidence interval?